Where are the Social-Justice Warriors on this? Why isn’t this labeled as racist but if it were an attack of opposite political values it is hailed as racist by the media?

Here is MORE on the below video:

Finally the violent stomping of a man by SEIU members is going to court. The video will be a big part of the trial. Rather than — or instead of — zeroing in on the violent nature of the left throughout history and American politics, I wanted to focus on one aspect of how the media portrays the indecent. This from Gateway Pundit, Nearly 2 Years After Beating – Kenneth Gladney Case Goes to Trial Tomorrow:

Twenty-months after he claims he was beaten by two union activists, while he tried to sell conservative buttons outside a Congressman Russ Carnahan town hall forum on health care reform, Kenneth Gladney now has a court date.

SEIU members Elston McCowan and Perry Molens are charged with misdemeanor assault. Both men pleaded not guilty and requested a jury trial.

Earlier, Gladney had complained that the delay in scheduling a trial was “political” and he pointed the blame at Reddington and fellow Democrat, County Executive Charlie Dooley.

Reddington countered that the delay was caused soley by the defendant’s request for a jury trial. Her municipal court system has no jurors, so she had to work with he state courts to set up a court room and a jury, Reddington said.

“Conservative buttons” vs. “Service Employees.” The question I have, have you EVER heard the media reference buttons or anything for sale at Democratic activist gatherings as “liberal buttons,” or, “progressive items for sale”? These buttons are in fact worn by Democrats and Independents who are part of the Tea Party. To say we are taxed enough already (T.E.A.) and top call the government to some fiscal responsibility is not a partisan concept. However, less spending does mean less government… this is where the basis for the difference of the parties kinda becomes partisan. But I digress. Would the media call this [above/right] a “progressive button? 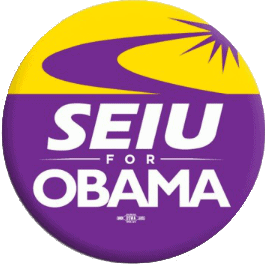 Somehow I doubt it, even thought SEIU stuff was for sale at the same event… you will never hear “liberal” or “progressive” used of any item or person by the media. This should come as no surprise since the following is believed by the majority of the press/media: