I have heard that Carly is thrilling the crowds… not with “pomp-and-circumstance,” but with answers and solutions. I hope she is on the stage in the debates!

Key Point to Memorize For Response:

NewsBusters has this GRAPHIC and UNNERVING post about who the public schools allow into our kids minds. Someone whom the Obama administration supports in their blind politically correct egalitarianism:

….Savage’s book, “Savage Love,” collects his column of the same name. On page after page the author and gay rights advocate scoffed at monogamy and recommended and condoned a range of aberrant sexual activities. Savage enthused about bondage, shrugged at child molestation fantasies and incest, and even encouraged a reader to indulge in his fantasy to lie in an empty tub and have a woman defecate on him.Even the introduction to “Savage Love” was riddled with filth. “Mostly I give advice to breeders – eating pussy for boys, sucking dick for girls, buttfucking for everybody – which is an odd job considering I’m one of those boys who doesn’t sleep with girls,” Savage wrote.

The word breeder is an offensive term for heterosexuals, and Savage often tells his readers so. “Once upon a time, ‘breeder’ was an insult – our little derogatory term for you heterosexuals. We whispered ‘breeder’ behind your breeder-backs, and some people are going to call you breeder whether you like it or not,” Savage said. The word breeder is found 80 times throughout the book – a particular irony coming from the most high-profile anti-bullying advocate in the nation.

But to Savage, bullying gays is about the only thing that’s out of bounds. “In my opinion, child molestation fantasies do not make you an evil person,” Savage replied to a reader’s inquiry.

To another, he condoned incest between a mother and son, saying, “But hey, you’re consenting adults. If you wanna bone ma, and she wants to bone you, well, more power to you.”

“People once thought bondage to be an unspeakable perversion, and anyone interested in bondage was sick. These days, outside my immediate family, it’s hard to find someone who hasn’t done bondage or doesn’t want to give it a try!” Savage wrote.

Savage’s perversion isn’t confined to sex acts. He regularly goaded readers to have affairs touting “If you’re going to cheat, then cheat honest,” and responded “Fuck the sanctity of marriage, what you’re really getting is a heap of social and financial benefits. Marriage is about rights, not monogamy.”

He continued that “Only fools would build marriages with monogamy as their foundation (and only a foolish society would demand such a behavior.)”

His answer to homosexuality was a clear mockery of traditional values. “Men are not straight because they think being gay is “morally wrong,” they’re gay cuz they wanna, gotta, fuck women. What your boyfriend, as a Catholic, was taught to believe about homosexuality (no! no!) is a conflict with what his dick is telling him (yes! yes!).

Drugs and prostitution aren’t off-limits topics for Savage either. “Drugs, alcohol and sex don’t mix? Really? Get out much? Not all substance abuse is abuse,” he wrote. Elsewhere Savage stated that “The human desire for psychoactive drugs is never going away – the war on drugs, however, can and should go away.”

This is the man who is able to reach millions of children via his “It Gets Better” bullying campaign. Although Savage is a zealous bully himself, he is endorsed by President Obama and the White House, and has said, chillingly, that  he will spread his message to children whether their parents want him to or not. Instead of hailing Dan Savage as an anti-bullying hero, the world need only read a sentence from any of his five books to see how foul the real Dan Savage is.

What a difference an election makes. NewsBusters has this little gem tucked away, and keep in mind this is a reason Bush scored low among us conservatives… he spent more and more on programs that need to be totally eradicated (like the Dept of Education):

MSNBC’s Chris Matthews and Andrea Mitchell have been telling viewers in recent days that Republicans considering blocking an increase in the debt ceiling could be creating a financial crisis.

Seven years ago after George W. Bush was re-elected and the debt ceiling had been raised in November 2004, the perilously liberal couple felt Republicans should be “embarrassed” for having done so (transcripts follow with commentary): 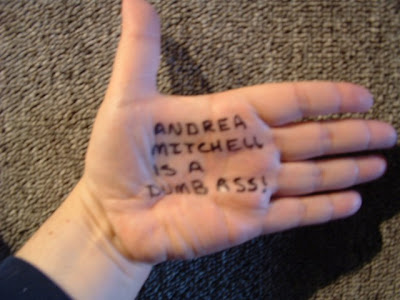 This exchange occurred on the November 21, 2004, installment of “The Chris Matthews Show.”

Yet as NewsBusters has been reporting, Matthews has in the past several days twice referred to Republicans as terrorists because they’re refusing to support a raise in the debt ceiling if it includes tax increases.

NewsBusters caught an example of the liberal mind in media.

In the span of a mere 50 seconds on Thursday’s NBC Nightly News, Andrea Mitchell managed to apply a conservative ideological tag four times to Pat Toomey, the Republican candidate for U.S. Senate in Pennsylvania, yet she failed to issue even a single label for liberal Democratic candidate Joe Sestak.

Sitting at the anchor desk with Brian Williams, Mitchell made clear Toomey “is a Republican fiscal conservative who was fiscally conservative before the Tea Party was cool,” soon repeating, in the narration for her story, how “Toomey is a former Congressman and a fiscal conservative” – all before driving home his ideology once more as she recalled that he “led a conservative Washington interest group.”