I cannot believe the level of bias at a site that is suppose to be representative of Santa Clarita’s Community. In fact, this Facebook page isn’t representing the SCV at all, it is the John F. Facebook Page. During a discussion about Coronavirus [for a laugh, see my Contagiously Funny Cartoons] I linked to my post answering a friend of the family’s query regarding the “worry level” of this seasonal “flu” (I link below and here to the difference via the CDC. It is less deadly that SARS, MERS, and the regular flu in the case of COVID-19. More below):

The above was taken down with the following note from JOHN EFFE.

To which I simply ask:

This kicked off some fun. You see… when I was responding to the strain I was driving and using hands free “talk-to-text” in slow traffic (I drive for a living). So I was not able to fully respond to my detractors, however — you can see how the conversation ends when I get behind my keyboard at home and trounce JOHN EFFE’s “fact-checking ability.” The sub-par (BIASED) admin input at this Facebook Page speaks volumes.

I will forego the some of the back-n-forth… but I merely wanted to get on the record just how bad the thinking is by lefties today. For instance, here is another reason JOHN EFFE gave for removing my post:

He is “technically correct.” It is known as a “novel influenza,” and in this case of the Wuhan Virus (Covid-19) is less deadly than plain influenza, SARS, or MERS. China — because of their family units mostly living under one roof with very communal activities — are the bulk of the stats: 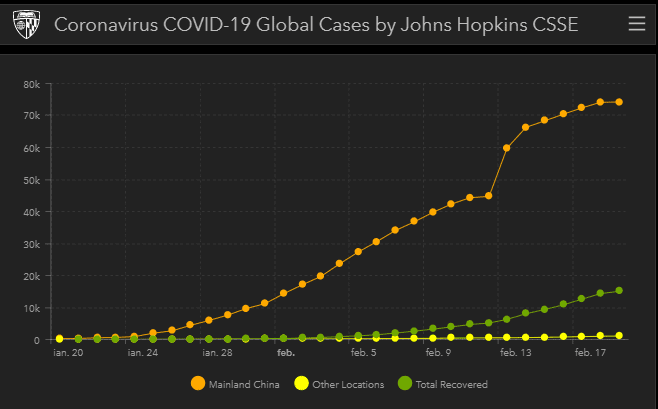 The CDC is expecting the percentage of deaths in KNOWN CASES to get as low as .7. MUCH LESS than common influenza:

These numbers will change a bit, obviously, but we can glean non-hysterical information from peeps like Dr. Drew Pinsky:

In other words, relax and do the exact same routine that influenza seasons make us do:

BACK TO MY TROUNCING:

JOHN EFFE finally stepped up and brought something to the table. He said: 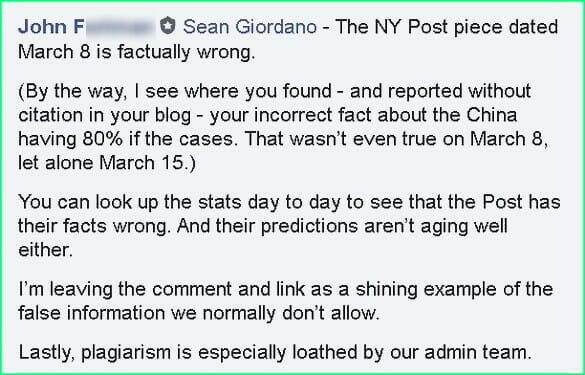 I do not know what he means by plagiarism… the site I linked was mine. But I was grateful he dug in. here is my response:

“We believe this decline is real,” WHO outbreak expert Maria Van Kerkhove said of China. The country has reported 80,270 infections and 2,981 fatalities. It has about 85% of the world’s cases and 95% of deaths from the COVID-19 illness. (SNOPES: March 4th)

“We believe this decline is real,” WHO outbreak expert Maria Van Kerkhove said of China. The country has reported 80,270 infections and 2,981 fatalities. It has about 85 percent of the world’s cases and 95 perent of deaths from the COVID-19 illness. (FIRST POST: March 4th)

Deaths spiked in Iran and Italy, which along with South Korea account for 80% of the new virus cases outside China, according to the World Health Organization. In all, more than 94,000 people have contracted the virus worldwide, with more than 3,200 deaths. (NBC BOSTON 10-NEWS: March 4th)

China has suffered the most from the virus, which is now known as COVID-19, with the country having 99 percent of the cases. (FOX: Feb 18th)

Meanwhile, the World Health Organization (WHO) on Monday warned against “blanket measures” over the coronavirus outbreak. The organisation pointed out that the epidemic outside of China was only affecting a “tiny” proportion of the population. It also said that the infection has mortality rate of around 2 %, which is less deadly than other coronaviruses such as Severe Acute Respiratory Syndrome (SARS) or Middle East Respiratory Syndrome (MERS). (HEALTH SITE: Feb 18th)

The W.H.O. thinks in the end the death rate will be .7… but since over 80% get the sniffles, it will be much less in the guessing arena

There is some hilarious irony in the strain where JOHN EFFE is merely admining his own views onto people and not representing Santa Clarita, it is that he posted a story about how many people in our Valley are infected so far: 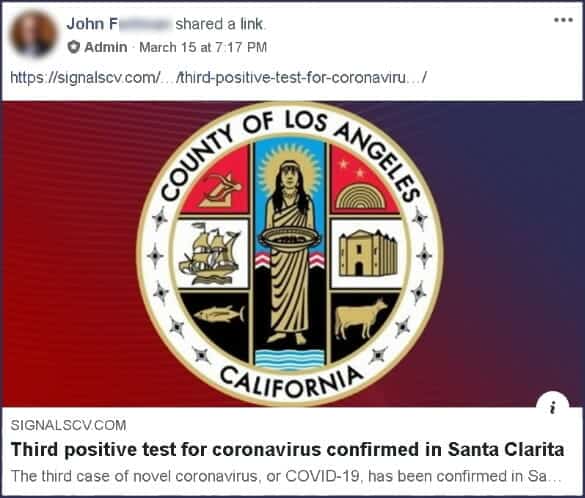 The irony is this… using JOHN EFFE’s own criteria, when a fourth person has the Wuhan Virus in our Valley, all that EFFE attributed to my link would now be applicable to his. His wanting current info, old info being corrupt somehow. His info won’t age well either. Etc. You see, typically the Left uses one standard to apply to those they just find a visceral disagreement with (for instance, he probably saw Greg Gutfeld and Ben Shapiro’s names… and without reading or watching them just said in mind: conservatives bad, like orange man bad).

As you have seen, EFFE’s biased admining is a shining example of what are Valley really deals with. Bad thinking.

RUSH: I’m always interested in people’s reaction to this program. I think I have a lot of empathy, and I think one of the reasons why the relationship you and I have is good is ’cause I know how you hear this show. That, I think, is a key ingredient. It’s called empathy. I know how you hear it.

So, when I check emails and get questions from people, usually I’m not surprised, and I’m not surprised that I got beaucoup number of questions: “Rush, you don’t sound panicked over any of this. The last two days, you don’t sound panicked, and yet everybody’s panicked. I’m panicked,” people say in their email. “I’m scared to death. I mean, I’ve looked, the stock market was pulling up to 30,000. Now it’s down to 21,000. The Democrat Party, every move they’re making is designed to grow government, make government bigger, and you don’t seem alarmed.”

Folks, panic is… I don’t know. I’m not panicked. I am ticked off like you cannot believe, and I am really having a conversation with myself about how far to go in explaining why I’m mad, ’cause I’m mad about the politics of this. For example, let me give you some statistics. How many of you even remember the swine flu 2009, 2010? I don’t remember it. I mean, I remember we had it. But I don’t remember any panic about it. I don’t remember a thing about the swine flu.

I went back and looked at the stats and I was stunned. Are you ready for this? The swine flu outbreak in this country in 2009 and 2010, 60 million Americans were infected. Do you remember that? Sixty million were infected. Dr. Siegel, one of the Fox doctors was on TV explaining this last night. He was not my primary source for it, but he ended up confirming it. Sixty million people were infected. 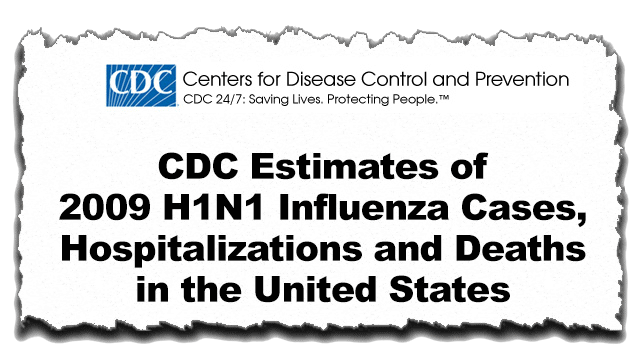 There wasn’t any media panic. The Republican Party did not politicize it at all. They made not one single effort that anybody can find or remember to try to make political hay out of it. It was treated as a health issue from top to bottom. Sixty million Americans infected, 300,000 hospitalized. I don’t know what the death toll was. The numbers with the coronavirus are not even close. They are barely a fraction of a percentage compared to the swine flu.

And then we also had Ebola. And I do remember a little bit more about Ebola, and once again, the Drive-By Media was praising the skills and the composure and the brilliance of Barack Obama in dealing with it. And I remember being kind of ticked off about that because there wasn’t anything anybody can do about Ebola. Ebola is like any of these other viruses. There’s nothing we can do to contain them.

See, the reason I’m not panicked is I don’t have enough emotion left for panic ’cause I’m too mad. I’m too ticked off at this. We’re watching the U.S. economy be wrecked here. There’s some people enjoying it. And it makes me mad. There’s some people’s lives here that are being seriously damaged over this. And you know what’s gonna happen? It’s gonna end. We are going to overcome it. It’s going to fizzle out like all of these do.

How did we ever survive 60 million infected with the swine flu? But we did to the point that hardly anybody remembers it. And that’s just 10 years ago, 300,000 hospitalized. So we overcame it. We overcame Ebola. This is gonna end, it’s gonna pass. And I’ll tell you what else is gonna happen. Because of the actions President Trump has taken, like this travel ban from Europe, that has really put the Democrats in a dicey position.

There’s some real positives if you want to find ’em here, and I, of course, have, and I’ll share them with you in a minute. The point is we’re gonna rebound from this, and when we do, you had better get ready and hold on tight, because this market’s gonna rebound. The people who are selling right now and getting out of it are panicking, and they don’t want to be selling. Everybody’s doing this from a very defensive posture and point of view…. 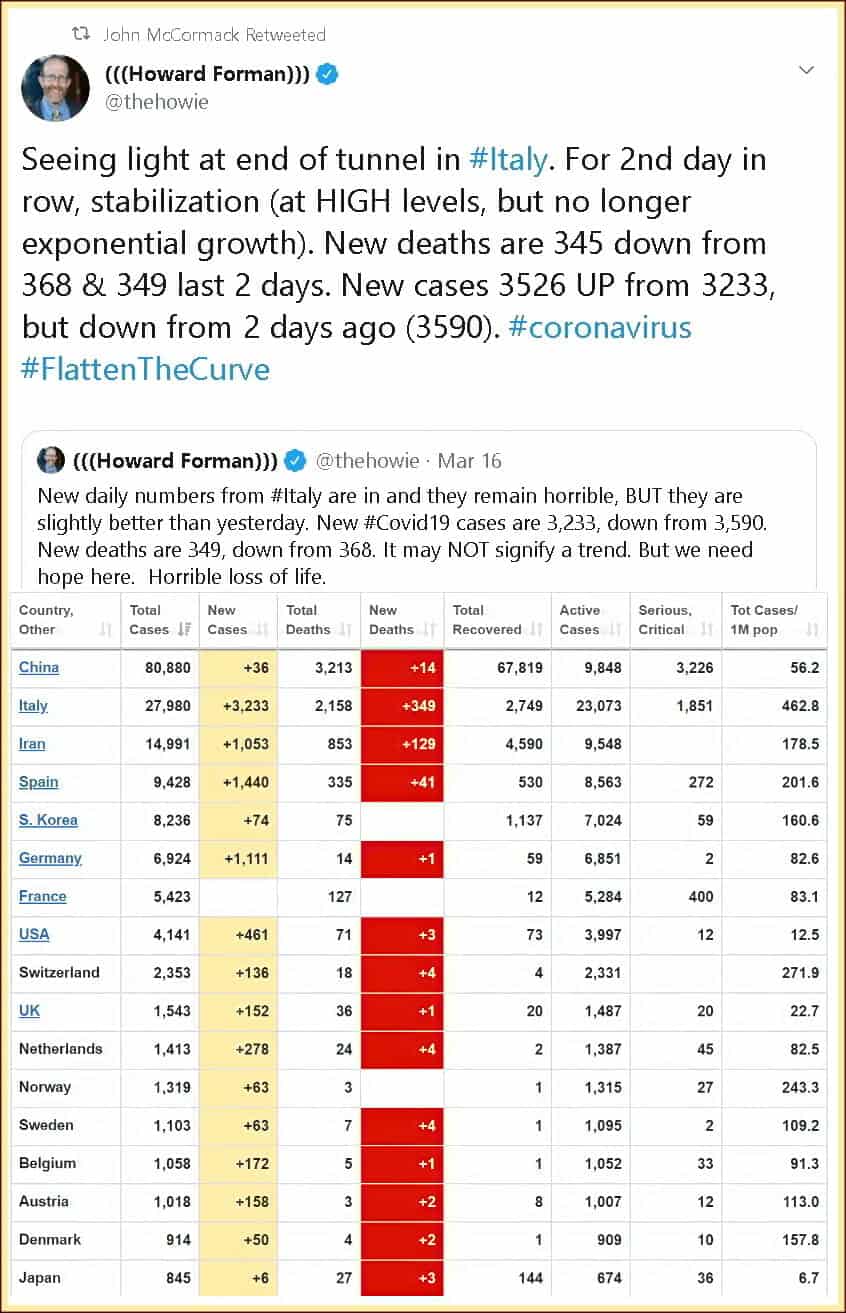