Tony’s point is that if you take that number (42,918) and essentially half it, the election would have gone to Trump. There was easily that many votes that should have been rejected due to fraudulent ballots.

I combine a couple segments of Larry Elder showing that to say this election was close and maybe it was so close that small court cases would have changed the outcome. Which is why I include Rand Paul mentioning the crazy amount of mail-in-ballots with only a name and no address. Wow! That alone would have almost turn Wisconsin red….

….Kornacki noted that last month’s election of Joe Biden over President Trump could have easily gone the other way, despite a 7 million vote margin for the Democratic ticket.

“If you flipped about 20,000 votes in Wisconsin, about 13,000 in Georgia and 10,000 in Arizona, that’s just over 40,000 votes collectively,” said Kornacki. “In those three states, the electoral vote count would have been 269 to 269 and it would have gone to the House of Representatives. Republicans would have been able to elect Trump.

“The way that I look at this election is, Donald Trump came within about 43,000 votes of getting re-elected. We came very close to one of the biggest disconnects we’ve ever seen in terms of the popular vote and the Electoral College,” he said….

I mentioned the following in a conversation with a friend, and he asked a question which I will respond to here. Enjoy. I said:

So, here are a few articles that build a related case that Senator Paul mentioned in the video above. First up is the earlier April election. Wisconsin Public Radio notes an issue that would have had consequences if the [illegal] change in laws hadn’t of happened before the November 4th election.

To wit, some counties changed ballots in 2020 to try and make them legal, but as retired Wisconsin Supreme Court Justice Michael Gableman (who worked as a poll watcher in Milwaukee on Election Day), “The statute is very, very clear. If an absentee ballot does not have a witness address on it, it’s not valid. That ballot is not valid” (RED STATE).

Before going on to my next point — I want to drive home the issue made by the Public Radio in another article via REVEAL.

…But an analysis of voter data from the April primary in the swing state of Wisconsin shows that mail-in voting may pose the opposite risk – rejected ballots. Slightly more than 23,000 ballots were thrown out in the primary, according to an analysis by APM Reports, mostly because those voters or their witnesses missed at least one line on a form.

That figure is nearly equivalent to Trump’s 2016 margin of victory in Wisconsin of 22,748 votes. And with Wisconsin voter turnout expected to double from April to more than 3 million in November, a proportionate volume of ballot rejections could be the difference in who wins the swing state and possibly the presidency…..

Taken together, the analysis serves as a case study of what may lie ahead for a presidential battleground state overwhelmed by applications and without the experience or systems to cope. Other battleground states such as Georgia and Pennsylvania saw increased by-mail voting in their primaries, as well as problems managing an increase in absentee ballots.

In the 2016 and 2018 Wisconsin general elections, by-mail absentee ballots made up no more than 6% of all ballots counted. In April, the portion jumped to more than 60%, the result of Gov. Tony Evers’ stay-at-home order because of the pandemic.

And while state officials stress the percentage of rejected ballots in the April primary is consistent with rejection rates in past elections, it’s little comfort to voters who learned that their ballots were rejected months after they thought their votes were counted.

More importantly, while the rate may be similar, raw numbers will make the difference when it comes to winning or losing an election. 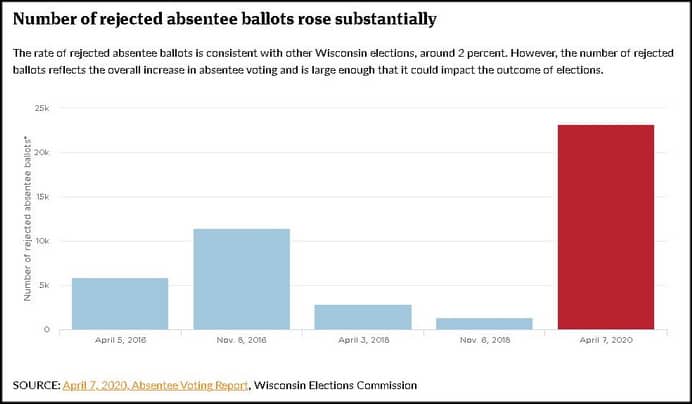 One of the main issue I see is the equal protection of voters. There were not clerks fixing all the ballots evenly. It seems that this happened in more inner-city areas and not in the more conservative suburbs. RED STATE notes the last minute change to laws that also allowed more opportunity for fraud and ballots that have not been counted in the past.

…In Wisconsin, a federal judge extended the deadline for receiving absentee ballots during the primary election cycle by a period of six days.  No one objected to that extension in the early days of state “lockdown” orders to address the outbreak of the COVID 19 virus.  But, five days before the scheduled election, the same judge clarified the order to state that ballots postmarked on or before the extended day for receipt of ballots could be counted even though that violated Wisconsin election law which required that they be postmarked no later than Election Day, and no party in the case had asked for the Court to grant the additional relief.  The Supreme Court reversed that provision of the district court’s order, writing as follows:

Nonetheless, five days before the scheduled election, the District Court unilaterally ordered that absentee ballots mailed and postmarked after election day, April 7, still be counted so long as they are received by April 13. Extending the date by which ballots may be cast by voters—not just received by the municipal clerks but cast by voters— for an additional six days after the scheduled election day fundamentally alters the nature of the election…  This Court has repeatedly emphasized that lower federal courts should ordinarily not alter the election rules on the eve of an election….  The District Court on its own ordered yet an additional extension, which would allow voters to mail their ballots after election day, which is extraordinary relief and would fundamentally alter the nature of the election by allowing voting for six additional days after the election.

The four liberals on the Court, including the late Justice Ginsburg, dissented from this order and would have allowed votes to be cast and counted after the deadline imposed by state law in Wisconsin, basing their judgment on the complications of the COVID 19 pandemic.  So, you can see where the lower court judges are finding their “justification for rewriting election rules more to the liking of plaintiffs who — in every case I’ve looked at — are Democrat party interest groups….

The WASHINGTON POST agrees with the above by pointing out that [in the April election in Wisconsin] “more than 30,000 votes arrived after voting day in 11 cities where that information was available, more than 10 percent of all votes cast in those cities. In Brookfield, a western suburb of Milwaukee in conservative Waukesha County, the figure was closer to 15 percent.”

So Wisconsin changed laws on the fly (against their state’s normal [legal] constitutional process), or improperly applied others.

As JUST THE NEWS noted, an order from the election commission (passed in 2016) that went out in this election “permits local county election clerks to cure spoiled ballots by filling in missing addresses for witnesses even though state law invalidates any ballot without a witness address.”

This is part of the reason that 3-of-the-4 justices in Wisconsin’s Supreme Court wanted to see the evidence, the three dissenting conservative justices, led by Chief Justice Patience Roggensack, said the court should have decided whether votes should have counted in each of the four categories, and clarified the law for future elections.

Because of the ruling, procedural wrongs:

The liberal justices went on to say there was no evidence of fraud.

This is a red herring.

The above are not about fraud at all, but the invalidation of ballots because voters ballots were treated differently across the state, and, failure to follow the new regulation for voting from home by Wisconsin officials.

“Fraud,” it just sounds good and the press runs with the same narrative.