What many Democrats seem to forget is that the reason for Big Business to join forces with Big Government, is to run any threat of competitiveness out of the market. To MONOPOLIZE. Obama’s policies are proving that these Big Businesses are not altruistic in their reasoning for pursuing such causes like Obama-Care and raising of taxes and more regulatory conditions. From over Obama-Care 2,000 waivers, to the stories below, Obama’s policies are filling the rolls of LARGE insurance carriers and forcing small companies who cannot compete with large “Warren Buffett” type firms to move many of their full-time workers to part time. FAILED policies.

What is funny — to give one more example — a family member of one of the Gay Patriots told him he was voting for Obama because he thought Republicans wanted to cut Pell Grants. Sorry Charlie:

Sorry, college students. President Obama has cut your access to Pell Grants by 33%; he just forgot to mention it before Election Day. During the recent campaign, President Obama claimed credit for increasing funding to the Pell Grant program, which provides college funds, free from repayment, to millions of students.

This cut in eligibility was never mentioned by President Obama during the campaign, and when he boasted about increasing funding to the Pell Grant program, CNN fact-checked his claim as true. While the amount of government funding to the program is going up in future years, CNN failed miserably by not pointing out the cuts in eligibility to students. The cuts could be a rude awakening to students who thought President Obama was expanding their educational opportunities.

Hollywood is another example of this hypocrisy of avoidance, proving, yes PROVING, the Republican position. Hollywood and most in it campaign for higher taxes. But what is wrong with this is that after these taxes hit, they leave California to shoot movies in other states with lower tax-rates. Here Adam Corolla and Dennis Prager talk about this:

Another example of what Democrats voted for, unlike Bill Clinton who, yes, raised taxes but REFORMED social programs and CUT spending at the time. Obama is offering another stimulus (more government spending) that is about equal to any forecast gain in tax increases/revenue — the exact opposite of Clinton!

Like medical giant, Stryker, one of Obama’s biggest financial backers, laying off almost 1,200 workers to prep for Obama-Care, and the falling revenue (33%) of the Californian government showing in the the micro what higher taxes and more regulation does to the engine of the economy. Here are more stories of failure, and how these higher taxes will hit the retired folks that worked hard their whole lives, just to see it disappear. Google and Microsoft are two of Obama’s largest financial backers (Bloomberg):

The company avoided about $2 billion in worldwide income taxes in 2011 by shifting $9.8 billion in revenue into a Bermuda shell company, almost double the total from three years before, filings show.

Governments in France, the U.K., Italy and Australia are probing Google’s tax avoidance as they seek to boost revenue. Schmidt said the company’s efforts around taxes are legal.

We pay lots of taxes; we pay them in the legally prescribed ways,” he said. “I am very proud of the structure that we set up. We did it based on the incentives that the governments offered us to operate.”

The company isn’t about to turn down big savings in taxes, he said.

“It’s called capitalism,” he said. “We are proudly capitalistic. I’m not confused about this.”

Google’s overall effective tax rate dropped to 21 percent last year from about 28 percent in 2008. That compares with the average combined U.S. and state statutory rate of about 39 percent.

Costco also was a huge supported of Obama and is borrowing money to avoid paying higher taxes on it now (WSJ):

When President Obama needed a business executive to come to his campaign defense, Jim Sinegal was there. The Costco COST +1.92% co-founder, director and former CEO even made a prime-time speech at the Democratic Party convention in Charlotte. So what a surprise this week to see that Mr. Sinegal and the rest of the Costco board voted to give themselves a special dividend to avoid Mr. Obama’s looming tax increase. Is this what the President means by “tax fairness”?

Specifically, the giant retailer announced Wednesday that the company will pay a special dividend of $7 a share this month. That’s a $3 billion Christmas gift for shareholders that will let them be taxed at the current dividend rate of 15%, rather than next year’s rate of up to 43.4%—an increase to 39.6% as the Bush-era rates expire plus another 3.8% from the new ObamaCare surcharge.

More striking is that Costco also announced that it will borrow $3.5 billion to finance the special payout. Dividends are typically paid out of earnings, either current or accumulated. But so eager are the Costco executives to get out ahead of the tax man that they’re taking on debt to do so.

To sum up: Here we have people at the very top of the top 1% who preach about tax fairness voting to write themselves a huge dividend check to avoid the Obama tax increase they claim it is a public service to impose on middle-class Americans who work for 30 years and finally make $250,000 for a brief window in time.

If they had any shame, they’d send their entire windfall to the Treasury.

Other companies as well that bundled, supported money (and press time to) Obama are doing the same (Townhall):

One of the people who will benefit from this deal will be Costco’s co-founder and former CEO Jim Sinegal who owns more than two million shares of its stock and will collect about $14.4 million from the special dividend. Had he taken that next year, he could be slapped with a tax rate of 43.4 percent if Obama’s proposed tax increases become law (boosting the tax rate on dividends to over 20 percent and adding a surcharge tax on millionaires).

Instead, Costco decided to pay its stockholders before Dec. 18 so that the special payoff plus a regular quarterly cash dividend of 27.5 cents will be taxed at the current 15 percent rate under the investment tax cuts wisely enacted under President George W. Bush in 2003.

This means Sinegal, who gave a prime-time speech in behalf of Obama’s re-election at this summer’s Democratic national convention, would avoid paying about $4 million in higher taxes next year.

Costco is not alone in its early tax-avoidance payouts. Many American businesses, from Wynn Resorts to Tyson Foods, have also declared special dividends to avoid the higher tax rate if the Bush rates expire.

One of the most notable Fortune 500 companies to join the pack is the Washington Post who endorsed Obama for a second term and has warmly embraced his tax increase plans. The media conglomerate has announced it will pay its 2013 dividends “before the end of this year to try to spare investors from anticipated tax increases,” reports the Associated Press.

Among those who stand to benefit from the Post’s beat-the-tax-deadline — and pocket a bundle of money — will be stock tycoon Warren Buffet and his Berkshire Hathaway firm, the newspaper’s biggest shareholder.

How can governments stop people from doing this, besides the right thing and lowering taxes to increase the amount of businesses staying in our country and wanting to move their operations here? Why, enforce the law with threat of prison and fines! Here is an example from France, whom, you’ll remember, raised the top rate to 75%, here is a story from Libertarian Republican (“stopped at the border… ‘papers please'”):

The President of France, François Hollande, announced today the possibility of reviewing the existing tax treaties with Belgium to prevent welthy people from moving to the neighboring country in order to evade taxes. One of the most recent cases was that of the famous actor Gerard Depardieu, who decided to set his house in the Belgian town of Néchin, where other wealthy French citizens live in order to benefit from a more lenient tax regime. “Everyone should have and ethical behavior, regardless of his job,” Hollande told reporters. The tax exile of the highest paid actor in France was described as a lack of patriotism, especially since he always boasted of its popular origins and occasionally denounced social inequities.

What other option is there? If you are Big Government that is!

1) On a dark street, a man draws a knife and demands my money for drugs;

2) Instead of demanding my money for drugs, he demands it for the Church;

3) Instead of being alone, he is with a bishop of the Church who acts as the bagman;

4) Instead of drawing a knife, he produces a policeman who says I must do as he says;

5) Instead of meeting me on the street, he mails me his demand as an official agent of the government.

If the first is theft, it is difficult to see why the other four are not also theft.

NewsBusters has this jaw-dropping hypocrisy. 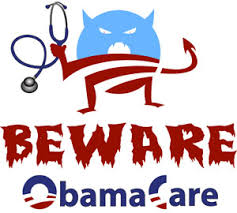 As NewsBusters previously noted, there were 204 ObamaCare waivers issued in April, and almost 20 percent of them went to establishments in former House Speaker Nancy Pelosi’s (D-Calif.) San Francisco district.

Pelosi’s district secured almost 20 percent of the latest issuance of waivers nationwide, and the companies that won them didn’t have much in common with companies throughout the rest of the country that have received Obamacare waivers.

Other common waiver recipients were labor union chapters, large corporations, financial firms and local governments. But Pelosi’s district’s waivers are the first major examples of luxurious, gourmet restaurants and hotels getting a year-long pass from Obamacare.

Boyle noted a number of the establishments getting these waivers are very high-priced eateries in Pelosi’s district, many of which as a Bay Area resident I can attest to being some of the finest in the nation. 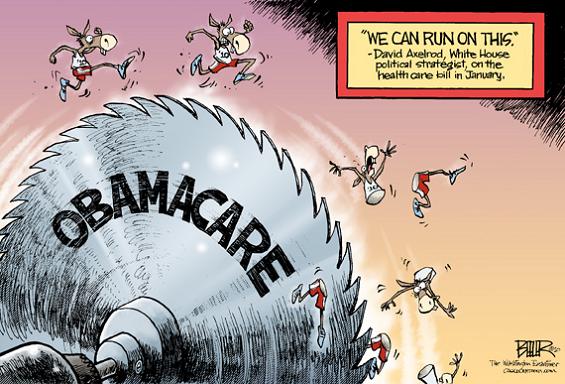 Another sad story of defeat in regards to the Obamacare “health” law that our great Democratic Congress has graced us with. You will hear little about this topic in the mainstream media as it refutes an icon of the Left [by the Left I might add]. One of the laws staunchest defenders, Anthony Weiner, also asked for a waiver from the health law for NY:

This latest news from Gateway Pundit:

The Obama Administration has now granted over 1,000 health care waivers. Of the 129 latest waivers more than half went to unions.
Jamie Durpree at the AJC reported:

The Obama Administration has rolled out another 129 waivers to one provision of the new health reform law, with almost half of those new exemptions going to various union groups.

The extra waivers bring the total to 1,168, giving businesses, health plans, unions and others an exemption from a portion of the law that in 2011 requires an annual benefit limit of no less than $750,000.

In other words, these 1,168 waivers allow companies to limit health insurance payouts to less than $750,000 – those annual benefit limits will be phased out by 2014.

The waivers now cover almost three million Americans, but the feds argue that is “less than 2 percent of all Americans who have private health insurance.

Almost half of the new round of waivers were given to union health benefit programs, a fact that is sure spur new complaints from health law critics in the Congress, who see these waivers as evidence that the Obama health plan is flawed.

Among the unions that were recently approved for waivers:

Karl Rove previously reported that a disproportionate number of waivers, nearly one-third, were being granted to union workers even though unionized workers make up only 7% of the private work force.