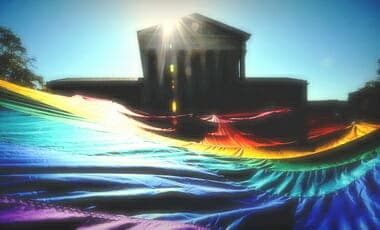 Albert Mohler discusses the Court’s decision and the change in the meaning of the word “sex” in 1964. This decision will wreak havoc on many streams of society, as Daniel Horowitz’s article notes well.

Daniel Horowitz’s article at CONSERVATIVE REVIEW is a well written warning to the road ahead:

….Thanks to Justice Gorsuch’s contorted reading of the word “sex” in anti-discrimination law, you now have a right to sue for protection for biological traits you do not possess. This means that legitimate rights of others will now have to yield. Anyone who can’t see the devastating real-world effects of this decision – well beyond firing someone simply because you hate their private behavior – is clearly not paying attention.

Codifying into anti-discrimination law the concept that a man who says he is a woman must be treated according to his mental illness is not something we can live with as a society. Gorsuch might want to dismiss the earth-shattering ramifications of his opinion, but he knows well that there are already pending lawsuits to demand that men be treated as women, in very dangerous or disruptive ways that go well beyond trying to use the boot of government to stamp out mean or discriminatory behavior.

Here is an outline of some of the most immediate threats from this decision. These are not hypothetical societal and legal problems; these issues are in contention as we speak and have now been decided by this court.

Forcing employers to retain gay employees and not fire them simply because of their private behavior sounds very innocuous and even laudatory. But what about forcing doctors to perform “sex change” operations and forcing states to fund them? Codifying the desires of someone afflicted with gender dysphoria into sex-based anti-discrimination law will force states and hospitals to treat anyone who believes they are really the opposite gender as that preferred gender.

In fact, the Supreme Court has already tacitly mandated this. In May, justices declined to take Idaho’s appeal from the Ninth Circuit, where the lower court ordered the state to pay for a castration surgery for a male serving time in Idaho prison for sexually abusing a 15-year-old boy.

Similarly, a federal judge in Wisconsin mandated that the Badger State use its Medicaid funding to pay for “gender confirmation” mutilations, which can include castration, mastectomies, hysterectomies, genital reconstruction, and breast augmentation.

Those radical decisions will now be backed up in all circuits. There are already numerous lawsuits suing employers to provide castration and hormone procedures under the employer health insurance mandate of Obamacare. Obamacare uses civil rights laws to bar discrimination in offering health care coverage. It would be easy for the courts to now apply Gorsuch’s interpretation of Title VII to other areas of discrimination in the ACA statute.

Will Gorsuch be there for us to overturn those decisions?

We were told not to worry about Obergefell creating a right to gay marriage because it was merely an issue of a marriage certificate and would never affect private religious institutions. Well, what happens now if a cross-dresser or a prominent homosexual activist wants to teach in a Catholic, Orthodox Jewish, or Muslim school? The majority opinion blithely denied these concerns and noted how title VII protects religious liberty by offering some long-standing exceptions. However, those exceptions have been interpreted more and more narrowly as time goes on. The same way Gorsuch has evolved on the definition of a sex, the courts are evolving on religious protections, and the former will now accelerate the latter.

As Justice Alito warned in his dissent, the New York City government has already made it a criminal offense not to address someone by his or her preferred pronoun.

“After today’s decision, plaintiffs may claim that the failure to use their preferred pronoun violates one of the federal laws prohibiting sex discrimination,” wrote Alito.

Supporters of this decision claim that because the court did not create a constitutional right, merely a retroactive reinterpretation of statue, Congress is still free to legislate. But who are we kidding here? The Civil Rights Act is as politically untouchable as the Fourteenth Amendment, and there is no way Congress will have the guts to deal with this fallout. State legislatures will be cut out from the process entirely.

Also, as Alito warns, the jump from codifying transgenderism into statute to into the Constitution is nothing more than a hiccup for its supporters to overcome, and the court has consistently done that in the past. There are already numerous cases percolating in the lower courts to do just that. Once the lower courts codify a new right, we have seen the Supreme Court first ignore the lower court radicalization and then downright legitimize it.

Yesterday, Mitch McConnell didn’t even mention this travesty in his press briefing. Trump bizarrely commented, “they ruled and we live with their decision” and called it a “very powerful decision.” [to which Mohler dealt with]…..

NATIONAL REVIEW opines well regarding the “knowledge” of Neil Gorsuch by stating wryly after their intro, “Nobody knows. Except maybe Neil Gorsuch.”

…If some conservative critic had said in 1964 that the civil-rights bill then under consideration would outlaw discrimination against men who wish to undergo voluntary genital amputation in service of a persistent fantasy that they are in some transcendent sense female, Lyndon Johnson would have looked at him a little funny. Even Barry Goldwater did not think such a thing. There is not a word about sexuality, homosexuality, or the contemporary phenomenon politely known as transgenderism in the Civil Rights Act of 1964.

The law does forbid discrimination based on “sex.” From that modest material, a Supreme Court majority, led by Justice Gorsuch, has constructed a vast new edifice of civil-rights law under which a man’s desire to wear a dress (I am not being snarky — the issue in R.G. & G.R. Harris Funeral Homes, Inc. v. EEOC was an employer’s maintenance of separate dress codes for male and female employees) is protected by the same law, to the same extent, and under the same principles as African Americans seeking to maintain their political and economic rights after centuries of chattel slavery and ruthless official repression.

Justice Gorsuch’s reasoning is, of course, impeccable: If you wouldn’t fire a woman for wearing a dress, you can’t fire . . . well, wait: The transgender ideology insists that a biologically male individual who identifies as a woman is female in the same sense your mother is, so it cannot be that sex is genuinely the issue — the issue is that one of the ladies in the office is being treated differently from the others. Justice Gorsuch squares this all with a nice dose of hocus-doofus: You wouldn’t be homosexual if you weren’t the same sex as the people to whom you are sexually attracted, ergo discrimination against homosexuals is discrimination on the basis of sex. In parallel: If you really weren’t a member of the sex you say you are not a member of, you wouldn’t be transgender, ergo sexual discrimination, QED.

And he has a point. His reading of the text is entirely sophomoric, but it is in its daft way literal and, if you are willing to be persuaded, persuasive. There is that niggling question of democratic legitimacy: Nobody who voted for the Civil Rights Act of 1964 thought he was voting for a bill to equate the situation of transgender people, of whom no one had heard of then since the word had not yet found its way into English, with the situation of African-American people, and to place the whole mess under rigorous federal monitoring. Nobody who voted for the 1964 bill was voting for that, and none of the people who voted for those representatives thought he was voting for such a thing, either. It is a law that nobody agreed to, but, if we are to credit Justice Gorsuch et al., the plain fact of it has been sitting there, awaiting discovery, since Gorsuch was toddling around his kindergarten in Denver.

This is not jurisprudence. This is magical thinking.….

The NEW YORK POST has an excellent post regarding the issue as well — bravo for them — in the article they note that “This isn’t textualism. It’s ivory-tower liberalism.” Yep:

….In Bostock v. Clayton County, the majority informed us that the interpretation of Title VII of the 1964 Civil Rights Act, held unchallenged between its enactment and the year 2017, was, in fact, erroneous. The statute’s prohibition against employment discrimination on the basis of sex, Gorsuch told us, extends to “sexual orientation” and “gender identity.”

In Bostock v. Clayton County, the majority informed us that the interpretation of Title VII of the 1964 Civil Rights Act, held unchallenged between its enactment and the year 2017, was, in fact, erroneous. The statute’s prohibition against employment discrimination on the basis of sex, Gorsuch told us, extends to “sexual orientation” and “gender identity.”

The tangible results will be harrowing. Following Bostock, can a Catholic school deny employment to a teacher whose sexual lifestyle blatantly flouts millennia of Catholic moral teaching? Can an Orthodox Jewish day school refuse to hire a male teacher who self-identifies as a woman, contravening traditional teaching rooted in Genesis?

Speaker Nancy Pelosi tried to enact much of this agenda legislatively in 2019 with the so-called Equality Act — and failed. All it took was a Republican justice to impose it ­nationwide via judicial fiat.

Religious employers’ conscience rights aside, long-settled employment law has now been thrown into chaos. The court concedes that such issues as sex-specific bathrooms, locker rooms and sports teams will be on the chopping block in future litigation. As my former boss, Judge James C. Ho of the Fifth Circuit, noted in a similar case last year, the underlying legal issues ­“affect every American who uses the restroom at any restaurant, buys clothes at any department store or exercises at any gym.”

The substitution of subjective gender identity for embodied sex particularly threatens biological women, whose rights Congress specifically set out to protect with the 1964 act. The entire edifice of American anti-discrimination law, after all, rests on the principle that the bodily differences between men and women — in athletic competition, in private or sensitive spaces — mean something. Can that edifice survive if its cornerstone is ­removed? I don’t see how.

Bostock is no joke, and it lays bare the moral and intellectual bankruptcy of the conservative legal movement.

Generations of right-leaning law students have now been taught that the only proper way to interpret law is to obsess over the text while eschewing the thorny moral questions raised by cases. But as Bostock shows, even a conservative, “textualist” jurist can massage a text enough to divine a new meaning that simply wasn’t there when Congress framed a law like the 1964 act. Meanwhile, a more authentic textualist like Alito can reach the ­opposite conclusion.

The result is that the legal left makes loud arguments about justice and the good, by its lights, and triumphs, while the legal right mutters about textualism…..