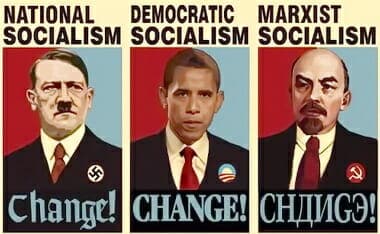 (In separate posts I discuss cults from the black community that likewise vote typically Democrat):

Jump to other pages:

“The goal of socialism is communism.” ~ Vladimir Lenin

I want to build on an idea via the following short post over at Gay Patriot (as well as Moonbattery):

The Communist Party of the USA has announced that it will throw its support to the Democrat Party in future elections.

One of the leading Democrat candidates for president is an open socialist; and another is a not-quite-closeted-socialist.

The Democrat Mayor of New York City spent his college breaks helping the Communist Regime in Nicaragua, and honeymooned in Communist Cuba.

Let’s just stop pretending the Democrat Party isn’t what it denies being.

I was challenged with how many actual members there are of Communist Party members. Great question!

So I pointed out the numbers do not matter, the ideology does.

From the early ruminations of the Woodrow Wilson types, to the New Left (see here also) of the 60’s radicals, to a President who had close affiliations to Marxist thinkers and the radical left. ALSO, Obama went to a church that taught radical “liberation theology” which seeks to interpret the Christian call for justice in a way that is in harmony with this Marxist dictum.

It is this ideology rather than numbers that causes Moonbat to note: “The days of anticommunist Democrats like JFK and Scoop Jackson are a fading memory now.” While I believe the Democrats have had a very sordid history, in the least they use to fight foreign threats/ideology, well. Now they cannot bring themselves to call the Taliban a terrorist organization.

All this aside, let us take a look at the numbers of a few radical left parties. First up, the Democratic Socialists of America (DSA). They have about 10,000 persons in their membership. While this seems small, let’s look at their influence on members in Congress, shall we (note, these stats are somewhat dated [111th Congress], but the importance of their impact still stands):

Q: How many of the DSA members sit on the Judiciary Committee?

Q: Who are these members of Congress?

Here’s my list of 50 of the most obvious socialists in the House, with links to my website Keywiki for the backup evidence. Apologies to the many I’ve omitted. Please email me at trevor.newzeal @gmail.com if you’d like to be included in future lists.

So… while the DSA has only 10,000 members, officially, the impact and membership is wider than that.

Now, let us look at the Communist Party USA. Keep in mind they have voted for quite some time a straight Democratic ticket… only now have they officially announced the policy to continue on this path:

So how many members does the Communist Party USA (CPUSA) have? Two-thousand. Again, the numbers do not matter, it is that the very root of communism and “democratic” socialists ~ their ideology (the CPUSA as well as the DSA) ~ are anathema to our founding ideals and documents.

You may think this is the end of my rant. However… you would be wrong. Because there is another radical group that has historically been Democratic and still to this day vote predominately for Democrats. You must be wondering who?

I will tell you.

BTW, other racial hate groups that vote Democratic are “the Nation of Islam,” and the “Five-Percenters,” to name a few.

WHAT! (*You think to yourself*) Let me explain. … but first, some numbers:

All the way up to the 1970’s the Klan was exclusively Democratic: 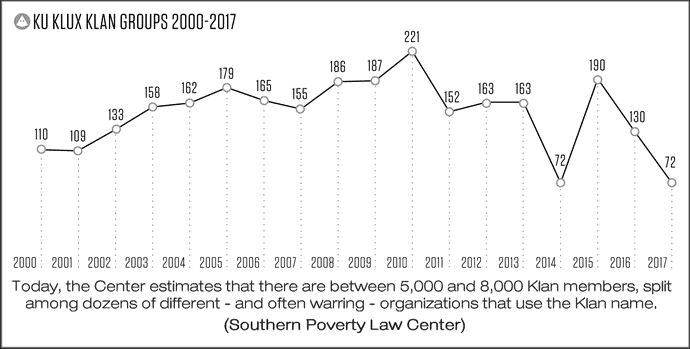 And the switch of “Dixiecrats” to Republicans is a myth. There were a couple dozen Dixiecrats and all but one remained Democrats until they retired or were voted out. But that aside, how many of the Klan members voted for a black President? Obviously there isn’t a scientific polling of this, so we rely on polling by smaller oraganizations or magazines that are interested in the topic. Here is one such article from Esquire Magazine:

How do racist anti-Semites view America’s first black president? Not necessarily the way you think they would…. In an informal Esquire survey, three out of four [literally] white supremacists prefer Obama.

Mind you, these are 3-out-of-4 MAIN leaders in the KKK [supremacist groups] in some form.

Here is some more via Zo-Nation:

Also note Duke’s hatred toward conservative media via the Examiner:

“I cheer the men and women on the streets condemning the international banks that hold America financially hostage. These Wall Street banks are not the product of free enterprise; they are the product of crime,” Duke said in a video supporting the protests.

CNS News reports that Duke “repeatedly attacks what he refers to as “Zionist bankers” such as Ben “Shalom” Bernanke,” and claims that while many have lost up to half of their savings, the “Zionist owners of the predatory banks made more shekels.”

Duke also decries what he calls the “Zionist media and their paid whores,” and attacks Rush Limbaugh, Sean Hannity and Bill O’Reilly….

I could go on, but you get the point: as the Democrats move further left in their welfare programs which keep minorities in poverty and increase in their hatred towards the Jewish State. Klan members who by-and-large already vote Democratic will increase towards this proclivity.