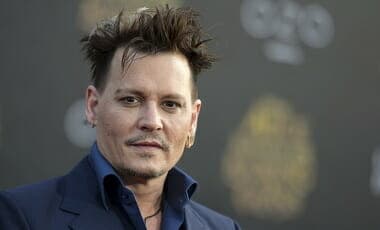 See a previous post regarding a deeper look at the issue, HERE. BTW, he looks like the creepy old man from Poltergeist.

“Maybe wait a few months past the last time someone on your team tried to assassinate a congressman before calling for ‘all-out war,’ ” National Review’s Kevin Williamson responded, The Blaze reported.

INVESTORS BUSINESS DAILY shows why the political landscape will be anything but civil:

For a brief moment after Rep. Steve Scalise was nearly killed by a crazed Bernie Sanders supporter, some prominent liberals uttered a few words about “toning down the rhetoric.” If that pledge was sincere at all, it barely lasted a week.

Actor JOHNNY DEPP took the prize last week, when at a film festival in England he asked, “Can we bring Trump here,” and followed that by asking “When was the last time an actor assassinated a president?” The audience roared with cheers and laughter.

Depp later “apologized,” saying it was a “bad joke” that “did not come out as intended.”

But Depp was hardly the only one to go back to using extreme, violent, incendiary rhetoric to talk about Republicans.

Earlier in the week, the head of the Nebraska Democrats. Jane Kleeb, ousted a party official after he was caught on tape wishing Scalise had died.

“Well then what are you saying it to us for?” someone else in the recording asks.

“I wish he was (expletive) dead,” Montag replies.

In Ohio, police arrested 68-year-old E. STANLEY HOFF after he left a voice mail for Rep. Steve Stivers saying that “We’re coming to get every goddamn one of you and your families. Maybe the next one taken down will be your daughter. Huh? Or your wife. Or even you.”

JOSEPH LYNN PICKETT of Illinois was charged with threatening Trump on Facebook, after posting that “the secret service now has a heads up as to my plan to assassinate Trump … let’s see if they act.”

The left’s reaction to the relatively modest Senate health reform bill made it abundantly clear that their rhetoric continues to be unhinged.

JOSH FOX, the director of the documentary about fracking — “Gasland” — sent a tweet in which he called Mitch McConnell and President Trump terrorists and proclaimed that the Senate health reform bill “sentences poor people to death.”

Harvard professor DAVID CUTLER tweeted that “GOP congress may never again get a chance to kill so many people. Could rival the Iraq War in its total.”

Sanders later deleted his tweet, but Warren’s is still there.

And BARACK OBAMA, in a Facebook post in which he starts by saying how we need “to listen to Americans with whom we disagree,” couldn’t resists the urge to decry the “fundamental meanness” of the Senate bill.

All of this reads like an open invitation to commit actual acts of violence against Republicans…..