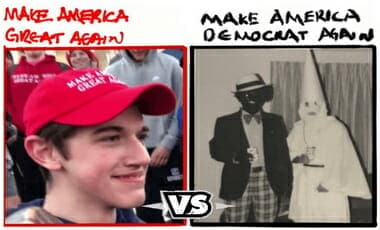 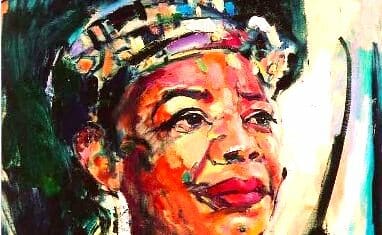 The problem with the above video is that the idea leftist have of “love” are never born out in their lives. It is used, rather, as a cover for their more radical ideals, which in thew twentieth century have been the bloodiest in all of history.

Gateway Pundit notes that “Angelou was a talented poet. She also was a hardened leftist who supported killers Fidel Castro and Mumia Abu-Jamal.” Here is more via Discover the Networks:

…In the early 1960s, Angelou championed Fidel Castro‘s rise to power in Cuba. Her first published story appeared in the Cuban periodicalRevolucion. In September 1960, she was deeply moved by the sight of Castro’s exhuberantly warm public embrace of Soviet Premier Nikita Khrushchev in New York, where both men were attending a United Nations session. “The Russians were O.K.,” Angelou laterreminisced. “Of course, Castro never had called himself white, so he was O.K. from the git. Anyhow … as black people often said, ‘Wasn’t no Communist country that put my grandpappa in slavery. Wasn’t no Communist lynched my poppa or raped my mamma.’”Also in the early Sixties, Angelou supported the anti-South African apartheid movement and worked as a journalist and editor in Egypt and Ghana.During the ensuing decades, Angelou gained enormous renown for her writing. She authored seven autobiographies—most famously, I Know Why the Caged Bird Sings (1969)—as well as several collections of essays, theatrical works, and volumes of poetry. In 1993, at the request of president-elect Bill Clinton, Angelou composed an original poem, titled “On the Pulse of the Morning,” which she read at Clinton’s inauguration.In 1994 the NAACP presented Angelou with the prestigious Spingarn Medal, which has been described as the “African American Nobel Prize.” In 2009 Angelou was again honored by the NAACP, receiving an Image Award for her book, Letter to my Daughter.In 1995 Angelou spoke at the Million Man March organized by Nation of Islam leader Louis Farrakhan. That same year, she lent hersupport to the convicted cop-killer and former Black Panther, Mumia Abu-Jamal. Indeed, Angelou joined such luminaries as Alec Baldwin,Derrick Bell, Noam Chomsky, Spike Lee, and Norman Mailer in signing a full-page New York Times ad advocating a new trial for Abu-Jamal.In a 1997 interview, Angelou lamented: “A black person grows up in this country — and in many places — knowing that racism will be as familiar as salt to the tongue.” Reasoning from that premise, she lauded affirmative action and Head Start as programs that were not only “good for the country” but quite necessary—because, she said, “the playing field” had been “terribly unlevel, terribly unfair for centuries.” In the same interview, Angelou was asked if she thought “our free-market system—capitalism itself—creates divisions and inequality,” to which she replied: “Yes. Absolutely. Unfortunately, I can’t find many other ‘isms’ that don’t do the same thing.”In March 2006 Angelou participated in a New York City event honoring the late Rachel Corrie, an American anti-Israel activist who had been accidentally killed while trying to block an Israeli anti-terror operation in 2003. Angelou praised Corrie as a “peace lover” who possessed exceptional “courage.” Others who spoke at the New York gathering included Anthony Arnove, Huwaida Arraf, Brian Avery,Eve Ensler, Hedy Epstein, Amy Goodman, Vanessa Redgrave, Ora Wise, Howard Zinn, and James Zogby…. 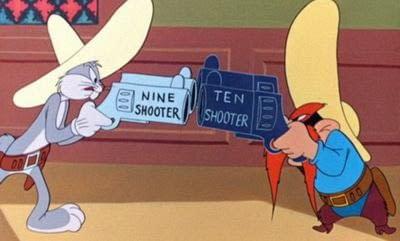 Investors Daily Business has a story about the extreme goals of Obama appointee picks. In this case it is his [OBAMA!] U.S. Surgeon Generals choice:

Second Amendment: The administration’s choice to be the nation’s doctor in chief views gun ownership as a public health issue and not a constitutional right, and wants doctors to query patients about guns in their homes.

Cop-killer Mumia Abu-Jamal’s champion, Debo Adegbile, President Obama’s defeated pick to be assistant attorney general for the civil rights division at the Department of Justice, is not the only radical on President Obama’s wish list.

Another guy who seems like he can tell ordinary citizens what to do and what not to do.

Murthy is the 36-year-old president and co-founder of the anti-gun group Doctors for America, which advocates ObamaCare and gun control laws.

His group, which has been dubbed “Docs vs. Glocks,” has pushed Congress to ban “assault” weapons and “high-capacity” magazines.

He also wants to spend more tax dollars on more research to prove that fewer guns mean a lower crime rate, despite the fact that a number of reputable studies prove the opposite.

The call for universal background checks, including at all gun shows, ignores that the guns Adam Lanza used at Sandy Hook were legally purchased and registered by his mother.

Just such a gun-free zone policy is why the Aurora, Colo., shooter carefully chose the theater he did. And unlike the mall in Clackamass, Ore., where a concealed-carry holder prevented a massacre, there was no one in Aurora to shoot back.

At Sandy Hook, 27-year-old teacher Victoria Soto hid students in a bathroom or closet and died trying to protect them from shooter Lanza. If she, the principal or any of the other adults at the school had access to a firearm, things might have turned out differently.

A recent Department of Justice study found only 0.7% of guns were purchased at gun shows and only 20% of guns used in crimes were purchased anywhere. Chicago street gangs, which are responsible for most of that city’s homicides, are unlikely to line up for gun permits.

The 1994 Assault Weapons Ban, which did nothing to prevent Columbine, was largely based on a weapon’s cosmetic appearance, not on its capability for carnage.