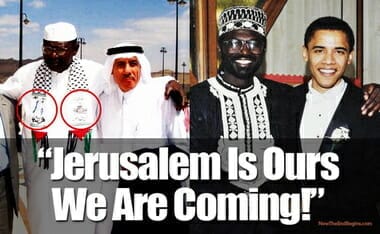 Breitbart notes this crazy “bedfellow” syndrome Obama has with Islamists:

Sudan’s foreign minister, a hardcore Islamist with a long history of orchestrating mass atrocities and other crimes against humanity, has been invited to attend the National Prayer Breakfast in Washington, DC on Thursday, February 4.

The National Prayer Breakfast is an annual event hosted by members of the United States Congress and organized on their behalf by The Fellowship Foundation. Religious and political leaders from around the world are invited to the breakfast, also known as the “Presidential Prayer Breakfast,” since the President of the United States is always in attendance. Reportedly, in addition to foreign minister Ali Ahmed Karti, the U.S. State Department has invited Dr. Ibrahim Ghandur, the deputy chairman of the National Congress Party – Sudan’s ruling political party – to the breakfast.

Sudanese and American activists will gather outside the event’s Washington Hilton location at 9:00 a.m. to protest the inclusion of these representatives of Sudan’s genocidal government as attendees are exiting the hotel. They have also created an online petition to the National Prayer Breakfast’s 2015 co-chairs, Senators Robert Casey (D-PA) and Roger Wicker (R-MS), along with Fellowship Foundation leader, Douglas Coe, urging that the invitation to Karti be rescinded.

Ali Ahmed Karti is well known by Sudanese and South Sudanese alike. He first attained notoriety in the early 1990’s as the commander of the Popular Defense Force (PDF), the Islamist militia tasked by Sudan’s National Islamic Front regime with raiding South Sudanese villages and taking women and children as slaves. The PDF went on to assist the murderous Janjaweed, the Arab militia used by the Sudanese government in Khartoum to commit genocide in the western Sudan region of Darfur.

Today Karti and the other top leaders of Sudan’s National Islamic Front/National Congress Party regime, including Sudan President Omar al Bashir, preside over ongoing genocidal war in the country’s Nuba Mountains and Blue Nile State. Karti committed to cleansing those regions of the black African indigenous groups through over three years of ongoing aerial bombardment, scorched earth campaigns, and the banning of international food aid. In addition, the foreign minister is accused of instigating the slaughter of hundreds of Darfurian refugees sheltering in Bentiu, South Sudan during an attack by rebels under the leadership of South Sudan’s former vice president, Riek Machar.

Remembrance of the 100th anniversary of the Armenian genocide is one of the themes of this year’s prayer breakfast. Perhaps the breakfast organizers don’t realize that the massacred Armenians share a common enemy with the marginalized Sudanese people groups. Inviting officials of what is arguably the world’s most genocidal regime to the National Prayer Breakfast is an insult to the victims of that genocide as well as to the millions of victims of religious, racial, and ethnic genocide in Sudan and South Sudan. Shoebat sheds some light on some previously unknown [to me] information in regards to the recent prayer breakfast where the Presidents slammed Christianity:

In addition to Barack Obama comparing ISIS terrorists to righteous Crusaders at the National Prayer Breakfast, seated near him was Ali Ahmed Karti, the foreign minister of Sudan. Sudan is a country that has been listed as an official State Sponsor of Terrorism since 1993. One of the reasons for this is that five Sudanese nationals were found to have been involved in the first attack on the World Trade Center and in the subsequent plot to bomb New York City landmarks.

It’s worth noting that in addition to Sudan being led by President Omar al-Bashir who is wanted for war crimes against humanity by the International Criminal Court (ICC), that country has a connection to both World Trade Center attacks (1993 and 2001). Al-Bashir’s regime was in power during both and has been since 1989, when al-Bashir joined a jihadist named Hassan al-Turabi in a coup.

Now it’s learned that the foreign minister of Sudan was present at the National Prayer Breakfast, an event sponsored by the Fellowship Foundation, a Christian-based organization (not Muslim):

Activists also say the presence of the foreign minister, Ali Ahmed Karti, at the breakfast as well as reports of meetings with administration officials could signal that Washington is considering normalizing relations with Sudan. The International Criminal Court (ICC) indicted President Omar al-Bashir of Sudan in 2009 for war crimes and genocide in the southern region of Darfur, where the United Nations says government forces have killed as many as 300,000 people in non-Arab rebel tribes….

And more on this connection between the Muslim Brotherhood, the convicted war criminals of the Sudan, and terror:

It has been learned that the relationship between President Barack Obama’s half-brother Malik Obama and Sudan’s President Omar Al-Bashir is much closer than previously thought. Malik is the Executive Secretary of the Islamic Da’wa Organization (IDO) as reported by all major Saudi press, including Okaz.

How significant is this?

Very significant. The IDO has been created by the Sudanese Government, which is considered by the U.S. State Department as a terrorist state. This places Malik Obama in bed with terrorists and working as an official with a terrorist state.

We have the evidence to prove it – meetings, photos, et. al.

Bashir is wanted by the International Criminal Court (ICC) on seven counts relating to crimes against humanity. As such, Bashir is the head of a country that the U.S. State Department has identified as a State Sponsor of terrorism, a designation issued in 1993.

In 2010, Malik Obama attended the Islamic Da’wa Organization (IDO) conference in Khartoum, the capital of Sudan. One of the objectives of the IDO is to spread Wahhabist Islam across the African continent.

Bashir wasn’t just present at the conference; he supervised it. In this photo, from the Barack H. Obama Foundation (BHOF) website, headed by Malik, Bashir can be seen dressed in black, to the right. Another man to take notice of is seated directly to the right of Bashir; his name is Suar Al Dahab (more on him later):

I have, likewise, dealt with the close ties in this administration to the Muslim Brotherhood. Obama has invited them to the White House, as well as supported their rise in Egypt. Sick. The following Examiner excerpt comes with a h/t to my mom:

Shoebat stated that one of the reports he did in the past, he showed that Malik is a member of the Islamic Da’wa Organization (IDO), an arm of the Sudanese government, which is led by President Omar al-Bashir, who is himself a member of the Muslim Brotherhood.

Translated by Shoebat, Al-Jebali stated in an interview, “I want to inform the American people that their president’s brother Obama is one of the architects of the major investments of the international organization of the Muslim Brotherhood.”

“We will carry out the law and the Americans will not stop us. We need to open the files and begin court sessions. The Obama administration cannot stop us… they know that they supported terrorism. We will open the files so these nations are exposed, to show how they collaborated with them [the terrorists]. It is for this reason why the American administration fights us.”

Shoebat has extensively covered Malik Obama in relation to President Obama and the Muslim Brotherhood.

In a previous report, Shoebat revealed that the IDO was created by the Sudanese Government, which is considered by the U.S. State Department as a terrorist state. Since Malik Obama is a member of the IDO, this puts him in direct connection with Islamic terrorists as well an official with a terrorist state.

The Obama Administration’s involvement with Egypt, Libya, and the Muslim Brotherhood have been well-documented by the Paulding County Republican Examiner (PCRE).