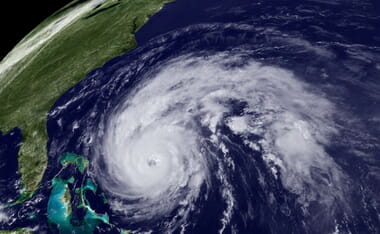 Here are some stories on these previous storms:

…While media outlets are suggesting climate change is to blame for exacerbating Hurricane Harvey’s conditions, a much worse hurricane hit Texas more than a century ago—before Americans drove to work.

The media have been quick to blame climate change for the devastation, which as of this writing has resulted in 30 flood-related deaths.

Environmentalists have often told Americans to become vegans to stop climate change, to “fly less, drive less, and eat less meat” and have fewer children to save the planet.

There was a time when Americans were not flying, and hardly any were driving. And the storms were worse.

The Galveston Hurricane of 1900 was the most deadly natural disaster in American history, which led to an estimated 8,000 deaths. Kevin Murnane writing for Forbes notes the many similarities between Galveston and Harvey, including that both were category 4 hurricanes when they hit landfall off the Texas coast. Winds from Galveston were faster, at 145 mph compared with Harvey’s 130 mph, and its height of the storm surge was 15.7 feet, also higher than Harvey.

Many media reports blaming climate change for Harvey used Michael E. Mann, a professor at Penn State and author of the controversial global warming “hockey stick” graph, as their source. Mann’s graph was widely used in the late 1990s to connect human activities to global warming.

Mann was later found to have “exaggerated” the impact of global warming in the graph by using “inappropriate methods.”

While careful to say climate change did not directly cause Harvey, the Washington Post said it “exacerbated the storm conditions,” linking to a piece written by Mann in the Guardian, calling it a “fact” that climate change made Harvey worse.

“Human-caused warming is penetrating down into the ocean,” Mann claims. “It’s creating deeper layers of warm water in the Gulf and elsewhere.”

“Harvey was almost certainly more intense than it would have been in the absence of human-caused warming, which means stronger winds, more wind damage and a larger storm surge,” he added.

Mann ignores the fact that the Galveston Hurricane had a storm surge of 15.7 feet, higher than the 7- to 12-feet storm surges seen from Harvey.

Man-made global warming is mainly attributed to carbon emissions, from industry and from transportation. There were only 8,000 vehicles in the entire country in 1900. Only 663 million tons of CO2 were emitted, compared with 5.333 billion today….

Take particular note of the four records in Texas:

Storm Harvey never got anywhere near these sort of totals. And we find a very similar picture when we review global records, with the most recent record being as long ago as 1980.

(NOT A LOT OF PEOPLE KNOW THAT)

JOE BASTARDI notes that Harvey is tied for 14th:

Perhaps a more intriguing question is how did its companion, disturbance 92L, come all the way across the Atlantic in a classic arcing path through Florida and up the East Coast *and fail to develop? What does that tell us?

There is much being made of Harvey and climate change. Meteorologically, as far as the intensity of the storm, let’s see where it ranks among landfalling Category 4 or 5 storms.

It’s tied for 14th. Look at the storm above it, Hazel. Now, let me ask you: Which is the more extreme as far as deviation from normal with pressure, which is a good metric to objectively evaluate how extreme a tropical cyclone is — a storm that hit in mid October in North Carolina, or one that hits on the central Texas Gulf Coast in late August? Let’s also look at Harvey in relation to other hurricanes in Texas. Behind it is the 1915 Galveston hurricane. That is the lesser of the two evils, because of 13th right above Harvey is the 1900 Galveston hurricane that killed 6,000-12,000 people. And right above that one is the Freeport hurricane of 1932. Notice when these are occurring. Then there is the 1916 cyclone in Texas — just a year after the 1915 Galveston hurricane — and Carla in 1961. Again, this all occurred over 50 years ago. Then there is the 1886 Indianola hurricane.Tthey are all hitting in the area that Harvey hit. So the question becomes, if those same storms, almost all stronger, from many years ago hit today, would they be a sign of climate change? Why is Harvey — and not to downplay the storm, but it was one of many and less intense than most — a sign the climate is changing, but these other storms would not be?

So if the 1935 Labor Day hurricane — the most powerful storm to be recorded hitting the US, a storm that went from a tropical storm to a Cat 5 in 36 hours — occurs again, why would it be climate change now, but not then?

If the 1938 storm comes back — a storm that took down two billion board feet of trees in New England, had major river floods in western New England, flooded Providence with 13 feet of water in a storm surge, and had a wind gust of 186 mph at blue hill — occurs again, why would it be climate change now, but not then?

I can go on and on with countless storms.

The answer: It is nature doing what nature does. And coming out after the storm and claiming it’s something else reveals either ignorance of the past or, if you do know, an agenda based on deception. If I saw the people commenting on this now making a preseason forecast, or even five days before when the obsession was the eclipse, then perhaps I would be more open to those ideas. But telling people why after the what is Monday morning agenda-based quarterbacking. Perhaps that is the lesson of Harvey.

The “Weather Guys” Joe Bastardi and Joe D’Aleo discuss the professors fired and the grants allowed and not allowed [depending on your view of AGW] as well as the monies spent by our Federal Government in choosing sides (like in business) when the government should be totally removed from such lofty positions of choosing actions in the private sector and science. This war on persons who question the strict narrative of all that is Climate Change, are treated in similar fashion to those depicted in Ben Steins movie, Expelled. (Posted by: Religio-Political Talk)

For an example of how “dug in” the sciences can be [BELOW], see my MRCTV post: Nobel Prize Winner’s Treatment Prime Example of Bias in “Scientism”

Joe Bastardi, Joseph D’Aleo, Alan Lammey, and guest Harold Ambler dissect some of the preconceived ideas being assumed by politicians such as Hillary Clinton in the cuture war of global warming, e.g., climate change. (Posted by Religio-Political Talk)

Also, predictions made in a religious/eschatological sense that will/have fail[ed]: