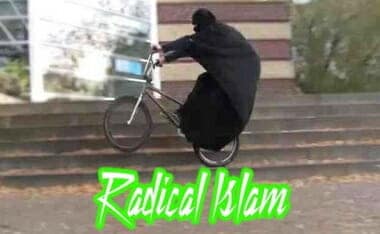 TWITTER THREAD: Here are all the idiotic leftists who immediately jumped to politicize the tragic Boulder shooting to push their narrative, only for it all to fall apart when it turns out the shooter is muslim… 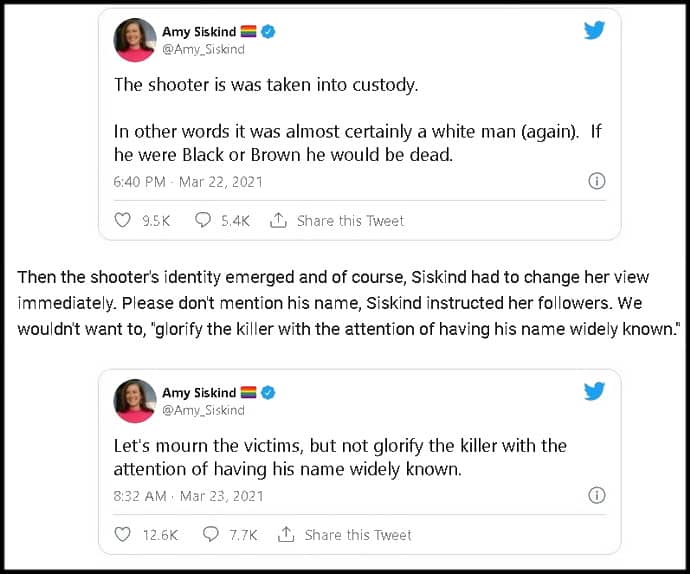 Colorado authorities released the identity of the alleged Boulder supermarket shooter on Tuesday morning. Ahmad Al Aliwi Alissa, 21, is accused of opening fire and killing 10 people during the Monday massacre.

Boulder Police named the Arvada, Colorado, resident as the injured suspect seen in video following the deadly mass shooting Monday at a King Soopers supermarket. The man allegedly opened fire on customers and killed a Boulder police officer, 51-year-old Eric Talley, during the shooting. The deceased victims range in age from 20 years old to 65 years old. A law enforcement press release identified his full name as Ahmad Al Aliwi Alissa. A Facebook page appearing to be that of the suspect features posts with quotes from the Islamic Prophet Muhammad….

JIHAD WATCH further discusses the victimhood status being applied to the shooter: 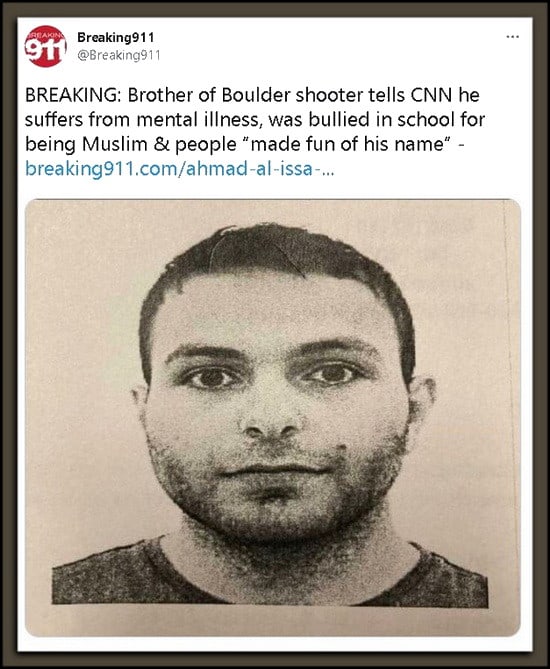 This guy knows all the victimhood buttons to push. Yet while the establishment media will take it all as proof that he is not a jihadi, what about the ISIS sympathies?

Yeah…. what about those? 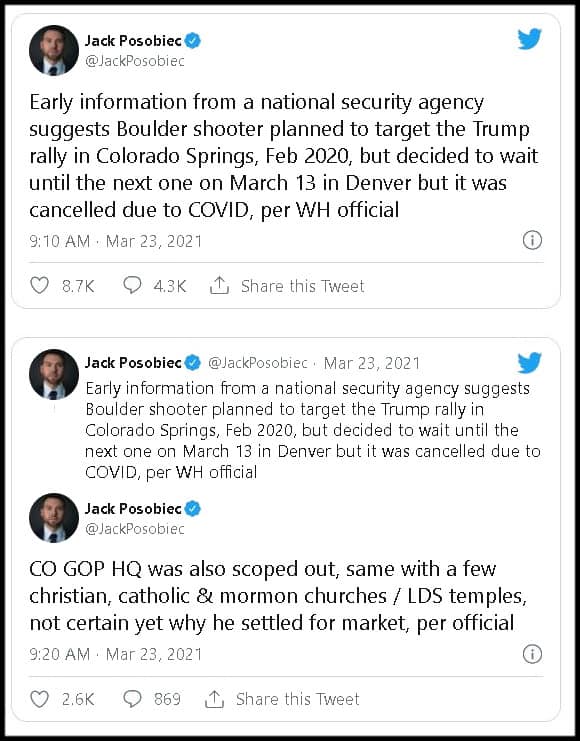 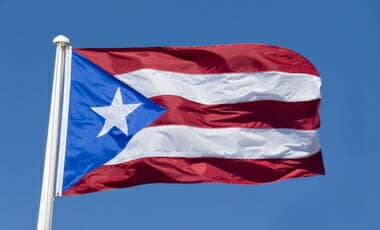 Friends who are Marco Rubio fans are posting stuff by Democrat politicians (who are rumored to be running for President) like this to make a point: So not only are these Republicans I know falling for the media Narrative (more on this below), but they are also being hooked by Democrat politicians building a base for a Presidential run. IN OTHER WORDS, the above Tweet was an opportunistic chance to politically score points against Trump…. JUST LIKE the picture of Mayor Cruz “wading in water” was a photo-op, as Jack Posobiec notes via his TWITTER:

But people are like LEMMINGS and swallow this stuff up due to their dislike of Trump (like the gal on the right).

In another Facebook convo, a friend said no one was helping and that people were dying. When a person pointed out the depth of help Puerto Rico was recieving… she was thanked for her “OPINION.” This is part of what she posted:

…Here is what someone on the ground in PR wrote:

“Just want to clear the air. I’m on the ground in Puerto Rico, I’m walking the streets with my wife every day, we are experiencing the pain and devastation that Maria left behind. I’m hearing a lot noise about US not helping the people of PR, THAT IS NOT TRUE, EVERY single Federal agency possible is here on the ground kicking some major ass, there are thousands of Military, Homeland security, FEMA personnel and the list goes on and on. The airport is not letting comercial planes fly because of ALL the military and first responders flights that are CONSTANTLY day in and day out flying in and out. If you have opinions with political agendas I want to tell you is not helping the cause. It’s time to unite, and stop the stupidity but is a right that….”

I expanded a bit:

Executive Orders by Trump as well as the go ahead with Federal Agencies.

THOSE are not opinions. Those are sticky things called facts.

Because of #FakeNews my people are not getting the credit they deserve for doing a great job. As seen here, they are ALL doing a GREAT JOB! pic.twitter.com/1ltW2t3rwy

Trump Is Right… It Is #FakeNews

I swear… people say they dislike the mainstream media (MSM), but are all on board when they see the singular San Juan Mayor Carmen Yulin Cruz, Puerto Rico, plastered all over the place saying, “we are dying.”

First in my mind’s eye is her accolades of a terrorist freed by Obama from the Marxist-Leninist bent….

Another eye-brow raiser is that the mayor of Guaynabo (the district just West of San Juan), Angel Perez,  has explained the disconnect San Juan Mayor Carmen Yulin Cruz has with relief efforts and coordination…. NOW…. keep in mind as you read this from a neighboring mayor that Mayor Cruz said this (via THE GUARDIAN): “…if it doesn’t solve the logistics ‘what we we are going to see is something close to a genocide’.”

The mayor of Guaynabo, Puerto Rico cast serious doubt Saturday on the claims made by San Juan Mayor Carmen Yulin Cruz, who has repeatedly attacked President Trump and accused him of abandoning Puerto Rico in the aftermath of Hurricane Maria.

Guaynabo’s mayor, Angel Perez, said in an interview with The Daily Caller that his experience with the federal government has been different from Cruz’s, in part because — unlike Cruz — he has been participating in meetings with officials from the Federal Emergency Management Agency (FEMA) and other federal agencies.

Mayor Perez told TheDC that the story Cruz is telling the media doesn’t mesh with what he has seen from the federal government.

“My experience is different. I have been participating in different meetings at the headquarters of FEMA and our government and the help is coming in and right now my experience is different from hers. I’m receiving help from the government, we are receiving assistance from FEMA, I got people over here helping us with applications for the people that have damage in their houses. And we have here in Guaynabo, we have thousands of people that lost partially or totally their houses,” said Perez, who is a member of Puerto Rico’s New Progressive Party.

Perez’s comments echoed what FEMA administrator Brock Long said on Saturday. Long defended Trump’s tweets blasting Cruz and indicated that Cruz has failed to connect with the FEMA command center set up on the island to help with the relief effort.

When asked about Cruz’s “genocide” statement, Perez said, “I don’t know why she is saying that. What I can tell you is my experience. She is not participating in any meetings and we had a couple already with the governors and with representation of FEMA and of HUD, of these whole federal agencies that have given us help and she’s not participating in those meetings and some mayors from her political party have been participating, so I don’t know why she is saying that. My experience is very different.”

“Some [mayors] would like the help to be faster but we also know that FEMA is dealing with what happened in Houston and in Florida and now in Puerto Rico,” Perez said…..

In other words — the only way logistics would fail is if the local government of a district failed to coordinate with their Federal Agencies. Hello? MkFly!

Here is a hugely funny pic of Mayor Cruz standing in front of supplies in her ports sent by America… where Cruz said the following: In the Mayor’s interview with Anderson Cooper, CNN, it was noted that,

But, people who profess a middle-ground, say they hate corporate media, and all the other colloquial sayings of people who hate Trump… THEY SURE swallow the MSM narrative >>>> HOOK-LINE-AND-SINKER — all while Leftist media are trying to make this Trump’s “Katrina.”