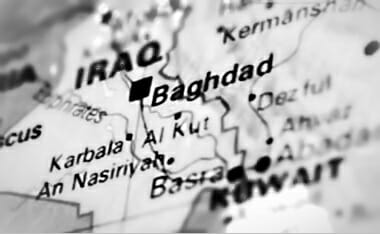 (Above Video) The caller notes that the narrative is that the Islamic State would have still come to power even if we kept troops in Iraq. Which is true, they would have still come to existence, in Syria. But Iraq would not have lost any cities or territories if we still had a presence in Iraq. The caller mentioned a force of 10,000 troops, it would have been closer to 30,000 troops. And having a base of operations in country would have allowed the administration to deal more effectively with the Islamic State in Syria (flying sorties, and supporting quick reaction [spec-ops] units activity), and the like.

(Above Video) Megyn Kelly Destroys Jen Psaki who can’t get off talking points.

(Above Video) Larry Elder (and Paul Bremer) dismantle older as well as new mantras flying around via our friends on the left. In the interview that is the centerpiece of the segment[s] here via Larry Elder, Erin “Monkey” Burnett gets all of her talking points smacked down. The only thing Miss Burnett accomplished was showing her bias/sarcasm well.

Here Bremer educates Erin with facts she knew, but refuses to deploy in her logic because it would ruin her defense of her Master Obama, “The planning in 2011, leaked very heavily from the Pentagon and the White House was to keep 20 to 30 thousand troops after 2011, the White House leaked that it wanted to only keep 3,000 troops, then they said to al-Maliki not only do we want a Status of Forces Agreement but you have to get it through your Parliament. So for the first time, to my knowledge, since 1945, we have 84 SOFA agreements around the world, we were telling the host government how to they proceed in approving that Status of Forces Agreement. That put al-Maliki in an impossible situation.”

Obama is SUCH a joke! HotAir has this:

….A dandy little edit here by the Free Beacon, via Ace. I know I’ve linked it before but the piece you want to read as accompaniment is Iraq hawk turned dove Peter Beinart lamenting all the ways Obama screwed up post-Bush American policy in the country. O wants you to believe at the end of the video here that he pushed hard to keep a residual American force inside Iraq for counterterrorism (i.e. counter-ISIS) operations but it’s simply not true. He didn’t push hard for it; when Maliki initially resisted his demand that U.S. troops be granted immunity from prosecution in Iraqi courts, O took that as his cue to pull everyone out. And that wasn’t the only time he indulged Maliki’s dumbest impulses. The story of the U.S. vis-a-vis Iraq after 2009, writes Beinart, is a story of disinterest and disengagement:

The decline of U.S. leverage in Iraq simply reinforced the attitude Obama had held since 2009: Let Maliki do whatever he wants so long as he keeps Iraq off the front page.

On December 12, 2011, just days before the final U.S. troops departed Iraq, Maliki visited the White House. According to Nasr, he told Obama that Vice President Tariq al-Hashimi, an Iraqiya leader and the highest-ranking Sunni in his government, supported terrorism. Maliki, argues Nasr, was testing Obama, probing to see how the U.S. would react if he began cleansing his government of Sunnis. Obama replied that it was a domestic Iraqi affair. After the meeting, Nasr claims, Maliki told aides, “See! The Americans don’t care.”

In public remarks after the meeting, Obama praised Maliki for leading “Iraq’s most inclusive government yet.” Iraq’s Deputy Prime Minister, Saleh al-Mutlaq, another Sunni, told CNN he was “shocked” by the president’s comments. “There will be a day,” he predicted, “whereby the Americans will realize that they were deceived by al-Maliki … and they will regret that.”

And now the day has come. Remember that the next time O walks out to the podium and acts indignant about Maliki clinging to power.

One more bit, this from Dexter Filkins, on just how much of a fight O put up in demanding a residual troop presence:

President Obama, too, was ambivalent about retaining even a small force in Iraq. For several months, American officials told me, they were unable to answer basic questions in meetings with Iraqis—like how many troops they wanted to leave behind—because the Administration had not decided. “We got no guidance from the White House,” Jeffrey told me. “We didn’t know where the President was. Maliki kept saying, ‘I don’t know what I have to sell.’ ” At one meeting, Maliki said that he was willing to sign an executive agreement granting the soldiers permission to stay, if he didn’t have to persuade the parliament to accept immunity. The Obama Administration quickly rejected the idea. “The American attitude was: Let’s get out of here as quickly as possible,” Sami al-Askari, the Iraqi member of parliament, said…

Some other things Mitt got right and “O” didn’t: 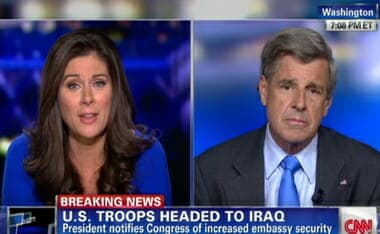 Larry Elder (and Paul Bremer) dismantle older as well as new mantras flying around via our friends on the left. In the interview that is the centerpiece of the segment[s] here via Larry Elder, Erin “Monkey” Burnett gets all of her talking points smacked down. The only thing Miss Burnett accomplished was showing her bias/sarcasm well.