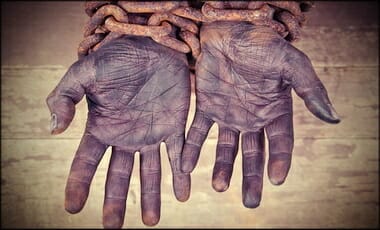 Mark Levin starts his show by reading from a 2004 article written by the Rev. Wayne Perryman entitled, “The Racist History of the Democratic Party.” It is also summed up in these three links, one to my VIMEO, and the others to my site (w/lots of media):

IF the narrative is pushed that reparations are to be given, it should be emphasized that one Party should repay them.

The Racist History of the Democratic Party

History reveals that every piece of racist legislation that was ever passed and every racist terrorist attack that was ever inflicted on African Americans, was initiated by the members of the Democratic Party. From the formation of the Democratic Party in 1792 to the Civil Rights movement of 1960’s, Congressional records show the Democrat Party passed no specific laws to help Blacks, every law that they introduced into Congress was designed to hurt blacks in 1894 Repeal Act. The chronicles of history shows that during the past 160 years the Democratic Party legislated Jim Crows laws, Black Codes and a multitude of other laws at the state and federal level to deny African Americans their rights as citizens.

History reveals that the Republican Party was formed in 1854 to abolish slavery and challenge other racist legislative acts initiated by the Democratic Party.

After the Civil War, Democrats murdered several hundred black elected officials (in the South) to regain control of the southern government. All of the elected officials up to 1935 were Republicans. As of 2004, the Democrat Party (the oldest political party in America) has never elected a black man to the United States Senate, the Republicans have elected three.

History reveals that it was Thaddeus Stevens, a Radical Republican that introduced legislation to give African Americans the so-called 40 acres and a mule and Democrats overwhelmingly voted against the bill. Today many white Democrats are opposed to paying African Americans trillions of dollars in Reparation Pay, money that should be paid by the Democratic Party.

Congressional records show it was Democrats that strongly opposed the passage of the 13th, 14th and 15th Amendments. These three Amendments were introduced by Republicans to abolish slavery, give citizenship to all African Americans born in the United States and, give Blacks the right to vote.

Congressional records show that Democrats were opposed to passing the following laws that were introduced by Republicans to achieve civil rights for African Americans:

Court records shows that it was the Democrats that supported the Dred Scott Decision. The decision classified Blacks and property rather than people. It was also the racist Jim Crow practices initiated by Democrats that brought about the two landmark cases of Plessy v Ferguson and Brown v. The Board of Education….