HotAir has a story, and its title is “Reid accuses Angle of lying about ‘War is lost’ statement.” HotAir goes on to say,

He’s not shy about it, either, as Aurelius discovers on Reid’s Twitter and Facebook accounts, as well as Reid’s “fact check” website. Too bad Harry Reid hasn’t got a clue about YouTube. While he claims that Angle referenced a remark made on March 3, 2007 about having to reach a political solution to the war in Iraq and not just a military solution, he seems to have missed the video that clearly shows Reid claiming that the war is, well … 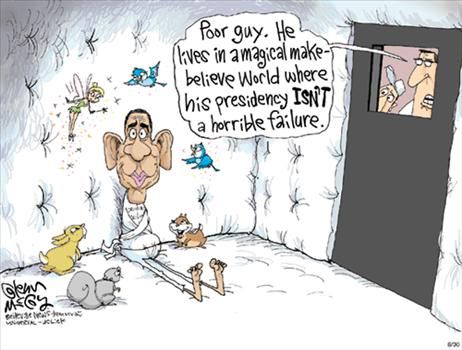 Uncle Jimbo — via Big Peace — gives us something to chew on:

….Obama is a politician and that is where he feels comfortable. he even felt obligated to remind us that “ending” the Iraq War was a campaign promise of his.

So tonight, I am announcing that the American combat mission in Iraq has ended. Operation Iraqi Freedom is over, and the Iraqi people now have lead responsibility for the security of their country.

This was my pledge to the American people as a candidate for this office.

Well thank you candidate Obama, you will soon be back in your comfort zone running for re-election. Too bad you couldn’t find some time to actually command the troops in the interim.

He also managed to bring up the monetary cost of the war as one of its downsides.

We have sent our young men and women to make enormous sacrifices in Iraq, and spent vast resources abroad at a time of tight budgets at home…..We have spent over a trillion dollars at war, often financed by borrowing from overseas.

A guy who pissed away more than a trillion dollars paying off his political allies ought to watch what he says. If we are willing to go to war then we shouldn’t whine about the money it costs. Hear John F. Kennedy speak.

Let every nation know, whether it wishes us well or ill, that we shall pay any price, bear any burden, meet any hardship, support any friend, oppose any foe, in order to assure the survival and the success of liberty….

To those peoples in the huts and villages across the globe struggling to break the bonds of mass misery, we pledge our best efforts to help them help themselves, for whatever period is required—not because the Communists may be doing it, not because we seek their votes, but because it is right. If a free society cannot help the many who are poor, it cannot save the few who are rich.

Let’s contrast Obama’s bloodless lecture to President Bush’s clarion call for victory when he announced the surge Obama couldn’t bring himself to mention.

The challenge playing out across the broader Middle East is more than a military conflict. It is the decisive ideological struggle of our time. On one side are those who believe in freedom and moderation. On the other side are extremists who kill the innocent, and have declared their intention to destroy our way of life. In the long run, the most realistic way to protect the American people is to provide a hopeful alternative to the hateful ideology of the enemy, by advancing liberty across a troubled region. It is in the interests of the United States to stand with the brave men and women who are risking their lives to claim their freedom, and to help them as they work to raise up just and hopeful societies across the Middle East…

The changes I have outlined tonight are aimed at ensuring the survival of a young democracy that is fighting for its life in a part of the world of enormous importance to American security. Let me be clear: The terrorists and insurgents in Iraq are without conscience, and they will make the year ahead bloody and violent. Even if our new strategy works exactly as planned, deadly acts of violence will continue — and we must expect more Iraqi and American casualties. The question is whether our new strategy will bring us closer to success. I believe that it will.

Best Call of the Week from Papa Giorgio on Vimeo.