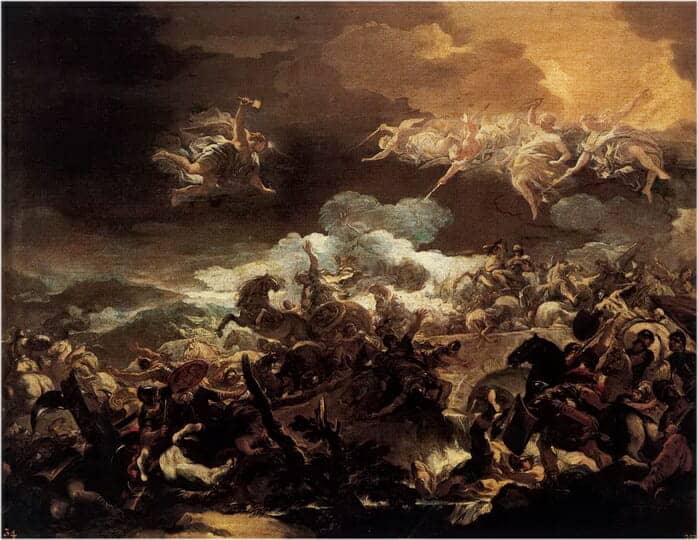 This is a bit of a convoluted rant from YouTube by a cult member (or at least, a supporter). My response will not be my own, but Matt Flannagan and Paul Copan’s response to the verse mentioned by this cult member.

…the teachings of the Bible? You mean where “God” instructs Moses and them to slaughter entire cities including babies(except the virgin women) and rape women…or where Jesus allows his enemies to capture and crucify him? Who are you trying to fool…thank goodness Fard Muhammad came to kill religion…if you are standing by the Bible as your moral base then you have no moral base to stand on….you would mutilate your son’s penis because your poison bible tells you to….the Father Allah was a greater God than Jesus…at the very least he didn’t go out like a punk like your boy did…the enemy of the planet right now is the global system of white domination…and this system oppresses everyone including so called white folks…you seriously lack understanding…the Father Allah was not anti white or pro black…

…your poison book is in every hotel room and it states in the old testament….. “Moses, Eleazar the priest, and all the leaders of the people went to meet them outside the camp. But Moses was furious with all the military commanders who had returned from the battle. “Why have you let all the women live?” he demanded. “These are the very ones who followed Balaam’s advice and caused the people of Israel to rebel against the LORD at Mount Peor. They are the ones who caused the plague to strike the LORD’s people. Now kill all the boys and all the women who have slept with a man. Only the young girls who are virgins may live; you may keep them for yourselves.” ….om just trying to show you how ridiculous you look promoting such a filthy poisonous book and at the same time judging a cipher that was only founded to fix the mess that european christians started…and now we gotta fix the mess in your video….Allah the chosen one, who left temple 7 in 1963 and borned the first 5 percenters was no racist and if he was a racist he problably would be alive today…its like you damed if you do and u damned if you don’t with yaw people…nothing pleases you except for mucus, pus and white blood cells…

This is with thanks to Moral Apologetics. Here is the text from the wonderful book, Did God Really Command Genocide?

The third example Morriston cites to make his point is the defeat of Midian as recorded in Numbers 31. The Israelites fought against Midian, as the Lord commanded Moses, and killed every man (v. 7). After the battle, however, Moses commanded Israel to kill all the boys and every woman who has slept with a man, but save for yourselves every girl who has never slept with a man. Morriston says Yahweh was angered by the fact that some young Israelite men had worshiped Baal alongside their new Midianite brides, writing, “Not only must the Israelites be punished, but the Midianites must be punished for causing the Israelites to be punished.” God’s stated reasons, according to Morriston’s thinking, are inadequate.

But Morriston appears to have misread the text. First, consider his claim that the text explicitly states that God’s reason for commanding the killing of the Midianite women and boys was “spiritual infection” because “some young Israelite men had worshiped Baal alongside their new Midianite brides.” There are several problems with this.

First is the fact that, in the text Morriston cites (Num. 31:17-18), God himself does not explicitly command Israel to kill all the Midianite women and boys. God’s command to Moses regarding the Midianites is actually recorded in Numbers 25:17-18 and 31:1-2. God explicitly commands Israel to respond to the Midianites’ spiritual subterfuge by fighting against the Midianites and defeating them. The reasons why Israel is to obey isn’t the spiritual infection of women as Morriston says, but rather the fact that Midian has been hostile toward and deceived Israel.

The Numbers 31 text does not explicitly attribute the command to kill the women and boys to God, but to Moses. Morriston acknowledges this, but suggests three reasons why this observation doesn’t come to much. (1) Moses is regularly characterized as being very close to Yahweh, faithfully obeying his instructions most of the time; (2) Yahweh expresses no disapproval of anything Moses does in this story; and (3) Yahweh himself is the principal instigator of the attack on Midian.

These responses, however, are inadequate. Consider the last point first. The fact that someone is the “principal instigator” of an attack doesn’t entail that he approves of every single action that takes place within the battle in question. Similarly with 2: the lack of explicit disapproval in the text does not entail approval. Morriston’s argument is an appeal to ignorance; absence of evidence is not evidence of absence. It is not uncommon in biblical narratives for authors to describe sinful behavior without expressing explicit disapproval. In most cases, no doubt, the author expects the reader to know certain actions are right and wrong.

Finally, regarding 1, the fact that someone is portrayed in the text as close to God or faithful to him does not mean that every action he is recorded as doing is commanded or endorsed by God. Consider David, or Abraham.

A second instance of Morriston misreading the text is that not only does he attribute Moses’s reasons to God; he also misstates the reasons Moses does give in the context. The real issue is that the Midianite women had been following the devious advice of the pagan seer, Balaam, who had been explicitly commanded by God not to curse Israel. Balaam had led the Israelites into acting treacherously at Baal-Peor. This is the clearly stated issue (31:16). What occurs, when the background is taken into account, is not that some Israelites marry Midianite women, but rather these women use sex to seduce Israel into violating the terms of their covenant with God—an event that threatened Israel’s very national identity, calling, and destiny. This act was in fact deliberate.

So Morriston’s comments are far off the mark when he insists that the Midianites could not have been trying to harm the Israelites by inviting them to participate in the worship of a god in whom they obviously believed. The whole point of the exercise was to get God to curse Israel so that a military attack could be launched by Moab and Midian. The picture isn’t one of innocent Midianite brides, but acts tantamount to treason and treacherous double agents carrying on wicked subterfuge.

Note that the problem wasn’t God’s opposition to Israelites marrying Midianites per se. Indeed, Moses married Zipporah, a Midianite, and he received wise counsel from his father-in-law, Jethro, a Midianite priest.