The name, “Jehovah,” comes from the mixing of two words. Hebrew has no vowels, so how did we end up with God’s name having them? God’s name in the Hebrew was YHWH, but the Jews took the passage of taking God’s name in vain as applying to even just mentioning His name. So, in public readings, the Jews would use such words as ADONAI (or adhonay), meaning LORD. As translations of the scriptures became common, the merging of the two words (YHWH and adonai) became warranted to allow vowels into the word via the changing dialect.

Therefore, the letters a – o – a were taken from adonai and added to YHWH. The result for the English version of God’s name? Yahovah. or Jehovah. Now, the Jehovah Witness would say that Jehovah is the most correct form of God’s name. Unfortunately for them, it is a crude mixture of two.

Back on track. Lets see what some resources say the correct pronunciation of YHWH is:

Jehovah – “Intended as a transition of Hebrew YAHWEH, the vowel points of Hebrew ADHONAY (my lord) being erroneously substituted for those of YAHWEH; from the fact that in some Hebrew manuscripts the vowel points of ADHONAY (used as a euphemism for YAHWEH) were written under the consonants YHWH of YAHWEH to indicate that ADHONAY was to be substituted in oral reading of YAHWEH. Jehovah is a Christian transliteration of the tetragrammaton long assumed by many Christians [not this one] to be the authentic reproduction of the Hebrew sacred name for God but now recognized to be a late hybrid form never used by6 the Jews.” Webster’s Third New International Dictionary

Jehovah – “is an erroneous form of the name of the God of Israel.” Encyclopedia Americana

Jehovah – “the pronunciation ‘Jehovah’ is an error resulting among Christians from combining the consonants YHWH with the vowels of ADHONAY.” Encyclopedia Britannica

Jehovah – “is a mispronunciation of the Hebrew YHWH the name of God. This pronunciation is grammatically impossible. The form ‘Jehovah’ is a philological impossibility” The Jewish Encyclopedia

Jehovah – “an erroneous pronunciation of the Tetragrammaton, or four-lettered name of God made up of the Hebrew letters Yod He Vav He. The word ‘Jehovah’ therefore is a misreading for which there is no warrant and which makes no sense in hebrew” The Universal Jewish Encyclopedia

Jehovah – “is an artificial form” The Interpreters Dictionary of the Bible

Jehovah – “When Christian scholars of Europe first began to study Hebrew, they did not understand what this really meant, and they introduced the hybrid name ‘Jehovah’… The true pronunciation of the name YHWH was never lost. Several early Greek writers of the Christian church testify that the name was pronounced ‘YAHWEH.’ This is confirmed, at least for the vowel of the first syllable of the name, by the shorter form Yah, which is sometimes used in poetry (e.g. Exodus 15:2)… The personal name of God of Israel is written in the Hebrew Bible with the four consonants YHWH and is referred to as the ‘Tetragrammaton.’ At least until the destruction of the First Temple in 586 B.C.E. this name was regularly pronounced with its proper vowels, as is clear from the Lachish Letters, written shortly before that date.” Encyclopedia Judaica

On page 195 of the Jehovah Witness book, Reasoning from the Scriptures, it reads that the original form was lost, and that no one actually knows the correct pronunciation of the name Yahweh: 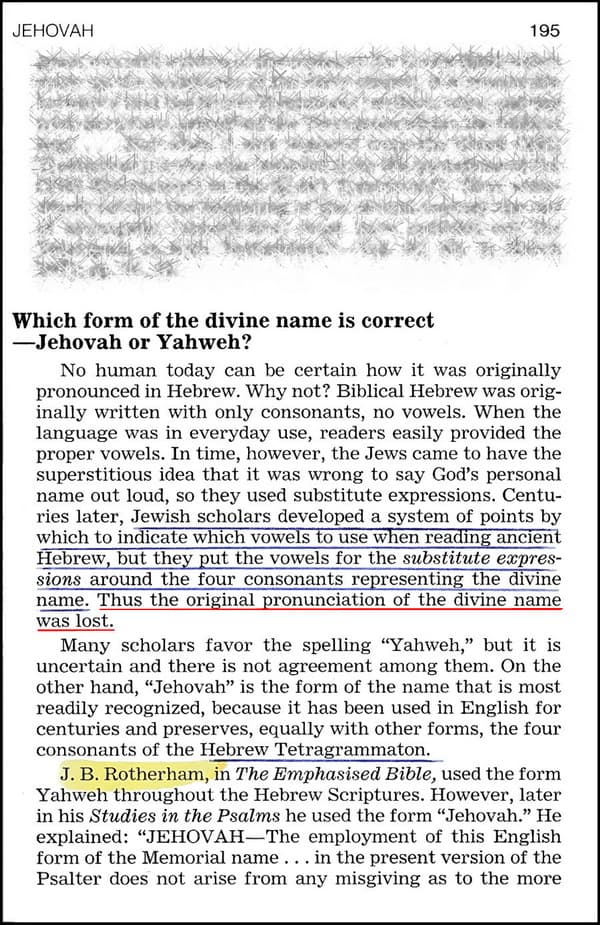 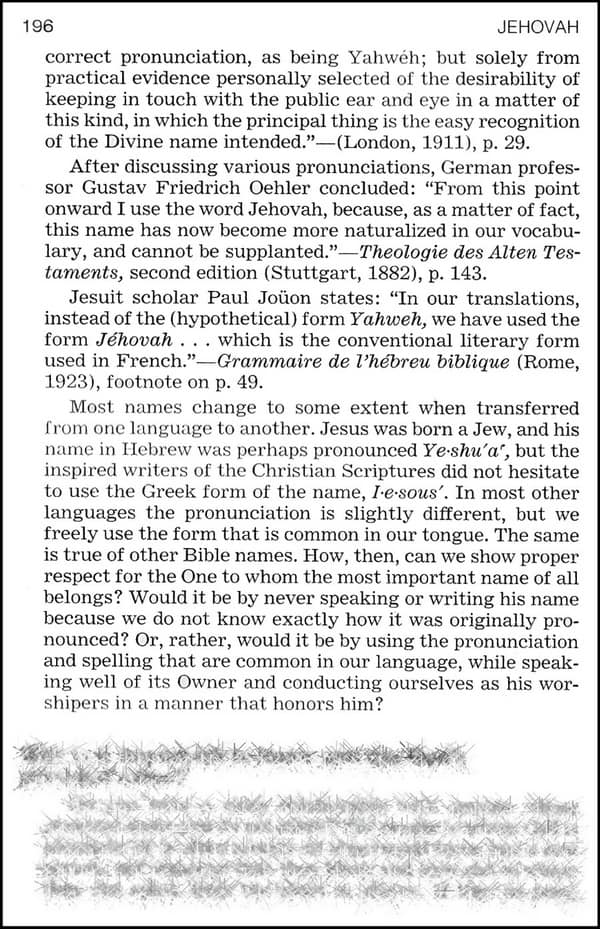 As usual, misinformation and misrepresentation.  But if page 195 in this book by the Watchtower disagrees with all the available evidence, the Jehovah Witness will clasp to the Watchtower’s understanding of truth.