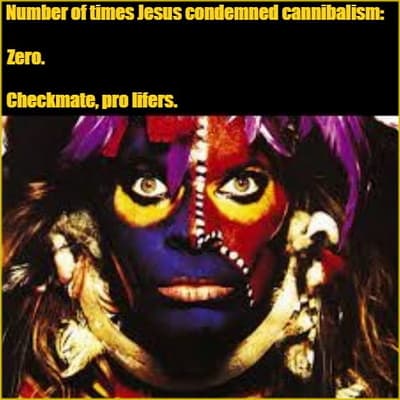 I saw a version of this via Facebook (to the right, click to expand in another window), but I thought it zeroed in on just one debate rather than allowing for use in a more general sense while also mentioning the “BIG TWO” — which is the abortion debate and same-sex-marriage. Not to mention that the color choice for the text is hard to read.

I chose a classic set of paintings of SATURN DEVOURING HIS SON. This story is a well-known Greek myth. The paintings chosen are by Peter Paul Rubens (left) and Francisco Goya (right). 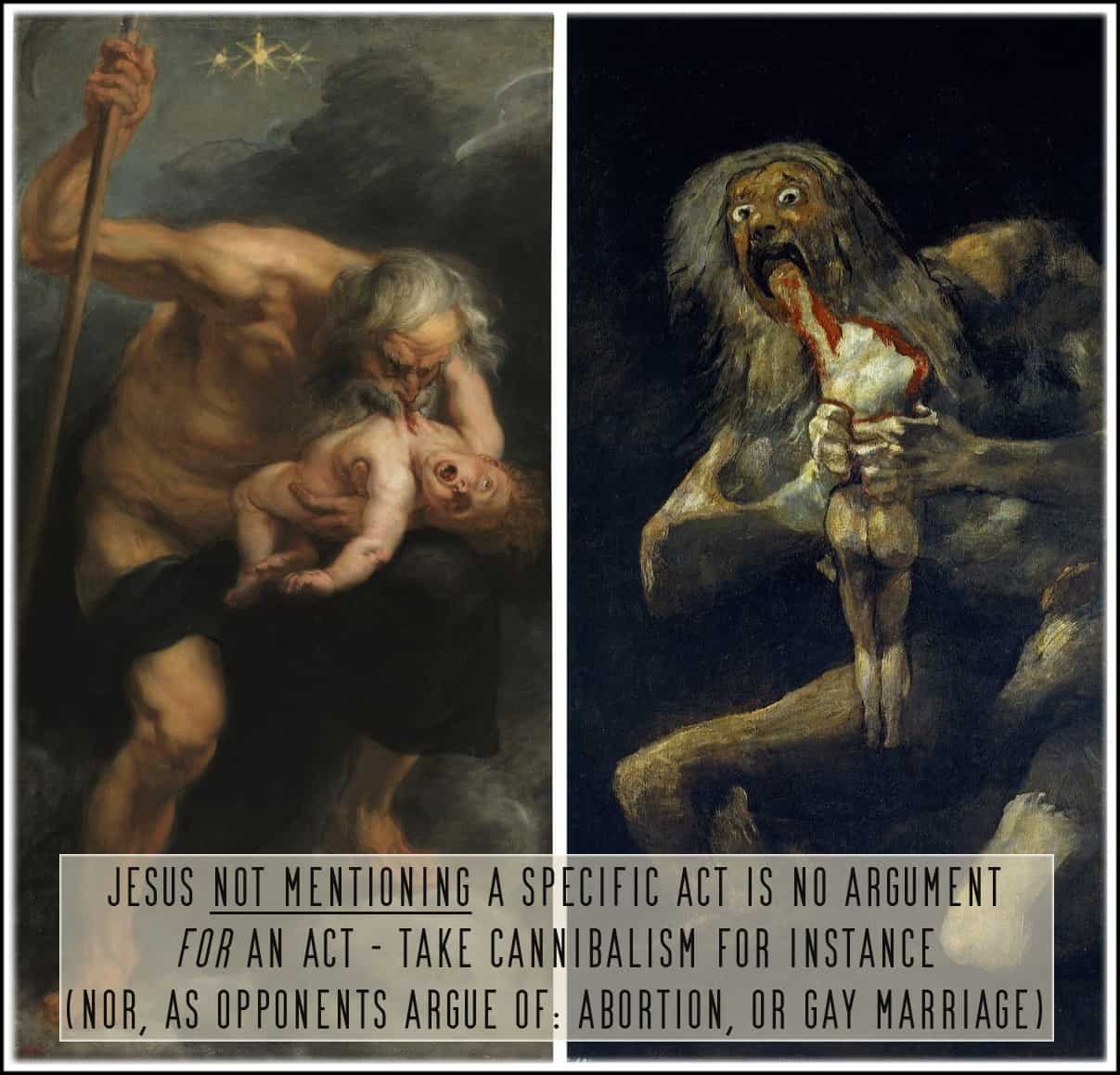 Here are some of my posts dealing with the “BIG-TWO.”

A quote regarding Natural Theory and cannibalism. First up is one of my oldest posts (pre-dating my time on this .com), and it is not “my” writing specifically — it is other sources I collated:

….Human beings also have other aspects to their nature, aspects that are not such noble features of their makeup. One is their method of sexual reproduction. And make no mistake: despite astonishing denials of organized homosexuality, human beings, as surely as deer or elephants, come equipped with a natural method of reproduction. Unlike in other species, however, these lower aspects in man share in man’s higher aspect, reason. The result is the virtue of temperance or self-control. The Founders of America understood that our rights stem from this capacity, the capacity for moral virtue.

Homosexuals like to argue that, since people are by nature free to choose, the choice of sodomy should be protected, at least as much as any other choice. However, the fact that people are free by nature to make choices does not mean that any choice they make is good or that all choices should be equal before the law. Some people choose to steal and lie. Some abandon their children or their wives or husbands. Some sink into the grip of drugs. Some evade the draft at their country’s need, or abandon their duty in the face of battle. These are bad choices, and when they are made, the rest of us must bear part of the cost. These things are wrong in a constitutional democracy, as much as they are wrong anywhere else.

On the other hand, liberal societies recognize that all sins cannot be, and must not be, punished under the law. A state powerful enough to do that is too powerful to control. That is why we are cautious in a free country, about telling others what to do. That is why Presidents often appeal to us to be upright, moral citizens, but they do not bring charges against us unless we break the law.

Still, we must not forget that democracies have the greatest in the practice of virtue by citizens, because in democracy the citizens themselves are the rulers. So it is that George Washington, one of the greatest moral examples in history, said in his First Inaugural Address: “There is no truth more thoroughly established than that there exists an indissoluble union between virtue and happiness…”

A liberal society might, then, find it prudent to ignore homosexuality. It might well deem it unwise to peer into private bedrooms. However, this is not the issue before us. Today the demand is that homosexuality be endorsed and promoted with the full power of the law. This would require us to abandon the standard of nature, the one standard that can teach us the difference between freedom and slavery, between right and wrong.

Once we abandon the standard of nature, what is to forbid us from resorting to any violation of nature that we please? Why should we not return to slavery, if we find it convenient? Or the practice of incest or adultery or cannibalism? Without an understanding that there is a higher law that limits human will – whether divine law or the “law of Nature or Nature’s God” which we can grasp through our reason – there is no basis to prohibit any activity. Anything becomes possible (which is why some [me included] refer to murder and homosexuality in the same stroke of the pen/keyboard, this analogy is now detailed in a more exhaustive manner above).

In fact, the rights sought by homosexual activists are not natural or constitutional rights (for the best chapter on this subject – why homosexuals should be fighting to keep the traditional definition of family – I suggest the book Relativism: Feet Planted Firmly in Mid-Air). They are the special rights granted ethnic minorities by affirmative action policies. These special rights would force businesses, schools, and virtually every institution in the land, public and private, to open their doors to homosexuals, and allow lawsuits to be brought against those that refuse….

And this excerpt as well from a counter conspiracy post of mine where I quote the indomitable David Berlinski: