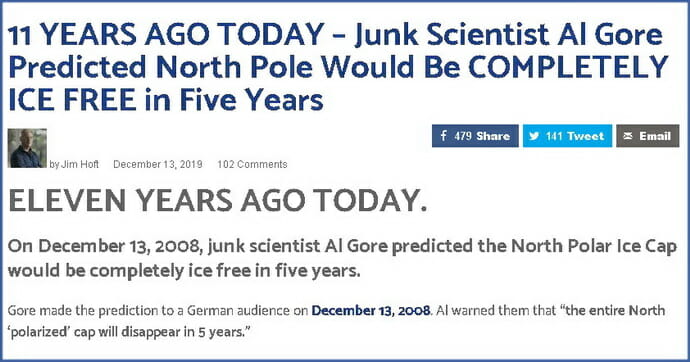 Recently, in 2014, the United Nations declared a climate “tipping point” by which the world must act to avoid dangerous global warming. “The world now has a rough deadline for action on climate change. Nations need to take aggressive action in the next 15 years to cut carbon emissions, in order to forestall the worst effects of global warming, says the Intergovernmental Panel on Climate Change,” reported the Boston Globe.

But way back in 1982, the UN had announced a two-decade tipping point for action on environmental issues. Mostafa Tolba, executive director of the UN Environment Program (UNEP), warned on May 11, 1982, that the “world faces an ecological disaster as final as nuclear war within a couple of decades unless governments act now.” According to Tolba, lack of action would bring “by the turn of the century, an environmental catastrophe which will witness devastation as complete, as irreversible as any nuclear holocaust.”

In 1989, the UN was still trying to sell that “tipping point” to the public. According to a July 5, 1989, article in the San Jose Mercury News, Noel Brown, the then-director of the New York office of UNEP was warning of a “10-year window of opportunity to solve” global warming. According to the Herald, “A senior U.N. environmental official says entire nations could be wiped off the face of the Earth by rising sea levels if the global warming trend is not reversed by the year 2000. Coastal flooding and crop failures would create an exodus of ‘eco-refugees,’ threatening political chaos.”

But in 2007, seven years after that supposed tipping point had come and gone, Rajendra Pachauri, then the chief of the UN IPPC, declared 2012 the climate deadline by which it was imperative to act: “If there’s no action before 2012, that’s too late. What we do in the next two to three years will determine our future. This is the defining moment.”

UN Secretary-General Ban Ki-moon announced his own deadline in August 2009, when he warned of “incalculable” suffering without a UN climate deal in December 2009. And in 2012, the UN gave Planet Earth another four-year reprieve. UN Foundation president and former U.S. Senator Tim Wirth called Obama’s re-election the “last window of opportunity” to get it right on climate change.

Heir to the British throne Prince Charles originally announced in March 2009 that we had “less than 100 months to alter our behavior before we risk catastrophic climate change.” As he said during a speech in Brazil, “We may yet be able to prevail and thereby to avoid bequeathing a poisoned chalice to our children and grandchildren. But we only have 100 months to act.”

To his credit, Charles stuck to this rigid timetable—at least initially. Four months later, in July 2009, he declared a ninety-six-month tipping point. At that time the media dutifully reported that “the heir to the throne told an audience of industrialists and environmentalists at St James’s Palace last night that he had calculated that we have just 96 months left to save the world. And in a searing indictment on capitalist society, Charles said we can no longer afford consumerism and that the ‘age of convenience’ was over.”

At the UN climate summit in Copenhagen in 2009, Charles was still keeping at it: “The grim reality is that our planet has reached a point of crisis and we have only seven years before we lose the levers of control.”

As the time expired, the Prince of Wales said in 2010, “Ladies and gentlemen we only—we now have only 86 months left before we reach the tipping point.”

By 2014, a clearly exhausted Prince Charles seemed to abandon the countdown, announcing, “We are running out of time. How many times have I found myself saying this over recent years?”

In the summer of 2017, Prince Charles’s one-hundred-month tipping point finally expired.26 What did Charles have to say? Was he giving up? Did he proclaim the end times for the planet? Far from it. Two years earlier, in 2015, Prince Charles abandoned his hundred-month countdown and gave the world a reprieve by extending his climate tipping point another thirty-five years, to the year 2050!

A July 2015 interview in the Western Morning News revealed that “His Royal Highness warns that we have just 35 years to save the planet from catastrophic climate change.” So instead of facing the expiration of his tipping point head on, the sixty-nine-year-old Charles kicked the climate doomsday deadline down the road until 2050 when he would be turning the ripe age of 102. (Given the Royal Family’s longevity, it is possible he may still be alive for his new extended deadline.)

Former Irish President Mary Robinson issued a twenty-year tipping point in 2015, claiming that global leaders have “at most two decades to save the world.”

Al Gore announced his own ten-year climate tipping point in 2006 and again in 2008, warning that “the leading experts predict that we have less than 10 years to make dramatic changes in our global warming pollution lest we lose our ability to ever recover from this environmental crisis.” In 2014, with “only two years left” before Gore’s original deadline, the climatologist Roy Spencer mocked the former vice president, saying “in the grand tradition of prophets of doom, Gore’s prognostication is not shaping up too well.”

Penn State Professor Michael Mann weighed in with a 2036 deadline. “There is an urgency to acting unlike anything we’ve seen before,” Mann explained. Media outlets reported Mann’s made a huge media splash with his prediction, noting “Global Warming Will Cross a Dangerous Threshold in 2036.”

Other global warming activists chose 2047 as their deadline, while twenty governments from around the globe chose 2030 as theirs, with Reuters reporting that millions would die by 2030 if world failed to act on climate: “More than 100 million people will die and global economic growth will be cut by 3.2% of GDP by 2030 if the world fails to tackle climate change, a report commissioned by 20 governments said on Wednesday. As global avg. temps rise due to ghg emissions, the effects on the planet, such as melting ice caps, extreme weather, drought and rising sea levels, will threaten populations and livelihoods, said the report conducted by the humanitarian organization DARA.”

As we saw in chapter five, top UK scientist Sir David King warned in 2004 that that by 2100 Antarctica could be the only habitable continent.

Tipping point rhetoric seems to have exploded beginning in 2002. An analysis by Reason magazine’s Ron Bailey found that tipping points in environmental rhetoric increased dramatically in that year…..