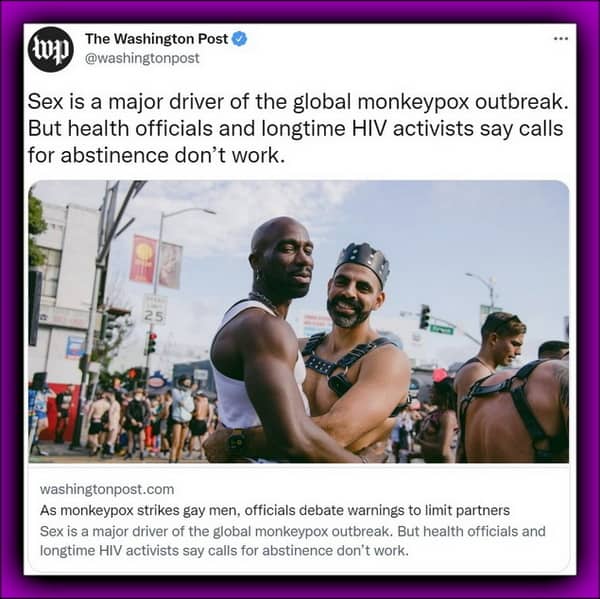 (The below is from ACE OF SPADES! | Must see TWITCHY as well)

What you can do is forbid people to stop doing non-sacred, non-holy things, things like: Going to church, going to marriage ceremonies, going to funerals, going to christenings, seeing relatives who are in the hospital or on their deathbeds, etc.

But you certainly can’t stop gays from having sex with multiple partners. That is too firmly rooted in this nation’s culture!

Plus, as they say, it just wouldn’t be effective. Gays would just ignore the your “advice.”

Thousands of gay men clad in leather, latex — and often much less — partied along Folsom Street here last weekend during the annual kink and fetish festival. Even after the city had just declared the monkeypox outbreak striking its gay community a health emergency — one day after the World Health Organization urged men to sleep with fewer men to reduce transmission — San Francisco public health officials made no attempt to rein in festivities or warn attendees to have less sex.

Public health authorities typically emphasize safer sex over abstinence to prevent the spread of diseases through intimate contact. But monkeypox is presenting new challenges in calibrating the right message to stop the rare virus from becoming endemic while limiting government intrusion into the bedroom.

I don’t remember being told to be “safer” at the gym or beach during covid.

I was told I simply was not permitted to go, and if I tried to go, I would be arrested.

During covid, the health authorities did not merely offer advice. They also sent out the police to arrest pastors that held church services. And to arrest business owners who opened their businesses. And to shutter parks and gyms with gates and chains.

And other coercive means.

But you can’t do that with gay bars and gay fetish parties.

The FBI and NIH both agree. 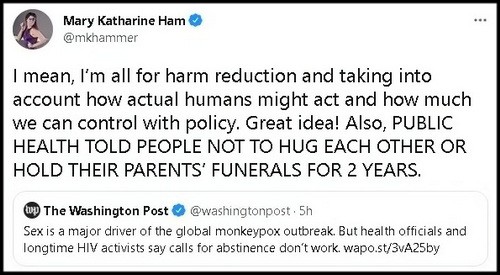 People were also fired from their jobs for not complying with The Regime’s dictates on vaccination.

But some people’s liberty is just more sacred than other people’s.

In the Empire of Lies, the truth has a selective utility:

Can I ask a serious question:

Why are no Republicans in Congress asking Rachel Walensky or Anthony Fauci about this?

Do even our representatives so care about the New York Times’ opinion of them that they won’t ask highly-relevant questions?

Why has not a single reporter at the supposedly-conservative Fox News asked these questions? 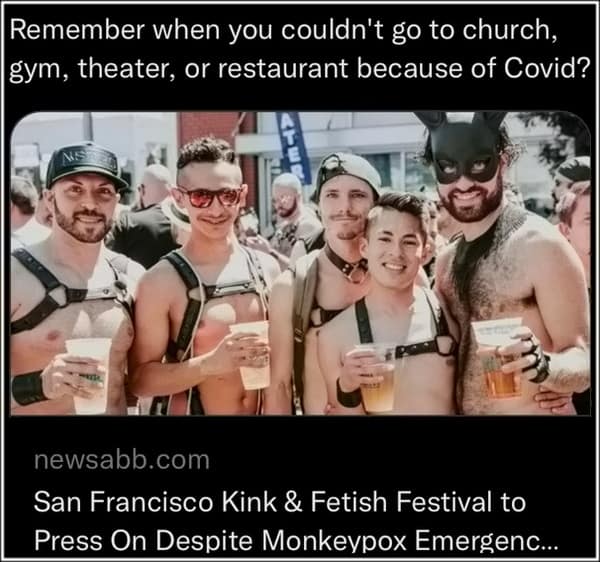