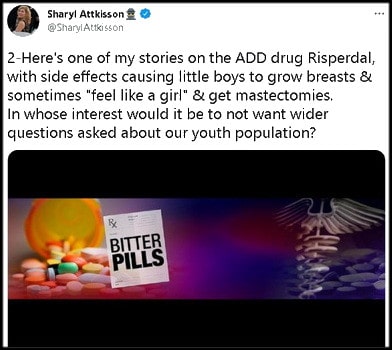 Here’s one of my stories on the ADD drug Risperdal, with side effects causing little boys to grow breasts & sometimes “feel like a girl” & get mastectomies. In whose interest would it be to not want wider questions asked about our youth population?

First order of business – “what the effe?”

The U.S. is one of the most over-prescribed countries in the world and there are millions of cases of adverse drug reactions every year. Full Measure examines one widely-prescribed pill that’s had devastating side effects for young boys. This is an older story (August 7, 2016), but found it because of Sharyl’s Tweeting it.