This comes from Media Research, and is a great point about Left-Wing violence and hatred. This will go under the tag “Crazy Dems”

….This report includes examples of over-the-top rhetoric from left-wing hosts Mike Malloy, Stephanie Miller, Randi Rhodes, Ron Reagan, Jr., Ed Schultz and Montel Williams, all of whom currently or at one time broadcast to a national audience on either the Air America network or via XM and/or Sirius satellite radio. Among the lowlights:

■ Conservatives Want to Kill Barack Obama: “I really think there are conservative broadcasters in this country who would love to see Obama taken out.” (Ed Schultz)

■ Conservatives Want You to Die: “If, in fact, the GOP doesn’t like any form of health care reform, what do we do with those 40 to 60 million uninsured?…When they show up in the emergency room, just shoot ‘em! Kill them!…Do we have enough body bags? I don’t know.” (Montel Williams)

■ Conservative Congresswoman Would Have Liked the Holocaust: “[Representative Michele Bachmann is] a hatemonger. She’s the type of person that would have gladly rounded up the Jews in Germany and shipped them off to death camps….This is an evil bitch from Hell.” (Mike Malloy)

■ Dick Cheney Eats Babies: “Cheney, by the way, looks very ruddy. I couldn’t get over that. Like, he must have feasted on a Jewish baby, or a Muslim baby. He must have sent his people out to get one and bring it back so he could drink its blood.” (Mike Malloy)

■ Rush Limbaugh Should Die: “I’m waiting for the day when I pick up the newspaper or click on the Internet and find that he’s choked to death on his own throat fat, or a great big wad of saliva or something, whatever. Go away, Limbaugh, you make me sick.” (Mike Malloy)

■ Michele Bachmann Should Die: “So, Michele, slit your wrist! Go ahead! I mean, you know, why not? I mean, if you want to — or, you know, do us all a better thing. Move that knife up about two feet. I mean, start right at the collarbone.” (Montel Williams)

If the establishment media were really interested in cleansing the airwaves of hateful rhetoric, they would not confine their criticism to conservative hosts. Instead, they would — and they must — make an equal effort to expose the nastiness that runs rampant on left-wing talk radio. Unless and until they do, they are participating in an act of journalistic hypocrisy. 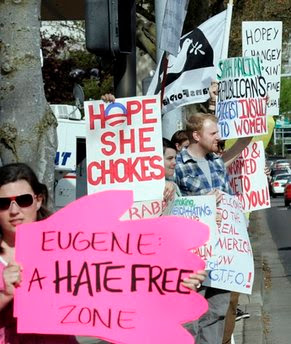