A recent CBS News poll found that 71 percent of respondents believe it is “not appropriate” to build the mosque a few blocks from Ground Zero, including a majority (57 percent) of Democrats. A Time poll found that 68 percent are following the issue “somewhat closely” or “very closely.”

“A majority of every demographic group – by party, region, age, gender, political philosophy – agrees that there is a Constitutional right to proceed,” said Siena College pollster Steven Greenberg. “Even a majority of those who oppose building the mosque agree by a margin of 51-42 percent that they have the right to build it.” 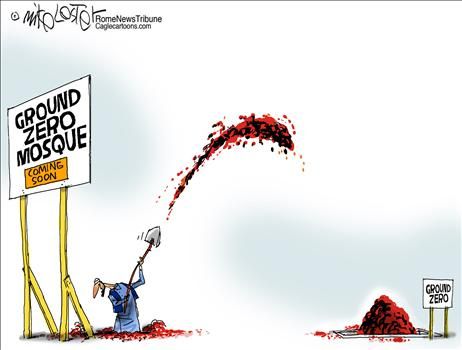 Flopping Aces posted a story (ultimately tracked to Atlas Shrugs) where hours of audio of the proposed Ground Zero Mosque Imam is showing his true colors:

The Mosque issue isn’t going away and it just got more interesting. Apparently Steve Emerson, Executive Director of The Investigative Project on Terrorism (a large storehouse of archival data and intelligence on Islamic and Middle Eastern terrorist groups), has unearthed hours of audio in which Imam Rauf sounds not so moderate after all. The audio hasn’t been released yet, nor the context, but from the sounds of it….the context won’t matter a whole lot:

Steve Emerson has unearthed 13 hours of audio tape of Imam Rauf. Emerson and his team of investigators has spent the past four weeks going through the newly found material. Rauf is a “radical extremist cleric who cloaks himself in sheep’s clothing.”

Among the shocking revelations Emerson’s team will reveal next week — they found Rauf:

Calling for the elimination of Israel by claiming a one-nation state, meaning no more Jewish State.

Steve Emerson’s Investigative Project fact checks some of the positions in this radical audio, which some are positions the radical Left take as well. Audio of Emerson on the Bill Bennett show can be found here. Steve Emerson shows how Imam Feisal Abdul Rauf may have committed a felony. This is a growing story and my position that says this will bit the Dems in the ass is coming to fruition. 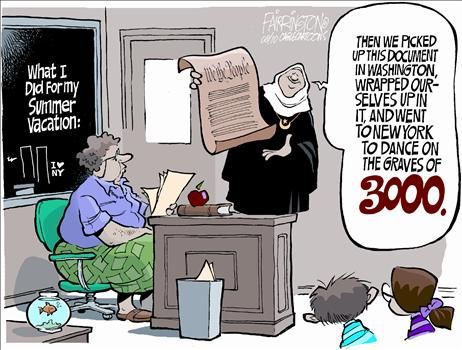 This is a Libertarian Republican h/t:

“this is like a metastasized antisemitism… It’s not even Islamophobia, it’s beyond Islamophobia. It’s hate of Muslims.”

Daisy Khan doesn’t seem to understand is that perhaps this isn’t about Muslims at all, but about Americans protecting and defending a site that is now precious to us. The malignant Narcissism of these people is astounding and so encompassing they, like the Obama admin in fact, cannot see beyond their own self-obsession. Little Daisy is loathsome–we didn’t start this, they did. We didn’t choose the location, they did. And the gall to claim opposition to the GZ mosque is “metastasized antisemitism” is the same as our own government calling Tea Party Patriots Nazis, UnAmerican, and the Mob. They’re all the same. There’s only one group of people who were mass murdered on 911 and that was Americans, not Muslims. And there has been only one group continuing to implement mass murder since then–Muslims. And there is one country that still calls for the mass extinction of Jews in the world, and it’s a Muslim country. This next story is with thanks to BigJournalism:

VELSHI: The name Cordoba- some people are associating it with Muslim rule and bloody battles, when, in fact, Cordoba was one of the finest times in relations between the major religions.

Reinhart Dozy  (1820-1883), the great Orientalist scholar and Islamophile (i.e., by any objective standard, notwithstanding Ghosh’s uncontrolled spraying of the ridiculous charge of “Islamophobia”), wrote a four-volume magnum opus (published in 1861 and translated into English by Francis Griffin Stokes in 1913), Histoire des Musselmans d’Espagne (A History of the Muslims in Spain). Pace Ghosh’s distorted reportage, here is Dozy’s historical account of the mid-8th century “conversion” of a Cordovan cathedral to a mosque:

All the churches in that city [Cordova] had been destroyed except the cathedral, dedicated to Saint Vincent, but the possession of this fane [church or temple] had been guaranteed by treaty. For several years the treaty was observed; but when the population of Cordova was increased by the arrival of Syrian Arabs [i.e., Muslims], the mosques did not provide sufficient accommodation for the newcomers, and the Syrians considered it would be well for them to adopt the plan which had been carried out at Damascus, Emesa [Homs], and other towns in their own country, of appropriating half of the cathedral and using it as a mosque. The [Muslim] Government having approved of the scheme, the Christians were compelled to hand over half of the edifice. This was clearly an act of spoliation, as well as an infraction of the treaty. Some years later, Abd-er Rahman I [i.e., the “Muslim prince” in Ghosh’s redacted narrative] requested the Christians to sell him the other half. This they firmly refused to do, pointing out that if they did so they would not possess a single place of worship. Abd-er Rahman, however, insisted, and a bargain was struck by which the Christians ceded their cathedral….

…the contemporary scholar J.M. Safran discusses an early codification of the rules of the marketplace (where Muslims and non-Muslims would be most likely to interact), written by al-Kinani (d. 901), a student of the Cordovan jurist Ibn Habib (d. 853), “…known as the scholar of Spain par excellence,” who was also one of the most ardent proponents of Maliki doctrine in Muslim Spain:

the problem arises of “the Jew or Christian who is discovered trying to belnd with the Muslims by not wearing the riqā [cloth patch, which might be required to have an emblem of an ape for a Jew, or a pig for a Christian] or zunnār [belt].” Kinani’s insistence that Jews and Christians wear the distinguishing piece of cloth or belt required of them is an instance of a legally defined sartorial differentiation being reconfirmed…His insistence may have had as much to do with concerns for ritual purity and food prohibitions as for the visible representation of social and political hierarchy, and it reinforced limits of intercommunal relations….