Do not let what Dr. Risch said get lost in the below. He said 70-to-100-thousand people could be alive today is we had treated our patients with the Hydroxychloroquine protocols other countries have followed. 70,000 to 100,000!

Dennis Prager has Dr. Harvey Risch (MD, PhD , Professor of Epidemiology, Yale School of Public Health) on his program to discuss the issue of Hydroxychloroquine (HCQ), its use, and the seemingly political fallout from the media and the Left (Democrats in Congress and Democrat governors). There is also discussion of how or why there is pressure or push-back against it’s use. I would say partly because of “TDS” (Trump Derangement Syndrome), but also BIG-PHARMA. Otherwise known as “Crony-Corporatism”. Previously Dennis discussed his earlier NEWSWEEK article.

Dennis also mentions in passing the French United Nations official, who has served as Under-Secretary-General of the United Nations, Special Adviser on Innovative Financing for Development in the UN and chairman of UNITAID — PHILIPPE DOUSTE-BLAZY. But shortly after discussing the issue Dennis asks the $64,000 question, “has the ban on HCQ led to deaths?” [adapted]… that shorter response is isolated here:

While Dr. Risch did not want to impugn motives, Robert Kennedy Jr. was not so coy:

The problem is Anthony Fauci put $500 million of our dollars into that vaccine.  He owns half the patent.  He and these five guys who are working for him were entitled to collect royalties from that.

So you have a corrupt system and now they have a vaccine that is too big to fail.  And instead of saying this was a terrible, terrible mistake, they are saying we are going to order 2 billion doses of this and you’ve got to understand Alan with these COVID vaccines these companies are playing with house money.  They’re not spending any dime, they have no liability.  Well if they kill 20 people or 200 people or 2,000 people in their clinical trials, big deal.  They have zero liability.  And guess what, they’ve wasted none of their money because we’re giving them money to play with.

….On July 23, 2020, the Association of American Physicians & Surgeons (AAPS) provided the U.S. Department of Health & Human Services and the Food and Drug Administration copious amounts of data showing, among other things, that countries using hydroxychloroquine (HCQ) are attaining far lower mortality rates than the United States. “The mortality rate from COVID-19 in countries that allow access to HCQ,” said the AAPS, “is only one-tenth the mortality rate of countries where there is interference with this medication, such as the United States.”

Did you catch that? One-tenth the mortality rate means that our country’s current death count of about 160,000 could be and perhaps should be, as low as 16,000.

Oh, but I assume you’ve been told that the AAPS is a “fringe group” of “conservative” doctors who should be discredited?

Well, aside from the fact that such a claim is a textbook example of the Socratic fallacy of an ad hominem attack, i.e., “shooting the messenger rather than attending to the message,” there’s more, lots more.

First, there’s the Henry Ford Health System in Michigan, which recently published a study involving thousands of patients where HCQ proved to be both very safe and highly effective in treating COVID-19. This study reports reducing mortality by 50%. Did you catch that? Fifty percent.

Then, there’s the Palmer Foundation report published last week highlighting the Indian slum of Dharavi. This is Asia’s biggest and densest slum, housing more than a million people. In the early days of the pandemic, Dharavi suffered a cluster outbreak. Doctors report containing it by using proactive measures, “including the use of hydroxychloroquine for prophylaxis (preventive) treatment.” As a result, Dharavi’s COVID-19 infection rate dropped drastically from April through June, and in July, new infections were very low, almost reaching zero on July 9.”

Still the stuff of right-wing nut jobs, you smirk?

Well, there is Harvey, A. Risch, MD, Ph.D., professor of epidemiology at Yale School of Public Health (generally not known as a bastion of conservative political thought), who recently wrote in Newsweek magazine: “I am … flummoxed to find that, in the midst of a crisis, I am fighting for a treatment that the data fully support but which, for reasons having nothing to do with a correct understanding of the science, has been pushed to the sidelines. As a result, tens of thousands of patients with COVID-19 are dying unnecessarily.” …..

(WT goes on to note some of the studies)

AGAIN, besides the studies Dr. Risch mentions (12), the total worldwide that shows benefite to using Plaquinel are 68 studies (41 peer reviewed). One of the better posts on this topic comes from REAL CLIMATE SCIENCE — of which some of these graphs are from or updated from the MAIN SITE tallying all this: 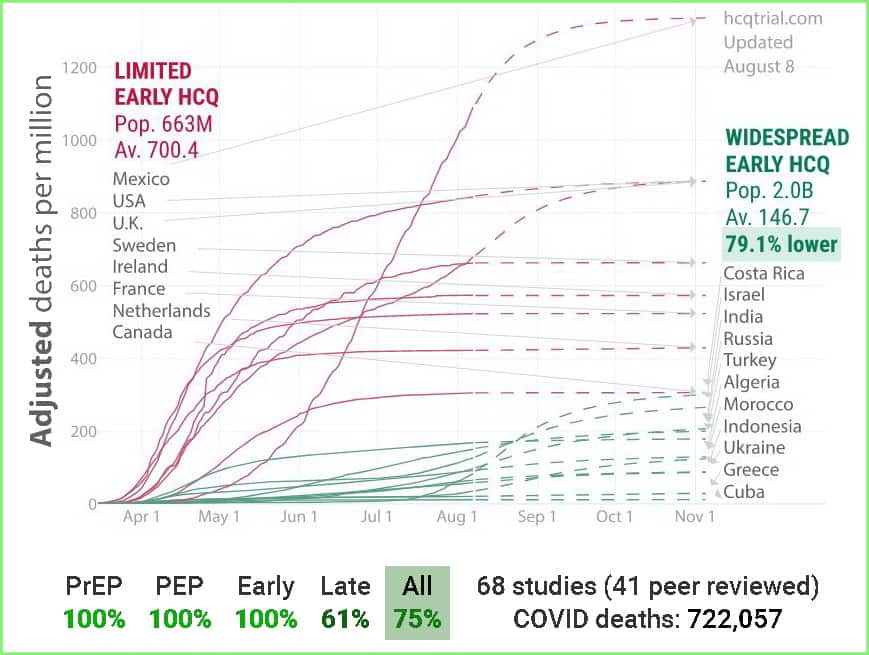 Okay, I just want to say that we have heard many media types and Democrat Lefties say that by the President touting Hydroxychloroquine he is killing people. My first example comes from Neil Cavuto:

Fox News host Neil Cavuto warned viewers that hydroxychloroquine “will kill you” after Donald Trump’s surprise announcement that he was taking the unproven drug to prevent Covid-19 infection.

Mr Cavuto, who appeared stunned at the US president’s decision, said he was not making a “political point, but a life-and-death point”.

“If you are in a risky population here, and you are taking this as a preventative treatment … it will kill you. I cannot stress enough. This will kill you,” said the Fox News host…..

But all this is based on a Lancent study published May 22nd (that media heads caught wind of a couple days early)… the only problem? The entire study was faked — here is a fair dealing with it via MEDCRAM. (A previous post where the known issues with “peer review” is noted: Peer-Review Issues | Sharyl Attkinsson). Here is the indomitable Press Secretary tearing shit up:

So the above and below “concern” about a drug many-many millions of people have taken for decades, safely, ALL OF A SUDDEN is a health emergency. I wonder why? (I refer you to the already posted Washington Times article title above.) The “blood on the hands” argument is really more apt in the 70-100-thousand lives that very possibly could have been saved had our country done what other countries had… save the MSM Derangement with Trump.

Here is some more examples of what I am saying:

(Decent montage) The discredited and subsequently retracted hydroxychloroquine study had hardly appeared in Lancet magazine before CNN pounced on it with great eagerness to try to prove President Donald Trump wrong. This is yet another of their horribly WRONG reports on this treatment which on July 3 was contradicted by a Henry Ford Health System study which showed that hydroxychloroquine significantly reduced mortality among COVID-19 patients. Once again, CNN WRONG and Trump RIGHT!

CNN medical correspondent Elizabeth Cohen explained that although other studies exposed the potential dangers linked to the drug, the Lancet’s is much larger.

“This new one looks at 671 hospitals over six continents. The one before was looking at 25 hospitals,” Cohen said. “This is a very, very large study. And what they found was increased risk of death and increased risk of heart issues. Now, these were hospitalized patients, some quite ill.”

She reiterated Trump’s claim that these studies look at sick people taking the drug, while he is healthy and taking it as a preventative measure, but questioned that if hydroxychloroquine has any positive effect at all if does not help the infected.

They then played a clip of the president’s “reckless” promotion of the drug, during which he calls hydroxychloroquine “a gift from heaven” but admits he is not a doctor.

“Increasingly, this study gives the impression that this president was extending false hope to people and he has gotten negative judgment from the American people for his handling of coronavirus, this is not going to make that any better,” CNN White House correspondent John Harwood added after the clip aired…..

This comes by way of THE TENNESSEE STAR:

Metro Nashville At-Large Council Member Sharon Hurt said Wednesday during a virtual meeting of the Joint Public Safety and Health Committee that there should be stronger legislation for those not wearing masks and suggested they be charged with murder or attempted murder.

Hurt said that she works for an organization that, “If they pass the virus, then they are tried for murder or attempted murder.”

Hurt thinks the same standard should apply to the general public.

“This person who may very well pass this virus that’s out in the air because they’re not wearing a mask is basically doing the same thing to someone who contracts it and dies from it,” she said.

“Maybe there needs to be stronger legislation to say that if you do not wear a mask, and you subject exposure of this virus to someone else then there will be some stronger penalty as it is in other viruses that are exposed,” the council member added…..