JUMP TO AUSTRALIA – not by boat

Listen, as Lester Holt and Pete Williams describe how the “terror threat advisory” isn’t based on any actual threats or plots, but just a lot of “anti-government rhetoric” that includes things like “opposition to COVID measures” like masks and vaccine measures.

MUST WATCH: Homeland Security hasn’t based the new “Terror Threat Alert” off of actual threats or plots… just “anti-government rhetoric” that includes “opposition to COVID measures” … aka FREE SPEECH.

“Extremists may seek to exploit the emergence of Covid-19 variants by viewing the potential re-establishment of public health restrictions across the United States as a rationale to conduct attacks,” the DHS advisory said, adding that “pandemic-related stressors… may contribute to more violence this year.”

So, if there aren’t any actual plots or threats, what they’re really doing is demonizing free speech, as Tim Young observes, or criticism of government action. That’s a dangerous route to go down. It also suggests that the DHS is surveilling people to some degree on this subject, another troubling thought, and definitely a slippery slope to go down.

They’re also continuing to demonize Trump supporters again, by including them in the advisory that isn’t based on any actual threats, with “claims of election fraud, belief Trump can be reinstated.”

Whether you agree or disagree with those thoughts on Trump or on COVID, you’re allowed those thoughts in our allegedly free society under our Constitution. Are they really classifying being critical of the government as a terrorist threat now? Is dissent now terrorism?

Notice in this CNN take that it isn’t criminal actions but “false narratives” that are mentioned as “dangerous.”

The bulletin is part of a concerted effort by DHS to address the issues that led up to January 6 and the beginning of an effort by the department to educate the public about how these false narratives and conspiracy theories “are not just confusing but dangerous,” according to a source familiar.

You’re not allowed to have those thoughts.

Then the NBC piece notes there are concerns about the 9/11 anniversary and “religious holidays,” without defining what “religious holidays” we’re talking about here. What they’re looking at here, without NBC saying it, I think, is radical Islamic terrorism. That’s what the Yahoo News article on the advisory suggests.

But NBC just didn’t want to put that in the graphic. So, it leaves you wondering: are religious holidays now considered a threat as well?……… 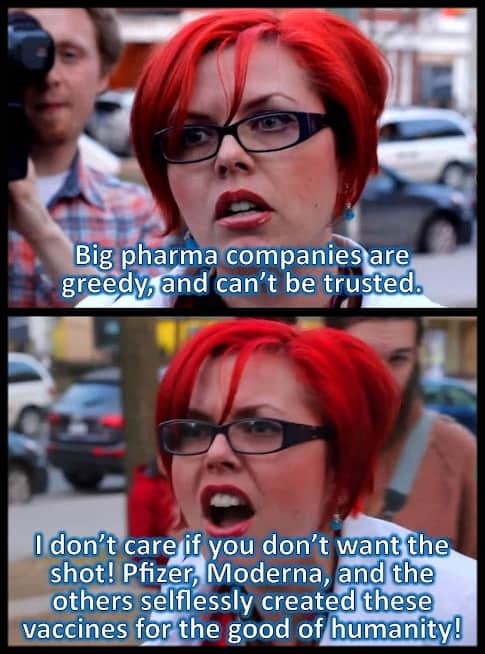 ACE of SPADES has a post that got my attention. I will add more of the source as I see fit… but this is an amazing turn. And I doubt they mean the person[s] given awards in Obama’s church or celebrated on the front cover of his church’s magazine (that has a 20,000 person reach).

As the Taliban move in for the kill in Afghanistan, we once again turn away from the hard questions about how to sustain American pride in the face of people who abhor us and what American values mean if the world meets our ideals with contempt. One answer to these questions is a counsel of capitulation. Let us admit that we are now and always have been a rotten nation made up of hateful, conniving people who only pretended to be good.

That answer has always had a few cynics in its corner, but it has become the presiding doctrine of the American left, a development which is itself one of the defining consequences of 9/11. At some point in the months following the attack, as the momentary sense of national unity cleared, the left began to adopt the ‘we-deserved-it’ narrative. Not everyone was as outspoken as Ward Churchill who called the office workers in the World Trade Towers ‘little Eichmanns’ or the Revd Jeremiah Wright who preached a sermon shortly after 9/11 that said of the attack, ‘America’s chickens are coming home to roost’. But in a quieter way, these ideas took hold. President Bush’s wars in Afghanistan and Iraq crystalized the left’s narrative that America’s bellicosity was the problem. We had more to fear from domestic mistreatment of innocent Muslims than we had from Muslims bent on mass murder.

This muddled view has birthed a generation that has nothing but misgivings about American virtue and American power. And it lies in the background of a brand new attempt to sacralize a new date: January 6, 2021.

THEN CAME THIS: (MORE ADDED AFTER AOS’S EXCERPT) 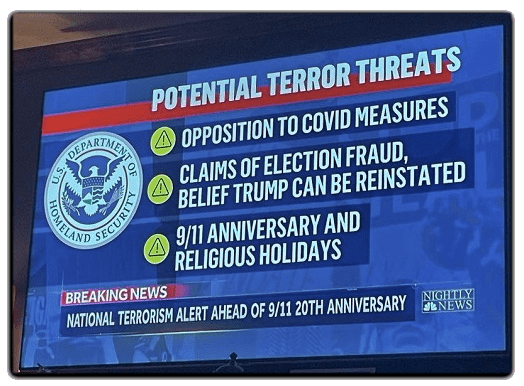 There are some details at the link above.

At least if you believe the government’s public statements, our intelligence agencies and military totally missed the Taliban’s plans to rapidly take over Afghanistan (along with all that sophisticated military equipment we failed to remove). But they are certainly right about the threats above, don’t you think?

Peter Wood doesn’t think so. He is writing a book.

It was apparently the 500th anniversary of the fall of the Aztecs yesterday. You may recall that the Ethnic Studies folks in California want to revive the Aztec gods to replace the white Christian God, but as woke gods – not as true Aztec gods.

Don’t let them take over your life. Their ideology is not sustainable.

Here is the important Tweets linked in the above by JAMES LINDSAY: 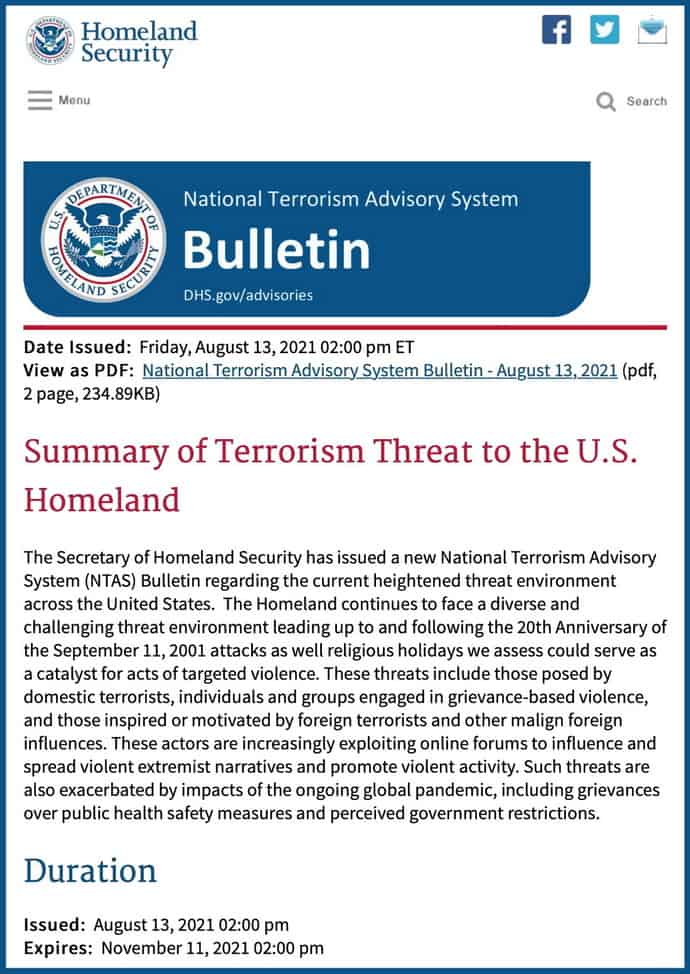 The POST MILLENNIAL notes a recent Joy Reid show, where, Republicans are referred to as terrorists:

In an interview on The Reidout with Joy Reid this week, author Malcom Nance warned that Q-Anon supporters have taken over the Republican Party and are “preparing for civil war.”

“On August 13th or 14th, just a few days from now, the Q-Anon believers, which is now a substantial portion of the Republican base, believe that Donald Trump will be reinstated as president through some magic that they only understand. When that doesn’t happen, then what?” Reid asked.

“Well, nothing is going to happen here in August,” replied Nance, adding that there is a substantial portion of the “gunslinging conservatives base” that does not support Q-Anon.

“The Republican Party, you know, I used to joke that they were vanilla ISIS, all of these militia men and everything out there. They were like ISIS, they were like Al Qaeda in the sense that they radicalized online. They would meet together in secret, and they did all of these activities, which were very much like a terrorist insurgency,” said Nance.

CANARY IN THE COAL MINE

* While I like their rants (Paul Watson, Mark Dice, and others) and these commentaries hold much truth in them, I do wish to caution you… he is part of Info Wars/Prison Planet and Summit News network of yahoos, a crazy conspiracy arm of Alex Jones shite. Also, I bet if I talked to him he would reveal some pretty-crazy conspiratorial beliefs that would naturally undermine and be at-odds-with some of his rants. Just to be clear, I do not endorse these people or orgs.