Shoebat (<< lots of good material to read at link) notes the verse pictured above as reading thus:

Against them make ready your strength to the utmost of your power, including steeds of war, to strike terror into (the hearts of) the enemies, of Allah and your enemies, and others besides, whom ye may not know, but whom Allah doth know. Whatever ye shall spend in the cause of Allah, shall be repaid unto you, and ye shall not be treated unjustly.

(An editors note, in the lower right corner of the above picture FaceBook suggested Ismaaiyl Abdullah Binsley “like” Bill Warner’s page. If Ismaaiyl too Dr. Warner’s words to heart he wouldn’t have been in a death cult.)

The sad news today from New York is that two families and all the friends and NYPD co-workers lost two of their own. “They were quite simply assassinated, targeted for their uniforms, and for the responsibility they embraced to keep the people of this city safe,” Police Commissioner Bill Bratton said at a news conference on the deaths of Officers Wenjian Liu and Rafael Ramos. On a left-leaning cartoonists tribute to a police officer back in September, I said this:

The “victim-hood” mentality imposed on people in the liberal trinity (race, class, gender) will be coming home to roost. From the left saying that Chris Matthews has a “white privileged” aspect to him as a person will grow until even the monster the left has created will turn on them.

I only see support from the legacy media in times like these, when they are dead or severely wounded, not when they have an almost 300-pound, 6’4″ [stoned] giant pounding a cops face. Rather the media has it in em’ to create an almost mob-like mentality then cry foul when they also get bitch slapped and have camera stolen. 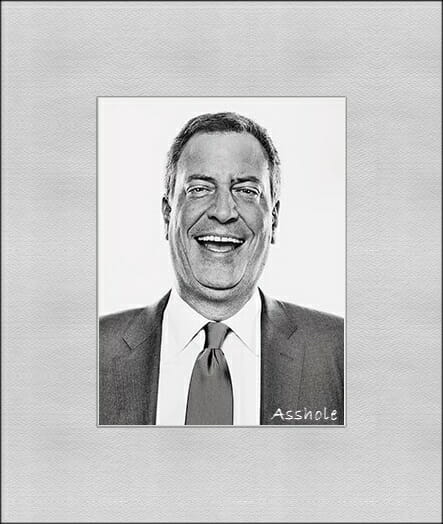 The NYPD turned their backs (rightly so) on the Mayor as he walked into the Woodhull Hospital:

The Mayor and Race Hustlers To Blame

As the mayor and his entourage snaked through a jammed third-floor corridor at Woodhull Hospital, where two officers had been pronounced dead just hours earlier, scores of grieving cops faced the walls — and away from the leader they believe has failed them.

Earlier, de Blasio approached a cluster of cops at the Brooklyn Hospital and offered, “We’re all in this together.”

“No we’re not,” an officer replied tersely, according to a cop who witnessed the icy scene.

The rank-and-file’s anger at the mayor was palpable citywide.

“It’s f–king open season on us right now,” one officer said. “When is he going to step up?”

The Patrolmen’s Benevolent Association circulated a message that fumed, “The mayor’s hands are literally dripping with our blood.”

Just last week, cops began signing a “Don’t Insult My Sacrifice” waiver, distributed by the PBA, that warned the mayor and speaker to stay away from funerals of cops killed in the line of duty.

It is not known if the officers slain Saturday had signed the waiver. which singles out de Blasio and Council Speaker Melissa Mark-Viverito for their “consistent refusal to show police officers the support and respect they deserve.”

Many cops said they blame deBlasio for helping to create a climate of distrust in cops that has turned them into targets.

They pointed to Hizzoner just last week calling an assault by Brooklyn Bridgeprotesters on two NYPD lieutenants an ­“alleged” assault, even as dramatic video of the attack emerged.

De Blasio revealed in an ABC News interview earlier this month that he and First Lady Chirlane McCray had instructed their biracial son, Dante, about the “dangers” that police pose….

On the 12th of December Mew York police officers made it clear that Mayor de Blasio is NOT welcome at their funerals. Unfortunately that was a bit prophetic. The FBI sent out a warning about a black supremacist prison gang, Black Gurilla Family (BGF) that has taken it upon themselves to kill police officers. Ismaaiyl Abdulah Brinsley, 28, “shot two cops dead as they sat in a patrol car in Bedford-Stuyvesant to avenge the deaths of Michael Brown and Eric Garner. He also shot his former girlfriend at her home in the Baltimore area on Saturday morning, police said. Law enforcement sources said the NYPD has dispatched investigators to Baltimore to probe Brinsley’s past and suspected involvement with the Black Guerrilla Family prison gang.”

The Federal Bureau of Investigations field office in Baltimore, Maryland issued a warning Friday that the Black Guerilla Family prison was plotting to attack white police officers in the state.

The Baltimore Sun included the report of the threat in an article on the Maryland ties to the execution of two police officers, Rafael Ramos and Wenjian Liu, in New York City Saturday afternoon by Ismaaiyl Abdulah Brinsley.

Brinsley reportedly shot his girlfriend early Saturday morning in the Baltimore suburb of Owings Mills before he headed to New York. Neither of the slain New York officers was white.

Apparently the Sun has the exclusive on the threat, but buried it in the middle of the lengthy article. The Baltimore FBI has not released the information to the public.

“On Friday, the Baltimore FBI office issued a memo that the Black Guerrilla Family gang was targeting “white cops” in Maryland, an agency spokeswoman confirmed. The memo, circulating among officers, said a contact who had given reliable information in the past said members of the gang — connected to the high-profile corruption scandal at the Baltimore City Detention Center — were planning to target white officers to “send a message.”

“A federal law enforcement official said Brinsley had no known ties to the BGF.”

Earlier this month the New York Daily News reported the BGF was plotting to attack New York City police officers. The threat was soon allegedly deemed not credible by the NYPD….