(WIKI) Amen (Hebrew: אָמֵן, ‘ʾāmēn’; Greek: ἀμήν, ‘amín’; Arabic: آمین, ‘āmīna’; Aramaic/Syriac: ܐܵܡܝܼܢ, ‘ʾāmīn’) is an Abrahamic declaration of affirmation first found in the Hebrew Bible, and subsequently in the New Testament. It is used in Jewish, Christian and Islamic worship, as a concluding word, or as a response to a prayer. Common English translations of the word amen include “verily”, “truly”, and “so be it”. It is also used colloquially, to express strong agreement.

The usage of amen, meaning “so be it” (as found in the early scriptures of the Bible), is a word of Biblical Hebrew origin. The word originated in the Hebrew Scriptures, as a confirmatory response; it is found in Deuteronomy as a confirmatory response made by the people. Moreover, in the Books of Chronicles (16:36), it is indicated that around 1000 BC, the word was used in its religious sense, with the people responding “Amen” upon hearing the blessing, “Blessed be the Lord God of Israel from now and unto all eternity”. The basic triconsonantal root from which the word is derived, is common to a number of languages in the Semitic branch of the Afroasiatic languages, including biblical Aramaic. The word was imported into the Greek from the Judaism of the early Church. From Greek, amen entered the other Western languages. According to a standard dictionary etymology, amen passed from Greek into Late Latin, and thence into English. Rabbinic scholars from medieval France believed the standard Hebrew word for faith emuna comes from the root amen. Although in English transliteration they look different, they are both from the root aleph-mem-nun. That is, the Hebrew word amen derives from the same ancient triliteral Hebrew root as does the verb ʾāmán.

Grammarians frequently list ʾāmán under its three consonants (aleph-mem-nun), which are identical to those of ʾāmēn (note that the Hebrew letter א aleph represents a glottal stop sound, which functions as a consonant in the morphology of Hebrew). This triliteral root means to be firm, confirmed, reliable, faithful, have faith, believe.

Charlotte, NC — To open each Congressional session, a prayer is said. At the start of a new Congress, a prayer is said for that specific Congress. This year, the prayer was said, but it was a complete slap in the face to our founding fathers and our nation’s history.

Rep. Emanuel Cleaver (D-Mo) opened the session in prayer. Cleaver was a United Methodist Pastor and the prayer did not deviate far from normal until he was near the end of his prayer.

Cleaver said he was praying to the monotheistic God, Brahma the Hindu god, and God known by many different names by many different faiths. It’s a significant departure for a nation that was founded on Judeo-Christian faith. But that’s not all.

To conclude his prayer, Cleaver apparently thought he was going to pray gender-neutral and said the words Amen and a woman. You can see his comments below and the Washington Examiner does a great job sharing that the word amen is not a reference to masculinity, but rather a word that translates “so be it.”…..

….The first explanation for the bizarre expansion of “amen” to “amen and a woman” could be that Rep. Cleaver is simply guilty of appalling ignorance. However, given that Cleaver served as the pastor of St. James United Methodist Church in Kansas City, Missouri, from 1972 to 2009, it seems difficult to believe that such a statement can be chalked up to irreligious stupidity. Surely, after almost 40 years in the profession, Cleaver would know that “amen” doesn’t mean “a man?”

Then, what is to blame? The answer, quite obviously, is the absurd gender politics which have taken root at the heart of progressivism. After all, House Speaker Nancy Pelosi has “proposed eliminating references to gender and establishing an Office of Diversity and Inclusion in the House.” Like Pelosi’s actions, could Cleaver’s laughable inclusion of “a woman” be another example of a pre-radical Democrat trying to survive in this new radical world?

Regardless of whether or not Cleaver is a true believer, what should cause further concern for conservatives — beyond the inaccuracy of Cleaver’s redefinition or his blatant pandering — is that his prayer demonstrates how nothing is safe when it comes to the new and fluid demands of the radical Left.

Long gone are the days of “Chairperson” replacing “Chairman” or “Chairwoman.” Similarly, long gone are the days of meaningless linguistic inventions such as “Latinx” or “womxn.” The radical Left’s lust for cultural dominance is never satisfied, and their appetite has been forced to grow more refined as their targets become harder to identify.

The scary part is not the absurdity of the radical Left or their fundamental premises — these have always been nonsensical — but the continued enthusiasm of those held hostage, forced to bow to their ever-changing demands. Even a pastor, an apparently religious man who presumably respects the words and meaning of scripture, is happy to bastardize language in order to survive another day.

It is this detail which should remind conservatives that the battle for language is more important than ever before. This “prayer” represents far more than ignorance or meaningless pandering. It shows that even religion — the one last entity which transcends the power of “the state” — has fallen into the cross-hairs of a radical Left who hope to dominate our language in their quest for power.

It’s not enough that we laugh at the absurdity of “amen and a woman.” It’s time we realized that the cultural battle is being fought on yet another front.

This sparked some responses

What kind of a woke moron ends a prayer with “amen and awoman”? Amen is Latin for “so be it.” … ohhh… a Democrat.

Cleaver ended his prayer to open up the 117th Congress on Sunday with the words “amen and awoman.”

Video of the prayer’s ending was posted to Twitter by Republican Pennsylvania Rep. Guy Reschenthaler, who pointed out that the word “amen” is Latin for “so be it.” 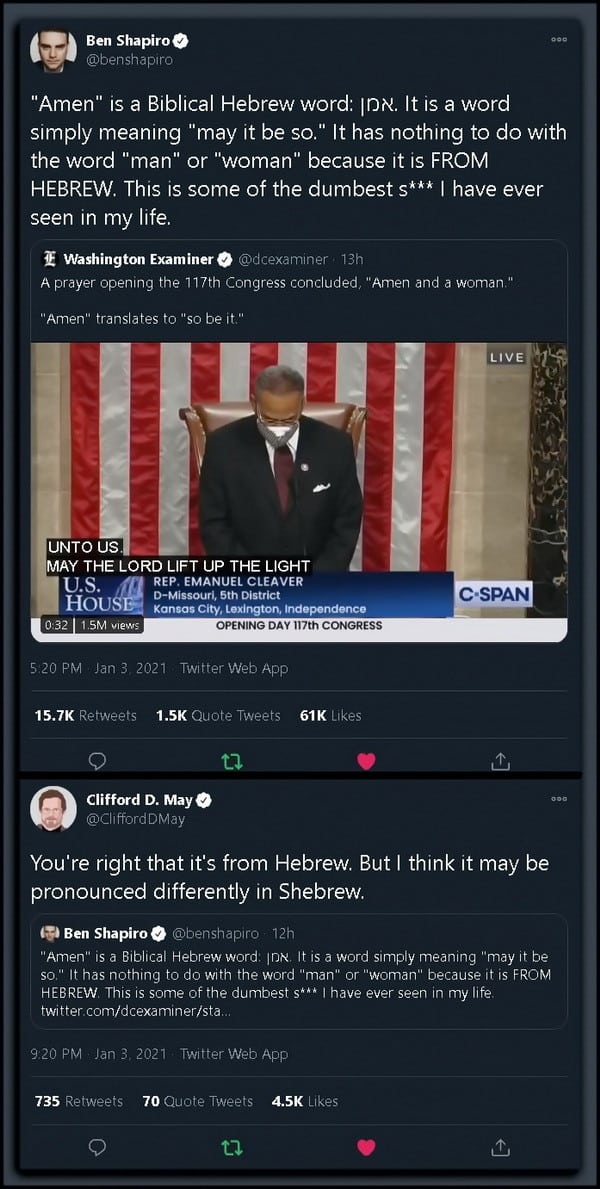 THE O.T. via JERRY ADAMS 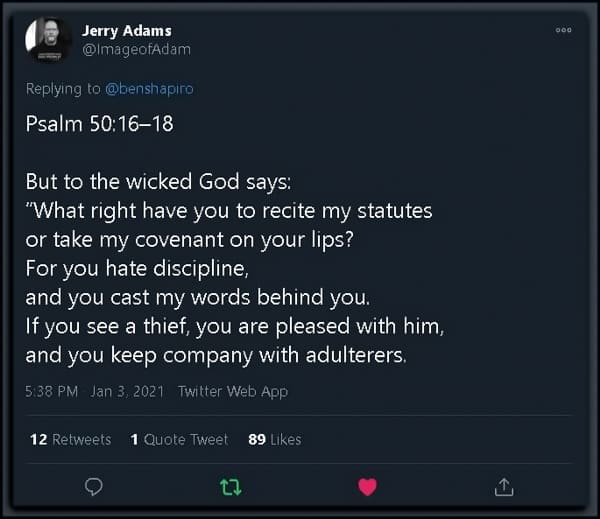