The following is from the voluminousness collecting of CLIMATE DEPOT, saved here for use as DEPOT’S front-page often changes to refute the latest scare. Enjoy yhe many links and info below… there is a video at the bottom of Marc Morano discussing the issue PRIOR to the G7.

AMAZON IS NOT THE ‘LUNGS OF THE EARTH’ SAY SCIENTISTS (NEWSMAX):

Some experts say claims that the Amazon fires are burning “Earth’s lungs” and threatening the planet’s oxygen supply are false, reports Fox News.

The assertion has caught traction as celebrities, environmentalists and political leaders have blamed Brazilian President Jair Bolsonaro for destroying the world’s largest rainforest, which they say is the “lungs of the world.”

“The Amazon produces a lot of oxygen but it uses the same amount of oxygen through respiration so it’s a wash,” he said.

“Forest plants produce lots of oxygen, and forest microbes consume a lot of oxygen. As a result, net production of oxygen by forests — and indeed, all land plants — is very close to zero,” Denning wrote Tuesday in a SCIENTIFIC AMERICAN essay….

The resurgence of forest clearing in the Amazon, which had decreased more than 80% following a peak in 2004, is alarming for many reasons. Tropical forests harbor many species of plants and animals found nowhere else. They are important refuges for indigenous people, and contain enormous stores of carbon as wood and other organic matter that would otherwise contribute to the climate crisis.

Some media accounts have suggested that fires in the Amazon also threaten the atmospheric oxygen that we breathe. French President Emmanuel Macron tweeted on Aug. 22 that “the Amazon rain forest—the lungs which produces 20% of our planet’s oxygen—is on fire.”

The oft-repeated claim that the Amazon rainforest produces 20% of our planet’s oxygen is based on a misunderstanding. In fact nearly all of Earth’s breathable oxygen originated in the oceans, and there is enough of it to last for millions of years. There are many reasons to be appalled by this year’s Amazon fires, but depleting Earth’s oxygen supply is not one of them.

As an atmospheric scientist, much of my work focuses on exchanges of various gases between Earth’s surface and the atmosphere. Many elements, including oxygen, constantly cycle between land-based ecosystems, the oceans and the atmosphere in ways that can be measured and quantified.

Nearly all free oxygen in the air is produced by plants through photosynthesis. About one-third of land photosynthesis occurs in tropical forests, the largest of which is located in the Amazon Basin.

But virtually all of the oxygen produced by photosynthesis each year is consumed by living organisms and fires. Trees constantly shed dead leaves, twigs, roots and other litter, which feeds a rich ecosystem of organisms, mostly insects and microbes. The microbes consume oxygen in that process.

Forest plants produce lots of oxygen, and forest microbes consume a lot of oxygen. As a result, net production of oxygen by forests—and indeed, all land plants—is very close to zero.

Even though plant photosynthesis is ultimately responsible for breathable oxygen, only a vanishingly tiny fraction of that plant growth actually adds to the store of oxygen in the air. Even if all organic matter on Earth were burned at once, less than 1% of the world’s oxygen would be consumed.

In sum, Brazil’s reversal on protecting the Amazon does not meaningfully threaten atmospheric oxygen. Even a huge increase in forest fires would produce changes in oxygen that are difficult to measure.

“Since NASA satellites program MODIS began collecting measurements there has been a decrease in the total number of square kilometers burned each year. Between 2003 and 2019, that number has dropped by roughly 25 percent.” –NASA Earth Observatory, August 2019

“News reports about the Amazon fires strike a fear that one of the last great forests is disappearing.  That’s completely untrue. Forests are making a comeback! More precisely, the tree cover of the planet is increasing.  Since 1982, a recent peer-reviewed paper in Nature suggests, the planet’s tree cover increased by 2.24 million km2 (an increase of roughly 7%).”  –Vincent Geloso, American Institute for Economic Research, 26 August 2019

YOU HAVE BEEN AMAZON.CONNED – NASA: AMAZON RAINFOREST BURNING AT ‘BELOW AVERAGE’ RATES, WORST SINCE 2010 – FIRES MOSTLY FARMS, NOT FORESTS – BOLIVIA’S ‘SOCIALIST’ WILDFIRES IGNORED

NASA: Amazon Is Burning At ‘Below Average’ Rates

Update: NASA: Uptick in Amazon Fire Activity in 2019 – August 19, 2019: “With the fire season in the Amazon approaching its midpoint, scientists using NASA satellites to track fire activity have confirmed an increase in the number and intensity of fires in the Brazilian Amazon in 2019, making it the most active fire year in that region since 2010.”

Wash Post shoddy Amazon fire reporting: Resorts to anecdotal ‘memories’ instead of actual scientific data: ‘I cannot remember any other big fire’ & the highest ‘I have ever seen’

The fires are mainly in agricultural areas as farmers prepare their land for planting. The land was cleared in the past.

An informative article and very informative map by NYT on Amazon fires. Map shows that fires in previously cleared land. Nothing new. Furore is yet another fraud by enviro activists. TWITTER PIC 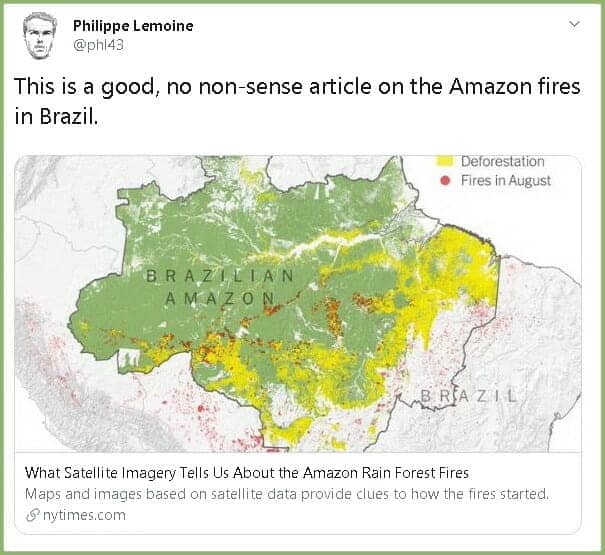 So why are there so many fires? “Natural fires in the Amazon are rare, and the majority of these fires were set by farmers preparing Amazon-adjacent farmland for next year’s crops and pasture,” soberly explains The New York Times. “Much of the land that is burning was not old-growth rain forest, but land that had already been cleared of trees and set for agricultural use.”

It is routine for farmers and ranchers in tropical areas burn their fields to control pests and weeds and to encourage new growth in pastures. What about deforestation trends?  Since the right-wing nationalist Jair Bolsonaro became Brazil’s president, rainforest deforestation rates have increased a bit, but they are still way below their earlier highs: 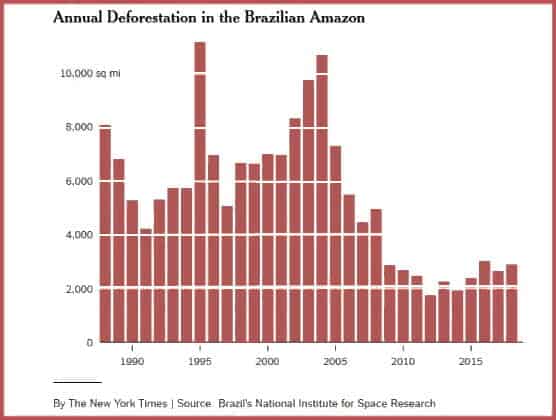 ENVIRONMENTALIST SHELLENBERGER: WHY EVERYTHING THEY SAY ABOUT THE AMAZON, INCLUDING THAT IT’S THE ‘LUNGS OF THE WORLD,’ IS WRONG 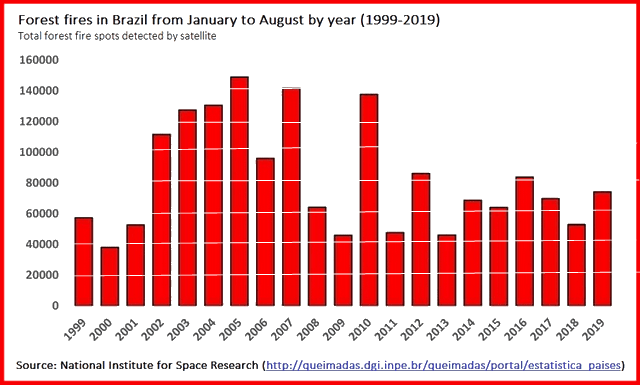 Marc Morano: “The Brazilian president has been labeled a ‘climate denier’ by the media, thus he must be stopped. The Amazon fires are being used to crush Bolsonaro politically and vilify him. The fires in Bolivia are being ignored by the media because Bolivia’s government is socialist and does not fit the narrative of evil ‘right-wing,’” Mr. Morano said. “Bolivia is protected from media criticism because they are the politically correct political leaders.” …

Climate scientist Roy Spencer had another term for the fires: “normal agriculture.” I think the media focus on this is misplaced and exaggerated, as is virtually every weather-related story that appears these days,” said Mr. Spencer, a former NASA scientist who does consulting on global crop-market forecasting.“The driest years in Brazil will have the most fires set by farmers,” the professor at the University of Alabama at Huntsville said in an email. “That isn’t a climate story, it’s normal agriculture in a country where 50 million people living in poverty are trying to survive.” …

Environmentalist Mike Shellenberger: “The photos you saw weren’t of today’s fires in Brazil – Amazon isn’t the “lungs of the world” – Deforestation is 75% below 2004 peak – *Forest* fires not increasing – Fires 7% more than decadal ave. – Here’s why everything they say about the Amazon is wrong https://t.co/dQIIwv5DRq

The incidence of fire was higher from 2003 to 2007 and in 2010, during the administration of former Brazil President Luiz Inacio Lula da Silva, a member of the Workers’ Party, although he received little in the way of an international backlash.

WASH POST SHODDY AMAZON FIRE REPORTING: RESORTS TO ANECDOTAL ‘MEMORIES’ INSTEAD OF ACTUAL SCIENTIFIC DATA: ‘I CANNOT REMEMBER ANY OTHER BIG FIRE’ & THE HIGHEST ‘I HAVE EVER SEEN’

WaPo Key Excerpts: “I cannot remember any other big fire episode like this one,” said Vitor Gomes, an environmental scientist at the Federal University of Para.

…Ricardo Mello, head of the World Wide Fund for Nature’s Amazon program, struggled to find the words to describe his pessimism on Thursday.

“It’s historically — this is highest number [of fires] I’ve ever seen,” he said.

Climate Depot Note: You don’t have to  “have seen or “remember” past fires based on one or two peoples limited memory and exposure. We have actual scientific data to show us what is happening and the data does not support these false “memories” that the Post cites twice in their feature article.

“The left is doing its level best to blame Brazil’s bush fires on Brazil’s conservative, Trump-like president, Jair Bolsonaro, and get him thrown out of office…Socialist President Evo Morales has openly encouraged what’s known, at least in Venezuela, as “conuco” agriculture, telling subsistance farmers it’s fine to set of fires to gather charcoal to sell for fuel or clear the land of brush for planting, and now he’s refusing international firefighting help.”

“Now Bolivia is robbing them of their rimshot argument. No more Sting and the rainforest man for their “narrative” now. What appears to be a far more desperate and mismanaged situation is going on Bolivia, and we don’t see any eurochicken clucking about the “lungs of the world” or sanctioning the socialist hellhole. The European Union and much of the G-7 are focused exclusively on Brazil and putting the screws to Bolsonaro blaming him for a broader temporary weather phenomenon. It’s starting to look political and it would be a welcome thing if President Trump sticks up for the man among the clucker. Bolivia makes their hypocrisy show.”