Larry Elder goes through the lies of the media and Democrats saying Trump called the Coronavirus a hoax. Democrat politicians and the Media (and some #NeverTrumpers) continue to spread this untruth, like they did the Charlottesville Lie and the lie that Trump made fun of a man’s handicap. The other DOUBLE-STANDARD by the media is that they themselves called the Coronavirus the Chinese Virus or Wuhan Virus themselves. When the “Bad Orange Man” used it they switched gears and said it was racist.

Here are some posts I think are worthy to compliment the audio: 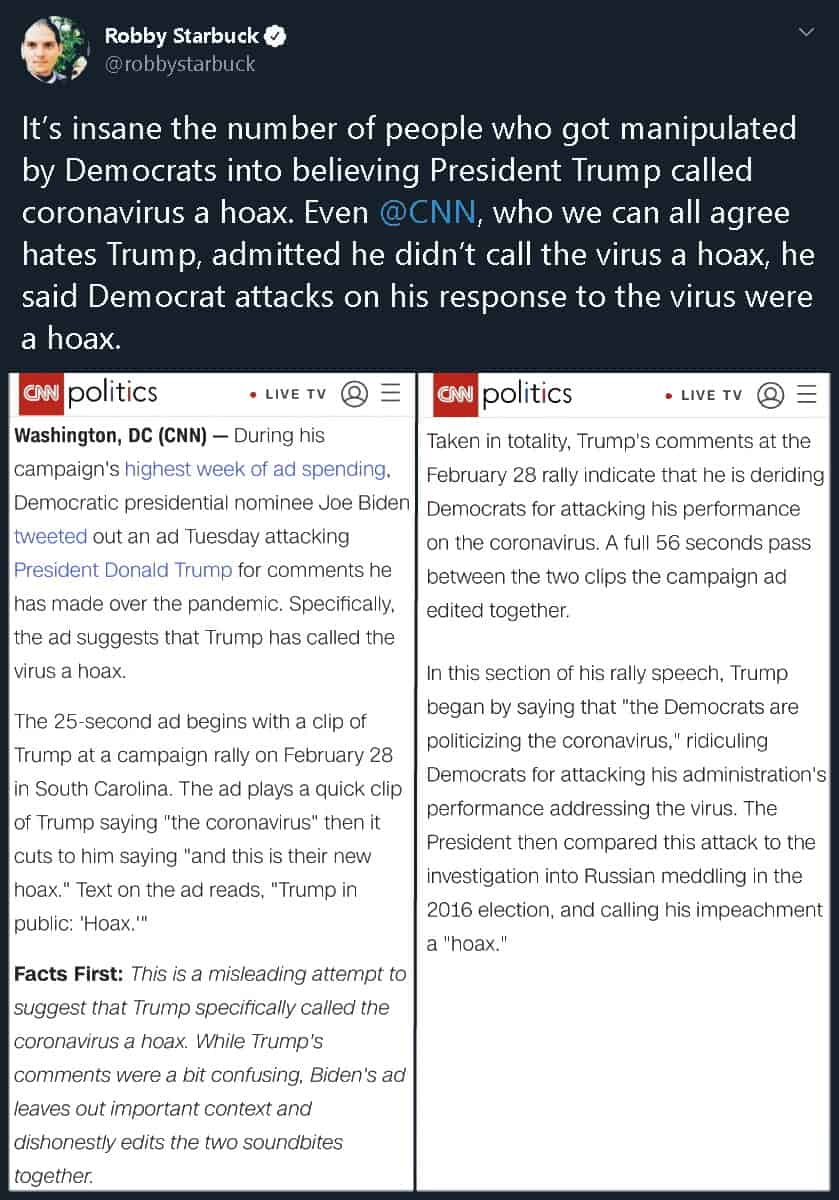 Democrats and the media (and #NeverTrumpers) try to say that the Trump administration refused and slowed test kits for the Wuhan Virus (COVID-19). This just is not the case, as the interview Larry Elder excerpts from between Dr. Anthony Fauci and Hugh Hewitt (YOUTUBE) shows clearly.

Earlier this week, Michael Bloomberg and Joe Biden were called out by the AP for lying about President Trump cutting funding to the CDC and NIH.

The facts from the Associated Press: Financing has increased to the CDC and the NIH.https://t.co/DZ7549XNL0

When the AP fact-checks Democrats… you know its bad. More from an earlier AMERICAN THINKER article:

…To set the stage, here are a few indisputable facts:

On January 31, 2020, as China confirmed that 259 people had died and there were about 100 cases reported outside of China, President Trump ordered that the U.S. would prevent foreign nationals who had recently visited China from entering the country. He also ordered quarantined American travelers who posed a high risk.

Democrats were worried that Trump’s germ phobia would make him issue even more and worse racist orders.

President Trump held a press conference during which (1) he was surrounded by government scientists who explained what was going on (2) he appointed Vice President Pence, a competent, experienced administrator, to be the White House point person on coronavirus efforts.

Democrats also announced that henceforth they would call coronavirus “TrumpVirus” because Trump had appointed Pence to oversee the administrative end of dealing with coronavirus and because Trump said there was no need for panic.

Nancy Pelosi complained that Trump had waited too long to act, even though when she spoke not a single American had died.

Elizabeth Warren said that she would end the “racist” border wall by taking all wall funds and putting them into coronavirus research (never mind that, since time immemorial, sealing borders has been one of the prime ways in which governments have been able to protect their citizens from epidemic disease).

Trump stated during the rally in South Carolina that the Democrats’ unceasing and dishonest attacks against him for his handling of the coronavirus risk were their latest hoax.

The media reported that Trump had declared that coronavirus itself was a hoax, one of the most blatantly dishonest bits of reporting ever to come from the media.

Leftists are actively hoping that coronavirus causes so much economic disruption that it will hurt Trump politically – never mind that it will also hurt ordinary Americans….