For some reason the original uploads are in two parts, I combined them… the resolution is bad so I merely shrunk it as the main ideas are still sound:

(From the original video description) Anthony Watts is as interesting a person as you will meet in a lifetime. It was my pleasure to have him come to our KUSI News studio for an interview for my recent “Global Warming: Meltdown” program. Not only did I interview him, but most importantly, he presented his entire SURFACESTATIONS.ORG Powerpoint presentation as an answer to my second question. Anthony Watts is an American broadcast weather presenter (AMS sealholder retired), editor of the blog “Watts Up With That?”, owner of the weather graphics company It Works, and founder of the SurfaceStations.org project that documents the siting of weather stations across the United States. He is a meteorologist for KPAY-AM radio. (Part 1: https://youtu.be/ZzLNQV3dmcI | Part 2: https://youtu.be/x8vlFZlFWKw)

This is an updated segment from an older post from December of 2014, titled: IS 2014 THE HOTTEST YEAR? NO (PART 2 OF A SERIES). A recent inclusion of the hard work done by Anthony Watts over at WATTS UP WITH THAT? is included in the article from Commentary, linked below:

Here is a recent mention of the below in COMMENTARY MAGAZINE (added here 9-4-19, emphasis added here):

…A STUDY by meteorologist Anthony Watts found that almost 90 percent of the 1221 weather stations in the U.S. did not meet the National Weather Service’s setting standards, which requires that they be at least 100 feet from any artificial heat source or radiating surface. You can see some of the most egregious violators HERE. To deal with this defective information, climate scientists, have “adjusted” the data to solve this problem. Invariably, these adjustments have made earlier data show lower temperatures, and recent data show higher ones.

To develop reliable data, the National Oceanic and Atmospheric Administration (NOAA) placed 114 state-of-the-art weather stations relatively evenly spaced about the lower 48 states. They were carefully sited to be away from urban areas, which are heat islands, airports, which can be affected by jet exhaust, etc.

The system became operative in 2005. Now, realclearenergy.com is REPORTING that there has been no increase in average temperatures in the continental United States over the last 14 years, as measured by these new stations. If anything, overall temperatures are slightly cooler than they were…. 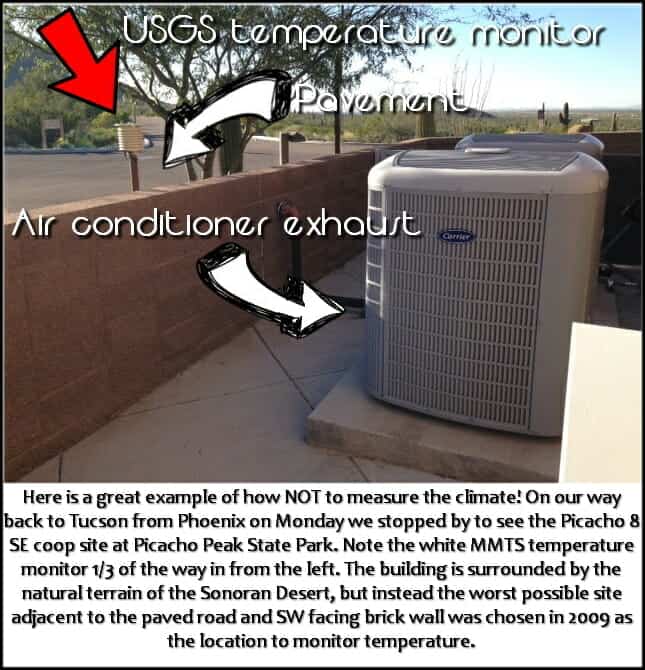 Here are some examples of fudged data because of sub-standard equipment:

You’d think the answer would be obvious, but here we have a NOAA operated USHCN climate station of record providing a live experiment. It always helps to illustrate with photos. Today I surveyed a sewage treatment plant, one of 4 stations surveyed today (though I tried for 5) and found that for convenience, they had made a nice concrete walkway to allow servicing the Fisher-Porter rain gauge, which needs a paper punch tape replaced one a month.

Here is what you see in visible light:

Here is what the infrared camera sees:

Note that the concrete surface is around 22-24°C, while the grassy areas are between 12-19°C

This station will be rated a CRN5 by this definition from the NOAA Climate Reference Network handbook, section 2.2.1: 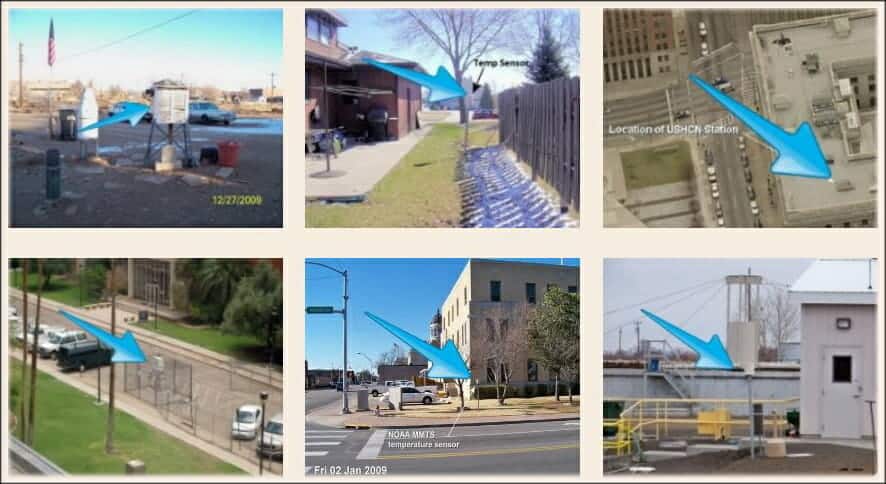 More than half of the stations the NOAA use are tainted or wrongly placed equipment.