(JUMP TO UPDATE) People have been arrested, UNDERCOVER VIDEO shown, and the continued violence against Republicans and Trump supporters (and past | 594 acts of media supported violence), as well as the continued MOB VIOLENCE (see my post) and property damage, and the past U.S. AG calling people to violence?? — In the age of… 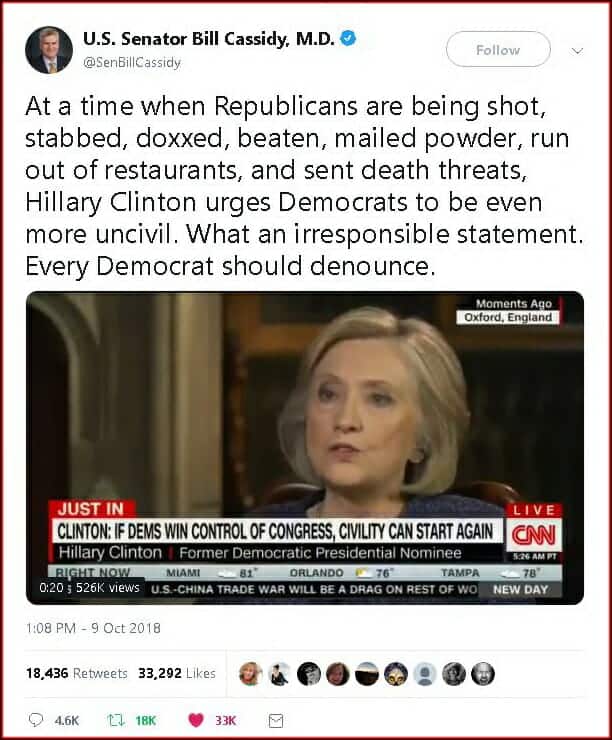 …for the general public NOT TO KNOW is a diservice to them (or, a service to the Democrat Party) — Via TOWNHALL:

Here are the suspects in the line up: Beto O’Rourke, who is challenging Sen. Ted Cruz (R-TX), flat-out lied in a debate about his DUI arrest. Sen. Bob Menendez (D-NJ) accepted lavish gifts from donor and friend Salomon Melgen. For Sen. Claire McCaskill (D-MO), one of the most vulnerable Democrats running for re-election, her husband apparently took advantage of a low-income housing tax credit program to make millions…for himself. Rep. Sheila Jackson Lee’s staffer doxxed Republicans during the vicious fight over the Supreme Court nomination of Brett Kavanaugh. Rep. Jared Polis (D-CO), who is running for governor, reportedly got physical with a female staffer. And Rep. Keith Ellison (D-MN), who is running to be the chief law enforcer of Minnesota, was hit with domestic abuse allegations that the media and his party seemingly decided to straight up ignore. Between all of these scandals, the media devoted less than 10 minutes of media attention from the Big Three, which was the focus of the study (via Newsbusters) [emphasis mine]:

When Texas Senate Democratic challenger Beto O’Rourke lied about a past DUI arrest, it was so blatant even the liberal Washington Post’s fact checkers couldn’t let it pass.

On September 25 The Washington Post’s Glenn Kessler reported the following:

During a debate with his rival, Sen. Ted Cruz (R-Texas), Rep. Beto O’Rourke (D-Tex.) was asked point-blank about a drunken-driving incident when he was 26: Did he try to leave the scene of the crash? The Houston Chronicle and San Antonio Express-News had recently obtained police reports of the collision and reported that O’Rourke had done so. O’Rourke responded with what appeared to be a well-practiced answer. He flatly denied trying to leave the scene of the crash but added that driving drunk was a “terrible mistake” and that he would not provide an excuse….The police reports show not only that O’Rourke was highly intoxicated but that a witness to the crash said he tried to leave the scene.

Back in April, Democratic incumbent Senator Robert Menendez was officially admonished by the Senate for accepting gifts from a donor in exchange for promoting his interests.

The Senate Ethics Committee “severely admonished” Senator Robert Menendez on Thursday for accepting gifts from a wealthy doctor while using his position as a senator to promote the doctor’s personal and financial interests. It also ordered Mr. Menendez, a New Jersey Democrat, to repay the market value of all improper gifts he has not already repaid.

Earlier this month, the husband of Missouri Democratic Senator Claire McCaskill was accused of using a government program intended to help the poor, to personally enrich himself.

Since Claire McCaskill joined the Senate, her husband Joseph Shepard has made at least $11 million through a business that buys up tax credits awarded to Missouri affordable housing developers and sells them to high-income entities seeking tax relief.

At the height of the Brett Kavanaugh hearings, private information about Republican senators was illegally released to the public. A former Democratic staffer was arrested for the crime.

A former staff member for Democratic Congresswoman Sheila Jackson Lee is still in jail tonight. Bail was denied this afternoon for Jackson Costco. He’s accused of committing several felonies including the release of personal information about Republican Senators on the Internet.

Jared Polis, the Democratic nominee for governor in Colorado, was involved in a physical altercation with an ex-employee in which he admitted to police he pushed the woman, according to a police report obtained by the Washington Free Beacon. The incident dates back to June of 1999 and took place at an office Polis had in Boulder for a company called JPS International LLC.

Democratic Congressman and DNC deputy chair Keith Ellison, back in August, was accused of physically abusing an ex-girlfriend.

A former girlfriend of U.S. Rep. Keith Ellison has accused him of domestic violence, which Ellison — a DFL candidate for Minnesota attorney general — denied on Sunday

The alleged incident between Ellison and Karen Monahan came to light Saturday night after her son posted about it on Facebook. She then confirmed it on Twitter. Ellison responded Sunday in a statement released by his campaign: “Karen and I were in a relationship which ended in 2016, and I still care deeply for her well-being.”

News item: Antifa mob overruns Portland, and Democratic mayor stands aside. (And to think, I had dinner once with Ted Wheeler a few years ago, before he was elected mayor of Portland, and thought he was a sensible human being. Another case of misleading first impressions I guess.)

Okay, so this last item is from 1851—the famous caning of Republican Senator Charles Sumner by southern Democrat Preston Brooks. But some things never change. And as Lincoln once said, “If we know where we are, and whither we are tending, we can better judge what to do, and how to do it.” And with the Democratic Party openly embracing mob tactics, we can make out a reversion to a very old pattern……….