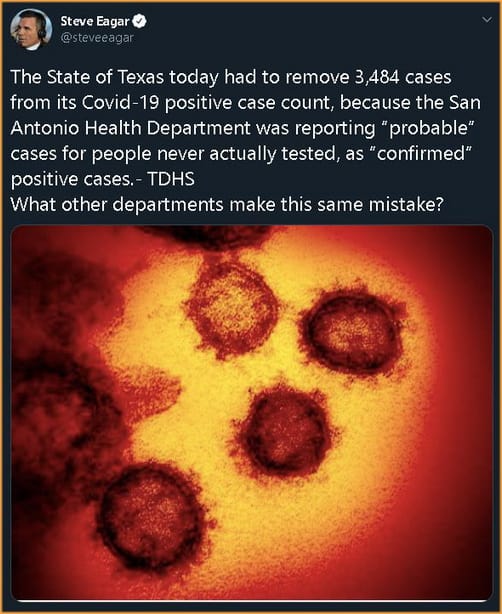 The change in cases comes as questions have been raised across the country about coronavirus testing, most notably in Florida. An investigation in the state determined that the test positivity rate reported by officials was inaccurate and that the number of positive tests was much lower than reported.

In May, coronavirus task force member Dr. Deborah Birx suggested that the actual number of coronavirus cases could be inflated by as much as 25%, while others have argued that cases have been undercounted.

Questions about the number of coronavirus cases have also been raised in Colorado, Pennsylvania, and New Jersey over claims that suspected coronavirus patients are dying from causes other than the virus.

CHICKS ON THE RIGHT note that the real question “becomes how accurate can the antigen test be?” Continuing, this is hinted that it does not fair well for other than strep.

The question We see that an antigen test for strep is accurate but the rapid test for the flu is not. NPR reported, “Researchers do not expect it to be as accurate as the PCR diagnostic test, but it is possible the antigen tests could be used to screen patients for infection. Dr. Jordan Laser, a lab director at Northwell Health, notes antigen testing is used for rapid strep tests, which are reliable, and rapid flu tests, which are not.”

We haven’t even created an accurate test for the flu. The flu that has been around all of my life, and we cannot figure out how to create an accurate rapid test, but we are supposed to believe an antigen test for a brand new virus is accurate?

This is serious. We are being lied to by the Democrat cities where they have labs that conveniently are showing 100% positive rates, but after audits are more around the 9% rate and some labs are even lower than that. They use these high numbers to justify shutting down businesses and schools and locking everyone at home.

SENT POSITIVES WITH NO TEST

One of the managers at Von’s told me today his wife’s sister or his sister (I forget what he said) had made an appointment to get tested for Covid. He said she cancelled, but a few days later received a notice she was positive. Here is another confirmation of such shenanigans:

And as states are going over death certificates, they are dropping by at least 25% in deaths by Covid-19. And some independent groups are helping “catch” the inflated number, like Pennsylvania’s “Wolf administration was caught this week adding up to 269 fake deaths to the state totals on Tuesday” (CITADELPOLITICS). Or this short example (PJ-MEDIA)

Just one more of the many examples I could share is the New York Times getting 40% wrong of their “died from Covid-19 under 30-years old” front page news story. Mmmm, no, they didn’t die of Covid. As states figure this out, the inflated counts (like when Colorado did this — fell by 25%: lots more on this below).

On Thursday, the Washington State Department of Health (DOH) confirmed a report by the Freedom Foundation that they have included those who tested positive for COVID-19 but died of other causes, including gunshot injuries, in their coronavirus death totals. This calls into serious question the state’s calculations of residents who have actually died of the CCP pandemic.

First up, Dr. Birx setting the stage for this with how deaths are coded:

Another example comes from Dr. Ngozi, Director of public health Illinois. She explains how ALL deaths are counted as Covid-19 even if the patient was diagnosed to have die from another disease:

“Should “COVID-19” be reported on the death certificate only with a confirmed test? COVID-19 should be reported on the death certificate for all decedents where the disease caused or is assumed to have caused or contributed to death.” (CDC): “Deborah Birx, a physician who’s leading the White House’s coronavirus task force, said Alabama’s strategy conflicts with CDC’s approach to tallying Covid-19-realted deaths. “[W]e’ve taken a very liberal approach to mortality,” she said. “[I]f someone dies with Covid-19, we are counting that as a Covid-19 death.” (ADVISORY)

As many have pointed out, there is a big difference between dying WITH the virus and FROM the virus.

Note Dr. Birx’s similar wording to what Italy was doing:

“‘We’ve taken a very liberal approach to mortality….” “The way in which we code deaths in our country is very generous in the sense that all the people who die in hospitals with the coronavirus are deemed to be dying of the coronavirus.”

Italy, unlike the CDC, corrected its error:

A study in JAMA this week found that almost 40 per cent of infections and 87 per cent of deaths in the country have been in patients over 70 years old.

But Prof Ricciardi added that Italy’s death rate may also appear high because of how doctors record fatalities.

“The way in which we code deaths in our country is very generous in the sense that all the people who die in hospitals with the coronavirus are deemed to be dying of the coronavirus.

“On re-evaluation by the National Institute of Health, only 12 per cent of death certificates have shown a direct causality from coronavirus, while 88 per cent of patients who have died have at least one pre-morbidity – many had two or three,” he says.

Here is more information from Daniel Horowitz over at CONSERVATIVE REVIEW:

1) The shocking inflation of COVID-19 death numbers: From day one, we were warned that states are ascribing every single death of anyone who happens to test positive for the coronavirus — even if they are asymptomatic — to the virus rather than the clear cause of death. Now, thanks to a lawsuit in Colorado, the state was forced to revise its death count down by 23 % over the weekend — from 1,150 to 878. The state is now publishing numbers of deaths “with” COVID-19 separate from deaths “from” COVID-19. As I reported on Thursday, county officials started accusing the state’s department of health of reclassifying deaths of those who tested positive for the virus but died of things like alcohol poisoning as COVID-19 deaths just to insidiously inflate the numbers. This revision in Colorado is a bombshell story that, of course, will remain unknown to most Americans. Every state needs to do this, and if they did, we would find an across-the-board drop in numbers by at least 25%, the same %age by which Dr. Birx reportedly believes the count is being inflated, according to the Washington Post. For example, in Minnesota, state officials are now admitting that every single person who dies in a nursing home after testing positive is now deemed to have died from the virus, never mind the fact that 25% of all natural deaths in a given week occur in nursing homes and that most cases of COVID-19 are asymptomatic, which means more often than not, they died exclusively of other causes.

(there are five other points made by Horowitz)

TO WIT… Dennis Prager’s guest is Dr. Joel Hay, who is a professor in the department of Pharmaceutical Economics and Policy at the University of Southern California. Both give examples of cancer deaths being coded Covid:

And my third evidence to support my contention a nurse is filmed commenting on the percentages of deaths at NYC hospital. In my posts point #2 (the video still up amazingly) notes that every death cert in NYC-hospital is coded as Rona. In fact, 99% of deaths from that hospital were coded Rona during a period — AN IMPOSSIBLE statistic (my site)

A CLEARER PICTURE blog comments on the above indirectly:

Around 7,000 of the NYC deaths attributed to COVID-19 have been thoroughly investigated to determine if there was another serious life-threatening illness present

Take a deep breath if doing so hasn’t been outlawed where you live.

99.2% of those 7,000 New Yorkers who supposedly died from the virus had another antecedent life-threatening illness. For all intents and purposes, that’s all of them.

How is it even remotely possible that 7,000 NYC deaths attributed to COVID-19 were investigated and virtually every single one of them found to have involved at least one other life-threatening illness if the virus is in and of itself deadly?

Most strains of coronavirus that affect humans are common cold viruses.

What reason do we have to believe COVID-19 is actually killing anyone?

No one knows how many Americans have really died of COVID-19….

However, we are starting to find out that “pure” deaths caused by Covid-19 exclusivelt is low (DAILY WIRE):

On Tuesday, San Diego county Supervisor Jim Desmond said after digging into the data that he believes only six of the county’s 194 coronavirus-identified deaths are “pure” coronavirus deaths, meaning they died from the virus, not merely with the virus.

Desmond was seemingly ruling out deaths from individuals with preexisting conditions.

“We’ve unfortunately had six pure, solely coronavirus deaths — six out of 3.3 million people,” Desmond said on a podcast, Armstrong & Getty Extra Large Interviews, according to San Diego Tribune. “I mean, what number are we trying to get to with those odds. I mean, it’s incredible. We want to be safe, and we can do it, but unfortunately, it’s more about control than getting the economy going again and keeping people safe.”

Public Health Officer Dr. Wilma Wooten suggested Wednesday during a press briefing that Desmond was being callous, noting that their liberal identification of COVID-19 deaths is uniform with coding nationwide.

“Their life is no less valuable than someone’s life who does not have underlying medical conditions,” Wooten said. “This is not just San Diego. This is how this is done throughout the entire nation in terms of identifying who has died of COVID-19.”…