Despite fawning media coverage, it’s difficult to point to a single accomplishment. 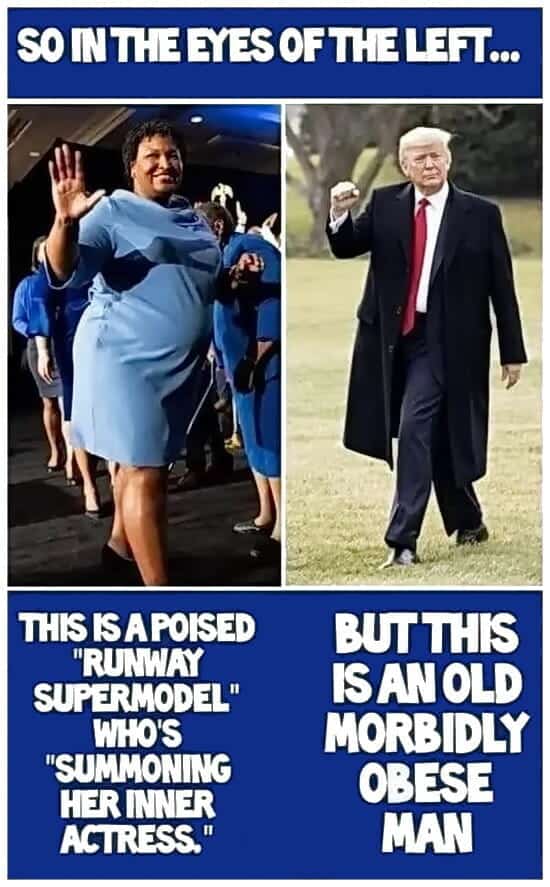 PJ-MEDIA notes Stacey’s side work… as a soft core novelist:

Ever wonder why Stacey Abrams can afford those sumptuous, jewel-toned tents she wears?*

When Abrams isn’t appearing on MSNBC or CNN campaigning to be Joe Biden’s vice president, the mahogany beauty, whose imagination is so active that she thinks she’s the governor of Georgia, is keeping her revenue streams flowing like the Amazon.

Abrams is on the political speech-for-hire circuit, but before she became a professional politician and national victim, the gap-toothed Ivy Leaguer was a soft-core romance novelist.

And Selena is thirsty.

Her romance bibliography includes Hidden Sins, the story of Mara Reed, who has “the devil in her.”

Mara Reed’s been stirring up trouble since she was eighteen—running scams, living on the edge, always on the run. … But cornered in an alley, only seconds from death, an unexpected rescuer comes to her aid—Dr. Ethan Stuart, the dark and beautiful scientist whose heart she once broke and betrayed . . . the only man Mara ever loved. … Ethan needs Mara’s help; she needs his protection. And their search for a shocking, devastating truth could lead them to forgiveness, salvation, passion, and back to love… if they can survive the journey.

She just witnessed her uncle’s murder, she’s running for her life, and now Dr. Katelyn Lyda is face-to-face with a breathtaking man who could be her salvation. Tall, sexy, his eyes full of mysterious promises, he seems to have the answer she needs.

A “recovery specialist” skilled at separating prized possessions from their owners, Sebastian is after an ancient relic. But he reconsiders the job when he finds himself staring at the wrong end of a gun.

With her life in jeopardy, Kat wonders how far she can trust Sebastian Caine… how long she can resist him… and dare she fall in love?….

INDEPENDENT SENTINEL has a good story on Abrams.

POWERLINE humorously passes along some humor on the WaPo Magazine puff piece: