What are we to make of this first part of the quote often ripped from it’s context (both in the letter as well as from the complexity of history) by leftist historians and unsuspecting persons. The first thing to do is to quote it in a fuller context:

The most important thing to remember is when this letter to Horace Greely was written, the Emancipation Act was on Lincolns desk.

Again, President Abraham Lincoln informs his chief advisors and cabinet that he will issue a proclamation to free slaves, but adds that he will wait until the Union Army has achieved a substantial military victory to make the announcement, BEFORE writing to Greely. [Context is King.] Let us add some flavor to the obviously hard decisions on the Executive level in keeping both sides happy while tacking like a sailboat through choppy waters towards the big goal:

…Tugging him in the other direction were abolitionists such as Frederick Douglass and Horace Greeley. In his editorial, “The Prayer of Twenty Millions,” Greeley assailed Lincoln for his soft treatment of slaveholders and for his unwillingness to enforce the Confiscation Acts, which called for the property, including slaves, of Confederates to be taken when their homes were captured by Union forces. Abolitionists saw the acts as a wedge to drive into the institution of slavery.

By hinting that ending slavery might become a goal of the war, Lincoln was preparing the public for the change in policy that would come one month later with the Emancipation Proclamation.

Remember, history is complicated, as President, his position on slavery was initially less enlightened and more pragmatic (perhaps in an effort to keep the border states from seceding). Lincoln’s official position from his candidacy through the early years of the war was that he opposed expansion of slavery into new territory, but believed it could continue to exist in existing slave states. Even as the war went on, he grew into the role of “The Great Emancipator” rather than arriving as a finished product. At one point,

Both those early fixes floated around as options to a problem that men-cannot-own-men would have ended slavery. Something he believed in ending, personally, all-the-time. [See his notes for the debate with Douglas below.] But it took a while to implement it in the the Union as official policy. Something this generation does not understand with their one-hour photo, half-hour pizza, email vs. snail mail… there is no understanding of the time [times] being discussed.

Put another way (trying to break this down “Barney Style“):

In other words, Lincoln was part of — in the end — the eradication of slavery. It is simply that one’s view of Lincoln depends on whether he gets credit for the destination he ultimately arrived at or not.

This same idea applies to discussions about ancient texts as well.

What caused the Civil War? Did the North care about abolishing slavery? Did the South secede because of slavery? Or was it about something else entirely…perhaps states’ rights? Colonel Ty Seidule, Professor of History at the United States Military Academy at West Point, settles the debate below:

Dennis Prager interviews Professor of History at the United States Military Academy at West Point, Colonel Ty Seidule, about the recent Prager University video on the reasons for the Civil War (video at top). The idea that the war was over other reasons like states rights is true… the right for the Southern states to practice slavery. All one has to do is read the “Ordinance’s of Secession” from the seceding states:

A good place to touch base on these ordinances is here. Another great thing to do is read the debates between Lincoln and Douglas. Another resource are three videos found on a page on my site, dealing with some of these myths.

Two books I recommend on the issue are:

What This Cruel War Was Over ~ With letters from the soldiers themselves and battlefield communiques, what did the men on the ground think the war was over;

Half Slave and Half Free ~ One of the best books combining the time from our founding to the roots of the Civil War.

Here is a graph of the main grievances the states who left the union had… and the text is all the Reasons for Secession documents with the highest percentage of grievances, of which I will focus on the top six: 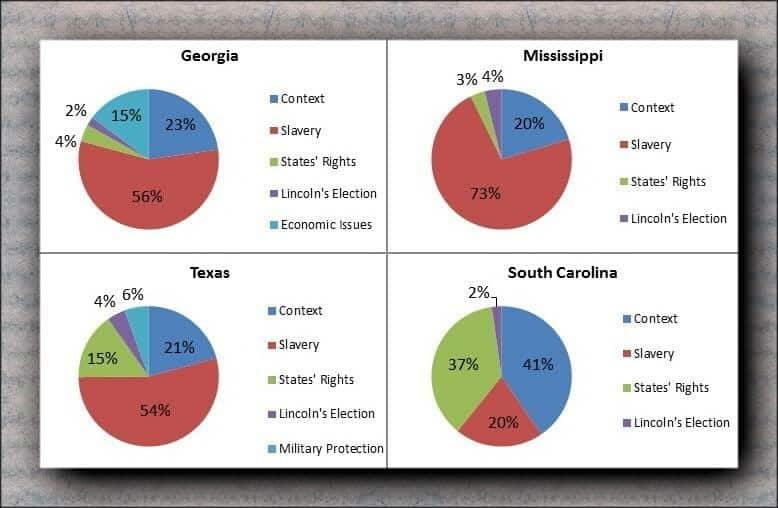 In other words, when the reasons for seceding were written the states wanted their own right to have slaves.

When the documents are broken down, Slavery is the main reason:

1) Each declaration makes the defense of slavery a clear objective.
2) Some states argue that slavery should be expanded.
3) Abolitionism is attacked as a method of inciting violent uprisings.
4) Mississippi and Georgia point out that slavery accounts for a huge portion of the Southern economy.

When it shifts to States Rights, it is still about the choice to keep slavery:

1) The states argue that the Union is a compact, one that can be annulled if the states are not satisfied with what they receive in return from other states and/or from the federal government.

[…sounds reasonable… but the above is qualified with the below…]

2) The states argue that the North’s reluctance to enforce the Fugitive Slave Act of 1850 (mandating that fugitive slaves be returned to the South) means that the compact is no longer satisfactory.

These are the top SIX reasons for secession. The economy was another reason… but these concerns hinged on slavery. The election of Abraham Lincoln was a concern as well, this again was mainly because of slavery.

Are you getting the picture?

Here is the History Channel:

In the mid-19th century, while the United States was experiencing an era of tremendous growth, a fundamental economic difference existed between the country’s northern and southern regions. While in the North, manufacturing and industry was well established, and agriculture was mostly limited to small-scale farms, the South’s economy was based on a system of large-scale farming that depended on the labor of black slaves to grow certain crops, especially cotton and tobacco. Growing abolitionist sentiment in the North after the 1830s and northern opposition to slavery’s extension into the new western territories led many southerners to fear that the existence of slavery in america–and thus the backbone of their economy–was in danger.

In 1854, the U.S. Congress passed the Kansas-Nebraska Act, which essentially opened all new territories to slavery by asserting the rule of popular sovereignty over congressional edict. Pro- and anti-slavery forces struggled violently in “Bleeding Kansas,” while opposition to the act in the North led to the formation of the Republican Party, a new political entity based on the principle of opposing slavery’s extension into the western territories. After the Supreme Court’s ruling in the Dred Scott case (1857) confirmed the legality of slavery in the territories, the abolitionist John Brown’s raid at Harper’s Ferry in 1859 convinced more and more southerners that their northern neighbors were bent on the destruction of the “peculiar institution” that sustained them. Lincoln’s election in November 1860 was the final straw, and within three months seven southern states–South Carolina, Mississippi, Florida, Alabama, Georgia, Louisiana and Texas–had seceded from the United States….

In a discussion on the Civil War, I was challenged with a couple points, the first being that Lincoln didn’t care much about slaves/slavery and merely wanted to win the war for other reasons. And the other challenge was if the South was sooo racist, why did the South offer freedom to slaves who fought for them. Here is the comment:

I posted an article about Lincoln knowing it was “morally wrong,” but not even wanting to free the slaves, right? Lincoln wanted to win the war, and since the South offered freedom to slaves who fought for them first, then you kinda have to understand that Lincoln only wanted to win the war by following suit.

I first merely note some notes Lincoln had on him during his famous debate with Stephen Douglas in 1858, BEFORE the war. He wrote:

“If A can prove, however conclusively, that he may, of right, enslave B — why not B snatch the same argument, and prove equally, that he may enslave A?

You say A is a white, and B is black. It is –color–, then; the lighter, having the right to enslave the darker? Take care. By this rule, you are to be the slave to the first man you meet, with a fairer skin than your own.

You do not mean color exactly? — You mean the whites are –intellectually– the superiors of the blacks, and therefore, have the right to enslave them? Take care again. By this rule, you are to be slave to the first man you meet, with an intellect superior to your own.

Doesn’t sound like his views were an afterthought? These thought pre-dated the war. And if anyone reads that debate you will see slavery was foremost in the discussion.

Another point I make is from James W. Loewen, Emeritus Professor of Sociology at the University of Vermont, is the author of “Lies My Teacher Told Me” and “The Confederate and Neo-Confederate Reader,” notes that this idea of blacks fighting for and being offered freedom was three weeks before the end of the war (via Live Science):

The argument over whether blacks took up arms to fight for the government that enslaved them is a bitter one, but historians have busted this myth, Deaton said.

“It’s completely false,” Loewen said. “One reason we know it’s false was that the Confederacy by policy flatly did not allow blacks to be soldiers until March of 1865.”

The idea had been brought up before, University of Tennessee historian Stephen Ash wrote in 2006 in the journal Reviews in American History. In January of 1864, Confederate Maj. Gen. Patrick R. Cleburne proposed enlisting slaves. When Confederate President Jefferson Davis heard the suggestion, Ash wrote, he “not only rejected the idea but also ordered that the subject be dropped and never discussed again in the army.”

About three weeks before the Civil War ended, however, a desperate Davis changed his tune. By that point, the war was lost and few, if any, blacks signed up.

White officers did bring their slaves to the front, where they were pressed into service doing laundry and cooking, Loewen said.

Fact #9: The Emancipation Proclamation led the way to total abolition of slavery in the United States.

With the Emancipation Proclamation, the aim of the war changed to include the freeing of slaves in addition to preserving the Union. Although the Proclamation initially freed only the slaves in the rebellious states, by the end of the war the Proclamation had influenced and prepared citizens to advocate and accept abolition for all slaves in both the North and South. The 13th Amendment, which abolished slavery in the United States, was passed on December 6th, 1865

Fact #10: Lincoln considered the Emancipation Proclamation the crowning achievement of his presidency.

Heralded as the savior of the Union, President Lincoln actually considered the Emancipation Proclamation to be the most important aspect of his legacy. “I never, in my life, felt more certain that I was doing right, than I do in signing this paper,” he declared. “If my name ever goes into history it will be for this act, and my whole soul is in it.”