John Solomon, Sara Carter, and Gregg Jarrett were on Hannity’s radio show yesterday and the latest news about Rod Rosenstein wearing a wire to record the President is the topic de-jure. There seems to be more-and-more damaging information coming out that lays bear just how political the FBI and DOJ have gotten. I INCLUDE the segment from FOX NEWS at the end of the audio from the radio program.

“THE LAST REFUGE” has an excellent article on the subject. Here is the latest from GATEWAY PUNDIT (and remember, those two sites aren’t necessarily my favorite… but these two posts fill in some blanks):

…According to multiple reports, Deputy Attorney General Rosenstein has given a verbal resignation to Chief of Staff John Kelly following an explosive NYT report he wanted to wear a wire and oust Trump from office.

Last week, Freedom Caucus Chairman Mark Meadows (R-NC), who previously filed articles of impeachment against Rosenstein, called for the Deputy Attorney General to appear before Congress under oath this week.

But today Rosenstein notified Congress he will not turn over the subpoenaed memos and will not appear before the House Judiciary Committee on Thursday…. 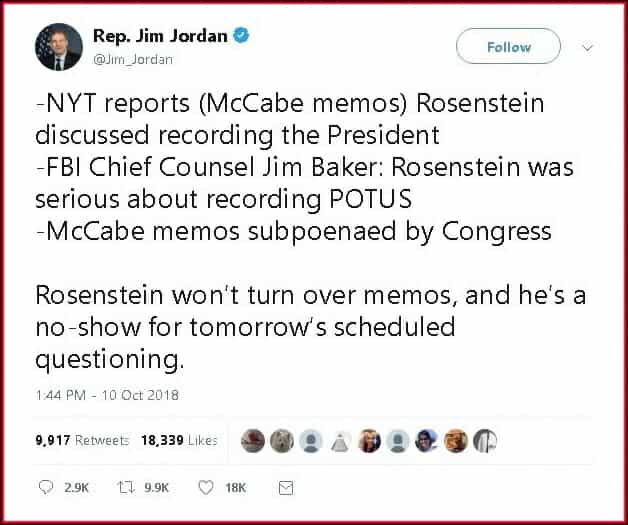