What Presidents Do on Armed Forces Day (Above photo) Former president George W Bush was in Bentonville, Arkansas attending a separate ceremony for 14 living recipients of the Medal of Honor. The event also raised money for the Congressional Medal of Honor Society and Foundation. He chose to not be at the opening ceremony of the September 11 Memorial Museum because he didn’t want to stir emotions.

(GayPatriot — V the K) Saturday was Armed Forces Day. But instead of expressing gratitude to the men and women who serve in uniform, the Obama Administration chose to honor ‘Pander to Gay Victimhood Day,’ a.k.a. ‘International Day Against Homophobia Or Transphobia.’ In addition to the Administration’s usual policy tools of Tweets and #Hashtags, U.S. Embassy in non-Muslim countries were instructed to raise rainbow flags in gratitude to wealthy gays and lesbians who donate so generously to the Democrat Party… 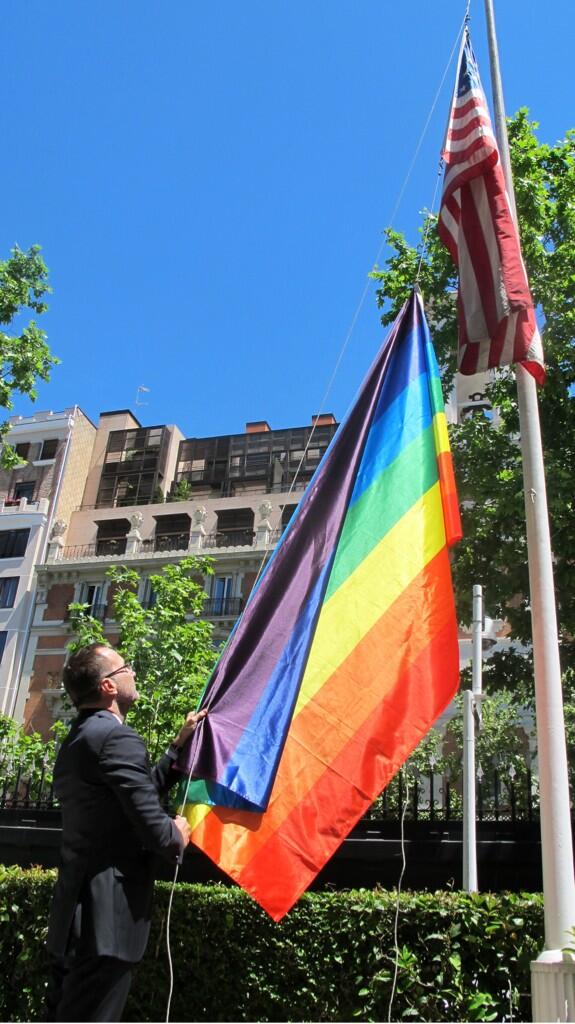 This is what are embassies were doing on Amred Forces Day, via the Obama admin, Via Moonbattery: At least Old Glory still flies above the apparently larger rainbow flag. For now, anyway. Small wonder our adversaries don’t take us seriously anymore.

It seems Obama really doesn’t think much of those who serve in our military. Saturday, May 17, is Armed Forces Day — a day created by Harry Truman in 1949 to celebrate all the branches of the military.

Obama, however, failed to mention Armed Forces Day on Twitter, Weasel Zippers noted. Instead, he chose to mark “International Day Against Homophobia Or Transphobia,” even using the #IDAHOT hashtag. He also marked the 60th anniversary of the Supreme Court Brown vs. Board of Education ruling.

One thought on “Our Pandering President Ignores “Armed Service Day””