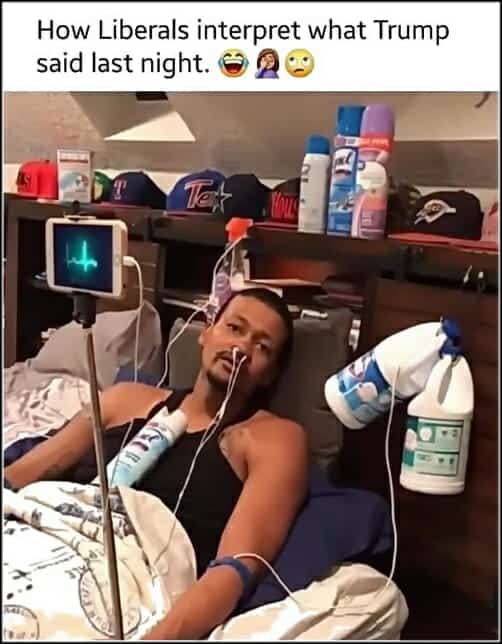 This story is multiplied at many sites, but I like LEGAL INSURRECTION’S “inflection.” Here is the meat of their post, and I will include others sites after the excerpt (I will emphasize):

This is why when Donald Trump became president I told friends to always listen to his full remarks. Everyone knew the MSM would twist his words to make him sound evil and stupid.

The MSM and liberals on Twitter did just that yesterday. They claim Trump suggested people inject themselves with disinfectants in order to cure the Wuhan coronavirus.

Then Trump said this (emphasis mine):

If Trump did not include the “or almost a cleaning” then yes I could see how people would think he meant an actual injection. Even then, come on, people. Use your freaking brain.

But ABC News reporter Jon Karl asked Bryan if there is any “scenario that could be injected into a person.”

Of course, Bryan said they “don’t do that within that lab at our labs.”

Trump then clarified his remarks because people are stupid:

I do have to say though, there are some pretty funny Twitter stuff about the whole thing.