Wednesday on the radio, Mark Levin addressed the latest sexual assault allegations raised against Judge Brett Kavanaugh and pointed out a pattern: 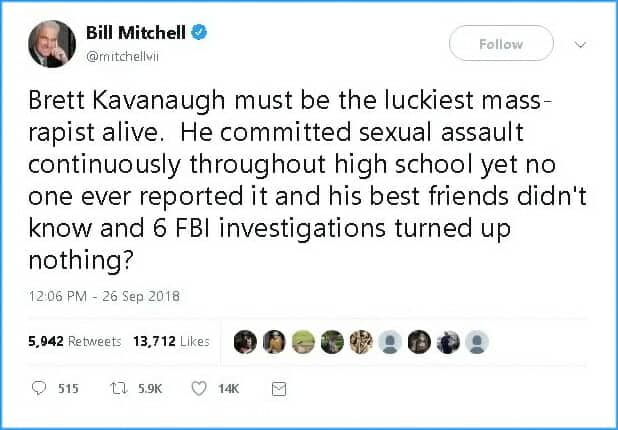 Holy moly the news just gets more wild and crazy. Now there’s a man who has come out to say that Dr. Christine Ford has confused an interaction HE had with her, and accidentally blamed Kavanaugh for it!!!!

That would completely wipe out her credibility, on the evening before she’s set to testify before the Senate Judiciary Committee. Unbelievable. We’ll update as this story develops…

UPDATE: THERE ARE NOW TWO MEN!!!

“Whoa. Senate Judiciary Committee Republicans say they have spoken to two men who think they, not Kavanaugh, had the 1982 encounter that formed the basis for her sexual abuse claim. (These tables are from a timeline the committee majority published 15 minutes ago.)”… 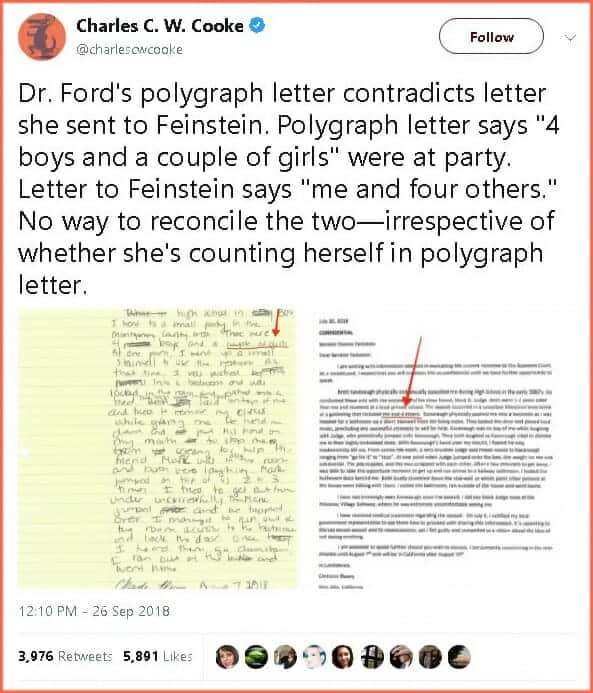 Christine Blasey Ford’s attorneys sent Senate Judiciary Committee Republicans a report from a polygraph examiner who interviewed her on August 10.

But they refused on Wednesday to provide the committee with copies of notes from her psychotherapy sessions. Ford has said she first spoke to a therapist in 2012 about her memories of an ordeal.

‘Any request that she expose her private medical records for public inspection represents an unacceptable invasion of privacy,’ attorney Debra Katz wrote.

Katz, however, handed over the polygraph results to buttress her client’s accusation.

The test examiner asked Ford to write down a description of what happened to her at a high school party in the early 1980s, where she claims a drunken teenage Kavanaugh groped her and tried to remove her clothing while pinning her to a bed and covering her mouth.

AFTER INTERVIEWING HER ABOUT HER STATEMENT, THE EXAMINER ASKED HER A PAIR OF YES-OR-NO QUESTIONS ABOUT THE WRITTEN NARRATIVE.

The report doesn’t mention questions about any specific parts of her story.

The polygraph examiner wrote that her two responses were ‘not indicative of deception,’ and that the chance she was lying was a tiny fraction of one per cent….

(DAILY MAIL | emphasis added | editor’s note: there were no comparison questions asked in differing ways to create a baseline)

NEW YORK TIMES – No Evidence/Witnesses At All

The New York Times reported on Sunday that it was unable to corroborate the claims of a second accuser who says Supreme Court nominee Brett Kavanaugh exposed himself to her in college.

Deborah Ramirez alleges that Kavanaugh thrust his penis into her face while she was drunk at a Yale University dormitory party. The New Yorker ran with Ramirez’s allegation on Sunday despite being unable to produce any firsthand witnesses or confirm that Kavanaugh was at the party where the incident was said to have occurred.

The New York Times noted several paragraphs deep in a report that it chose not to report on Ramirez’s allegation because of a lack of corroborating evidence.

“The Times had interviewed several dozen people over the past week in an attempt to corroborate her story, and could find no one with firsthand knowledge,” the NYT’s Sheryl Gay Stolberg and Nicholas Fandos reported. “Ms. Ramirez herself contacted former Yale classmates asking if they recalled the incident and told some of them that she could not be certain Mr. Kavanaugh was the one who exposed himself.”….

…However, a woman who described herself as Ramirez’s best friend at the time told the New Yorker that she never heard about the story: “I was never told this story by her, or by anyone else. It never came up. I didn’t see it; I never heard of it happening.”

RAMIREZ NOT SURE – ONE

The Washington Post and other news outlets had attempted to report out Ramirez’s story in the days before the New Yorker report. She declined to speak with the Post. The New York Times could not corroborate it,

saying It also said that some potential witnesses hadn’t seemed certain about the alleged perpetrator when Ramirez called them about it recently:

The Times had interviewed several dozen people over the past week in an attempt to corroborate her story, and could find no one with firsthand knowledge. Ms. Ramirez herself contacted former Yale classmates asking if they recalled the incident and told some of them that she could not be certain Mr. Kavanaugh was the one who exposed himself.

RAMIREZ NOT SURE – TWO

“To Ronan she said she wasn’t absolutely certain, she needed to make certain before she was going to say anything publicly. She remembered the specifics, the graphic specifics, and she tried to remember for sure who that man was who was in her face,” she told MSNBC’s Joe Scarborough.“With all due respect to the New York Times, which is the best paper in America, just because they couldn’t get the story and speak to her or find the person that we found, who remembered it from back then, doesn’t mean it’s not true.”…

The woman at the center of the story, Deborah Ramirez, who is fifty-three, attended Yale with Kavanaugh, where she studied sociology and psychology. Later, she spent years working for an organization that supports victims of domestic violence. The New Yorker contacted Ramirez after learning of her possible involvement in an incident involving Kavanaugh. The allegation was conveyed to Democratic senators by a civil-rights lawyer. For Ramirez, the sudden attention has been unwelcome, and prompted difficult choices. She was at first hesitant to speak publicly, partly because her memories contained gaps because she had been drinking at the time of the alleged incident. In her initial conversations with The New Yorker, she was reluctant to characterize Kavanaugh’s role in the alleged incident with certainty. After six days of carefully assessing her memories and consulting with her attorney, Ramirez said that she felt confident enough of her recollections to say that she remembers Kavanaugh had exposed himself at a drunken dormitory party, thrust his penis in her face, and caused her to touch it without her consent as she pushed him away. Ramirez is now calling for the F.B.I. to investigate Kavanaugh’s role in the incident. “I would think an F.B.I. investigation would be warranted,” she said.

…The New York Times noted that it could not independently corroborate the third Brett Kavanaugh accuser’s allegation that he engaged in “abusive” behavior toward girls at parties in high school.

“None of Ms. Swetnick’s claims could be independently corroborated by The New York Times, and her lawyer, Michael Avenatti, declined to make her available for an interview,” the Times wrote in a story Wednesday….

CRAZY PAST – Threats and Taxes

…A Miami-Dade County court docket shows a petition for injunction against Swetnick was filed March 1, 2001, by her former boyfriend, Richard Vinneccy, who told POLITICO Wednesday the two had dated for four years before they broke up.

Thirteen days later, the case was dismissed, not long after an affidavit of non-ability to advance fees was filed.

According to Vinneccy, Swetnick threatened him after they broke up and even after he got married to his current wife and had a child.

“Right after I broke up with her, she was threatening my family, threatening my wife and threatening to do harm to my baby at that time,” Vinneccy said in a telephone interview with POLITICO. “I know a lot about her.”

Vinneccy, 63, is a registered Democrat, according to Miami-Dade County voting records….

OWES MONEY – Lied In The Past

Swetnick also claims to have a security clearance with the IRS despite having recently had a $40,000 judgement against her for unpaid taxes. She settled a $40,303 IRS judgement on March 23 of this year, according to a public records search. Maryland court records show a $62,821 tax lien filed against her on Oct. 2, 2015.

Swetnick has also been involved in civil cases in Maryland and Oregon.

In November 2000, she was sued by Webtrends, a web company in Portland that Swetnick worked for from December 1999 through August 2000. It is not clear how the case was decided or what Swetnick allegedly said to defame the company. Webtrends did not respond to a request for comment.

Swetnick filed a personal injury lawsuit against the Washington, D.C. Metro in September 1994. The outcome of that case is also unclear.

NO CONFIRMATION RAMIREZ AT PARTY

This is amazing —two male students who were allegedly at the party, the wife of another male student, and three other Yale classmates all tell Ronan Farrow that there is no way Kavanaugh assaulted Ramirez.

And here’s the kicker… Ronan Farrow could not confirm Kavanaugh was at the party Ramirez describes.