Two stories I think that are nails in the coffin of these two radical anti-semites The first links to multiple stories for the reader to follow, and comes from ONE NEWS NOW:

One fact reportedly whitewashed by the mainstream media in all its coverage about the trip Rep. Rashida Tlaib (D-Mich.) and Rep. Ilhan Omar (D-Minn.) planned to Israel is that it was sponsored by an Islamic terrorism-supporting group.

The two Muslim congresswomen did not plan their trip via the conventional bipartisan route.

“The most important element of the story is the fact that two American congresswomen shunned a bipartisan congressional delegation to Israel to go on an independent trip to Israel sponsored by vicious anti-Semites,” NATIONAL REVIEW REPORTED. “Another important element of the story is that – as of [Friday] – the mainstream media have whitewashed Omar and Tlaib’s vile associations.”

The Washington Examiner reported that only one of seven Associated Press reports on the Omar-Tlaib Israel visit mentioned Miftah, with the six others merely calling it a Palestinian advocacy group – similar to the New York Times. The Los Angeles Times and Washington Post both referred to Miftah as “a nonprofit organization headed by Palestinian lawmaker” with the latter associating it to “longtime peace negotiator Hanan Ashrawi.” Reuters, ABC News and Yahoo did not mention Miftah’s anti-Semitic nature and Bloomberg News omitted its mention entirely.

Israeli Prime Minister Benjamin Natanyahu’s initial denial of Tlaib’s and Omar’s entry into Israel days before their scheduled visit – he later permitted Tlaib to visit her aging grandmother in the West Bank after her plea, which she rejected when offered – appears to be well-warranted in lieu of the discovery that the trip was sponsored by Miftah, known for its jihadist ties and anti-Semitic teachings.

“Miftah – which Israeli Prime Minister Benjamin Netanyahu revealed was funding their trip – is an extremely anti-Semitic Palestinian advocacy group with ties to Palestinian terrorism,” THEBLAZE NOTED. “The organization even once promoted Neo-Nazi material.”

In addition, Miftah has spread other anti-Semitic lies – some of which it has tried to wash its hands.

“Miftah… promotes anti-Semitic doctrines, like the ‘blood libel,’ which claims ‘the Jews used the blood of Christians in the Jewish Passover,’” THE WASHINGTON EXAMINER ASSERTED…….

This second piece notes the passing on of cartoons between the two women on Twitter that are done by clear anti-Semites. 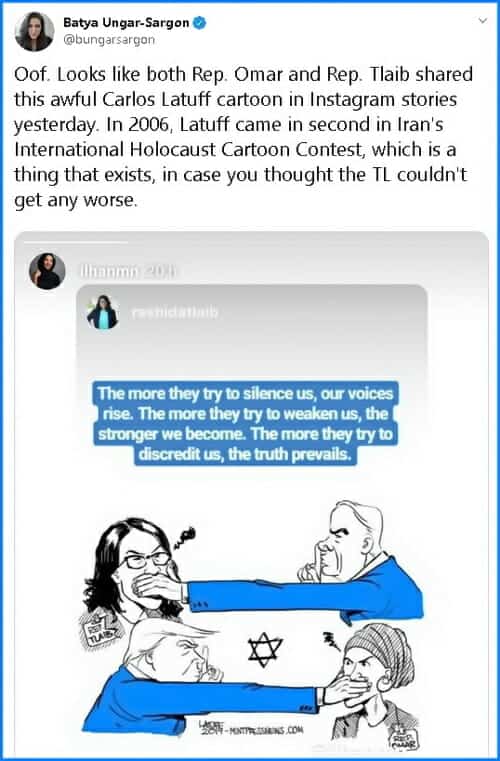 …Ungar-Sargon pointed out that the artist behind this tripe entered work in Iran’s International Holocaust Cartoon Contest in 2006 and won second place. (Just ask yourself, what kind of country has a Holocaust cartoon contest? And what kind of man would enter such a thing?)

His cartoon was a work that showed a man wearing the Arab head scarf known as a keffiyeh – possibly made best known by the late PLO leader Yasser Arafat – along with the striped uniform of Jewish concentration camp prisoners of the Holocaust.

Just the kind of charmer who would fit right in with Tlaib, Omar and the rest of “the squad.”…

“BDS is a bullshit purity test by people who want to appear woke but actually slept through history class,” Bill Maher said Friday.

“It’s predicated on this notion, I think — it’s very shallow thinking — that the Jews in Israel, mostly white, and the Palestinians are browner, so they must be innocent and correct, and the Jews must be wrong,” the Real Time host continued. “As if the occupation came right out of the blue, that this completely peaceful people found themselves occupied.”….