This will be a growing compilation in parts of a critique of sorts about. While I have posted in the past on Rick Wilson

First up is the seemingly PC firing of Ben Howe, admittedly, one of the only conservatives of the group — for past Tweets. Here is THE WASHINGTON EXAMINERS dealing with this firing:

In a disappointing but ultimately unsurprising turn of events, the Lincoln Project super PAC ousted its stellar video editor Ben Howe over — you guessed it — bad tweets. Howe’s offenses? A few attempts at humor several years ago, some effective, others not, using a handful of crass words related to female anatomy as ways to insult his (usually male) adversaries. None could be interpreted by a reasonable person as attempts to sexualize or objectify women or promulgate sexism, in any real sense of the word.

But Howe, one of the Lincoln Project’s (former) rare staffers who ordinarily has remained civil and retained actual conservatism while criticizing President Trump, is out anyway, leading to one massive question: How the hell is Rick Wilson still there?

Consider this: The top brass at the Lincoln Project essentially is treating Howe worse for calling a man who was cyberbullying conservative radio star Dana Loesch a “twat” and for defending police officer Darren Wilson — a stance the Obama FBI eventually agreed with — than it is treating Wilson, a guy who published photos of a Confederate cooler on his boat.

Unlike Howe, who has remained a critical and sensitive commentator of Trump’s base, especially in his well-researched book The Immoral Majority, Wilson discarded his conservative credentials long ago. His political ideology can be summarized with two simple beliefs: The Republican Party is no longer run by people who like to bomb other nations without impunity or tact, and (2) anyone who still wants to vote for Trump over Joe Biden is so sophomoric that they cannot possibly find Ukraine on a map…..

I have some past posts about Rick Wilson (who is part of the Lincoln Project:

But to catch the reader up with a recent “Rick Wilson flap” is this via CALEB HULL (the “RBe” comment on Caleb’s Tweet is precious!) 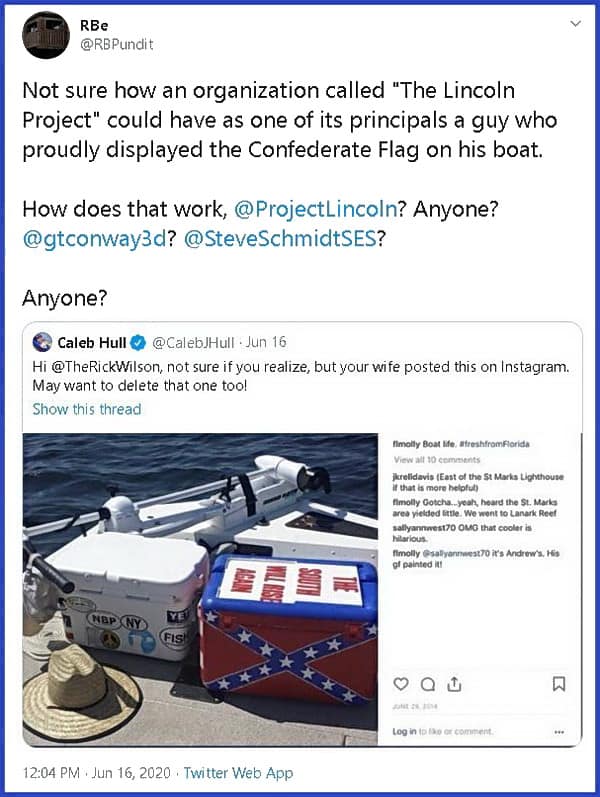 That about sums up the mess of Rick Wilson. He is a pandering talking head who is not conservative in his newest iterations at all. More of “cooler gate” can be seen at TWITCHY. Another excellent article regarding the Lincoln Project comes from THE NEW YORK POST:

WASHINGTON — The founders of the Lincoln Project, a headline-grabbing anti-Trump political action committee formed by GOP operatives who describe the president as a “crook” and “huckster,” have their own checkered dealings with Russia and the tax man, documents obtained by The Post reveal.

Since its inception last November — announced with a blistering New York Times op-ed — the brainchild of George Conway, Steve Schmidt, Rick Wilson and John Weaver has raked in more than $19.4 million, according to FEC filings, and has needled President Trump repeatedly with provocative TV ads.

But the group — which the National Review on Monday dubbed “The Grifter Project” and Sen. John Cornyn (R-Texas) last week dismissed as a “cabal of political consultants all in it for the money” — don’t exactly practice what they preach.

Co-founder Weaver, a political consultant known for his work on John McCain’s and John Kasich’s presidential campaigns, registered as a Russian foreign agent for uranium conglomerate TENEX in a six-figure deal last year, filings with the Department of Justice show.

TENEX’s parent company is Rosatom, a Russian state-owned corporation that also owns Uranium One — the company that paid Bill Clinton $500,000 in speaking fees and millions to the Clinton Foundation after then-President Barack Obama and Secretary of State Hillary Clinton signed off on the controversial merger in 2010.

Weaver backed out of the lobbying gig in May 2019 and called it “a mistake” in a tweet in which he denied having taken any money from TENEX.

Still, that hasn’t stopped him from ironically railing against Trump attorney Rudy Giuliani and his “rogue ties to Putin backed thugs in Ukraine & elsewhere.”

According to IRS filings exclusively obtained by The Post, the Republican operative — who has also repeatedly called Trump a “tax fraud” and a “tax crook” on Twitter — also has an outstanding $313,655 federal tax lien against his Austin, Texas, home.

This March, an Austin shopping mall also filed a lawsuit against the children’s clothing store that Weaver and his wife own, according to court documents obtained by The Post, just months after Weaver mocked the president’s own string of failed businesses.

Weaver’s fellow Lincoln Project founder Wilson also has an interesting financial past. According to IRS documents, the GOP strategist has an outstanding $389,420 federal tax lien against his Tallahassee, Florida, home, and his bank moved to foreclose on the property in 2016.

Wilson, a best-selling author with 1 million Twitter followers, has never disclosed the money woes publicly, allowing him to sneer online about Trump’s decision never to release his own taxes — at one point calling him “Brokeahontas,” despite the fact that American Express had taken Wilson to court for his own unpaid $25,729 credit card bill the year before, documents show…….

Let me repeat some of this in case the IRONY is missed. Okay, the basics via NEWSMAX: “Conway, along with Steve Schmidt, Rick Wilson, and John Weaver, founded the group in November, and have slammed the president with ads ever since.”

…Weaver’s registering as a foreign agent was reported by POLITICO IN MAY OF 2019:

Weaver later cancelled the contract when it was made public and reported on, which definitely isn’t at all suspicious….

…Weaver has money issues as well.

Despite calling Trump a “tax fraud’ and “tax crook” multiple times on Twitter, Weaver has a $313,655 federal tax lien against his home in Austin, Texas.

He also had a lawsuit filed in March against a children’s clothing store he owns with his wife, the Post reported, after Weaver made fund of Trump’s failed businesses….

And this from TOWNHALL noting the “boomerang effect of these lose lips:

….John Weaver, had to register as a Russian agent when lobbying against new sanctions eons ago, so great work on that blindside defense, boys. This comes after the group peddled some ads entirely in Russian, calling Trump “comrade” in a mock endorsement from Vladimir Putin.  Oh, and they thought that fake Russia-Taliban bounty story was real because they did a media spot for that too. But let’s get to the group’s ties to Russia, thanks to Mr. Weaver who was a former adviser to John Kasich, by the way. This was in May of 2019. Michael Duncan of Calvary, a public relations firm and former Mitch McConnell campaign staffer, was one of many who pointed out why this tweet was trash (via Politico):

…Fellow founder Wilson has his own money woes. IRS documents show he has a $389,420 federal tax lien against his home in Tallahassee, Florida, home, and the bank acted to foreclose on it in 2016.

Still, Wilson has mocked Trump for never releasing his own taxes.

He also once called Trump “Brokeahontas” even though he was taken to court by American Express had taken over an unpaid $25,729 credit card bill the previous year….