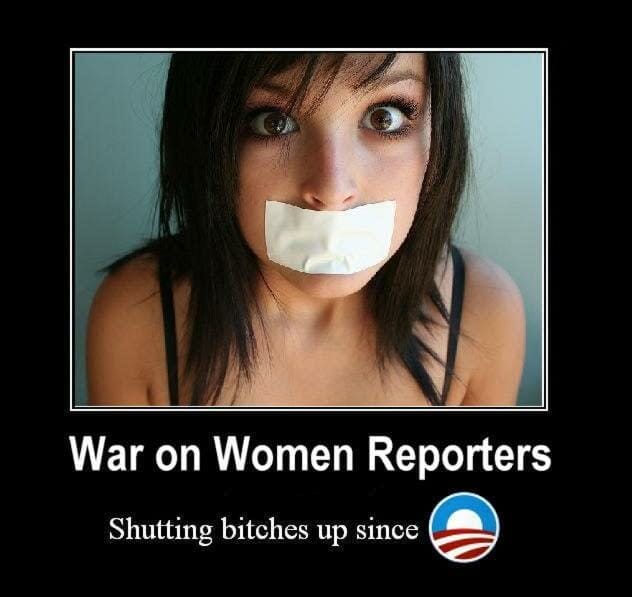 (Via Gateway Pundit) From Atlas Shrugs:

Where are those goosestepping feminazis?

As coverage of last week’s flare-up between Bob Woodward and the White House devolved into the granular parsing of words and implications and extrapolations and possible intent, the larger point was roundly missed: the increasing pressure that White House correspondents feel when dealing with the Obama administration — to follow their narrative, to be properly deferential (!), to react to push-back by politely sitting down and shutting up.

“The whole Woodward thing doesn’t surprise me at all,” says David Brody, chief political correspondent for CBN News. “I can tell you categorically that there’s always been, right from the get-go of this administration, an overzealous sensitivity to any push-back from any media outlet.”

A brief recap: After the Washington Post ran a Woodward op-ed in which he claimed that the administration was “moving the goalposts” on the eve of the potential sequester, the veteran journalist went on to assert that economic adviser Gene Sperling said, in an e-mail, “I think you will regret staking out this claim.”

While Woodward spent a lot of the week on cable news going back and forth on whether that was a threat, few reporters, if any, asked why a high-level administration official spent so much time — Sperling admittedly shouted at Woodward during a 30-minute phone call, followed by that e-mail — attempting to control an opinion expressed in a newspaper.

The answer, say former and current White House correspondents, is simple: This administration is more skilled and disciplined than any other in controlling the narrative, using social media to circumnavigate the press. On the flip side, our YouTube culture means even the slightest gaffe can be devastating, and so you have an army of aides and staffers helicoptering over reporters.

Finally, this week, reporters are pushing back. Even Jonathan Alter — who frequently appears on the Obama-friendly MSNBC — came forward to say he, too, had been treated horribly by the administration for writing something they didn’t like.

“There is a kind of threatening tone that, from time to time — not all the time — comes out of these guys,” Alter said this week. During the 2008 campaign swing through Berlin, Alter said that future White House press secretary Robert Gibbs disinvited him from a dinner between Obama and the press corps over it.

“I was told ‘Don’t come,’ in a fairly abusive e-mail,” he said. “[It] made what Gene Sperling wrote [to Woodward] look like patty-cake.”

“I had a young reporter asking tough, important questions of an Obama Cabinet secretary,” says one DC veteran. “She was doing her job, and they were trying to bully her. In an e-mail, they called her the vilest names — bitch, c–t, a–hole.” He complained and was told the matter would be investigated: “They were hemming and hawing, saying, ‘We’ll look into it.’ Nothing happened.”

Lonely Conservative finishes his point on the story and it is worth noting:

This from the people who ginned up the phone “war on women.” But it still begs the question, why do these reporters put up with this sort of abuse?

I know that this does not need repeating, but if this were a Republican administration, the media would be burning the Commander-in-Chief at the stake. Instead, these tools continue to polish his knob in an advanced case of Stockholm Syndrome. They sacrifice their integrity, their objectivity, and their principles for an enemy administration whose collectivist goals they share.

Any decent American journalist would have run the emails referred to in this article on the front page. But instead, they cover for the Stalinist tactics of the thug in the White House.

This isn’t a one time thing, just remember how they treated Sheyrl Atkisson for her reporting on Operation Fast and Furious.

Ron Suskind lifted the curtain back a bit in 2011 with his book Confidence Men, which ABC reported on then:

President Obama, who rose to power on a message of inclusion and equality, came under fire this week when an author quoted female members of his administration as saying the White House was a sexist and “hostile” work environment.

Since excerpts leaked from the book “Confidence Men,” journalist Ron Suskind’s take on how the Obama administration handled the financial crisis, Anita Dunn, former White House communications director, and Christina Romer, former head of the Council of Economic Advisers, have denied the substance of their remarks and said they were misquoted.

“I felt like a piece of meat,” Romer was quoted in the book as saying of one meeting with Larry Summers, former chairman of the National Economic Council, complaining she was “boxed out” of the discussion.

According to the Washington Post, Dunn says in the book: “This place would be in court for a hostile workplace because it actually fit all of the classic legal requirements for a genuinely hostile workplace to women.”

The two women seemed to briefly open a window on the White House, giving a rare glimpse inside a tightly messaged administration, only to quickly close it. Accusations, however, that Obama favors male staffers have dogged him since his election when reporters noticed he spent critical face time on the basketball court and the golf course exclusively with men.