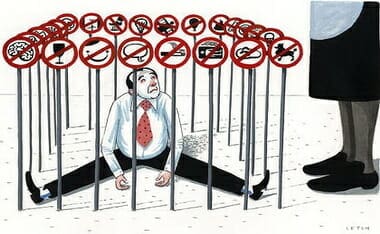 The Federal Government, pushed along by liberal pressure groups, is taking the first steps towards banning the sale of sugary cereals and salt-abundant foods to kids.

To critics, it’s the latest example of “nanny state” overreach by the federal government that could cost money and jobs.

The issue? A proposed set of voluntary guidelines backed by the Obama administration designed to limit the marketing of junk food to children through mascots like “Tony the Tiger,” the smiling animated figure used for decades to sell Kellogg’s “Frosted Flakes” breakfast cereal. Under the guidelines, companies would only be able to advertize and promote healthy foods low in fat, sugar…

Professor Walter Williams described these “Do Gooders” as lifestyle Nazis. CS Lewis aptly talked about his fear of such people:

Of all tyrannies, a tyranny exercised for the good of its victims may be the most oppressive. It may be better to live under robber barons than under omnipotent moral busybodies. The robber baron’s cruelty may sometimes sleep, his cupidity may at some point be satiated; but those who torment us for our own good will torment us without end for they do so with the approval of their own conscience. They may be more likely to go to Heaven yet at the same time likelier to make a Hell of earth. Their very kindness stings with intolerable insult. To be ‘cured’ against one’s will and cured of states which we may not regard as disease is to be put on a level of those who have not yet reached the age of reason or those who never will; to be classed with infants, imbeciles, and domestic animals.

The government will demand the following to be placed on cigarette packs (forcing private business to place gruesome photos on their product:

That, however, is not my main focus. What I do wish to zero in on is what causes the secular left does go to the mat/floor for. That is, the above at the Federal level is kosher… the below at the local level is not! That is, to ban simple labels inserted into biology textbooks simply warning the school children about the monolithic view taught in their science classes [in regards to origin science, not working science] in a small label inserted into their biology textbooks:

How is this argument misconstrued with straw-men and non-sequiturs? Here is a great example that comes from an evolutionary website, first the person posts this graphic equating ID to the following: Did you notice the lumping in of Neo-Darwinian THEORY with laws of science and effects that are repeatable, observable? The author contunues down the non-sequitur road creating a straw-man and then defeating it, not the real argument:

How long does this fight need to go on? Do we need to teach the “strengths and weaknesses” of the theory of gravity? That’s right. That’s all it is. A theory. But I don’t see any creationists defiantly jumping off cliffs.

One commentator also hops in and says something that is truly amazing and shows you the depths of non-thinking in regards to this topic:

The world is flat, the moon landing was a hoax, global warming is not real, and intelligent design is true. Amazing what some people will resort to, just to avoid facing the truth and questioning their beliefs or their lifestyles.

All I have to say is “WOW!” Which brings me to the god centered vacuum that man tries to fill with himself. And this is the bottom line, do you want to give ultimate credence to The Designer, or the creature:

For although they knew God, they did not honor him as God or give thanks to him, but they became futile in their thinking, and their foolish hearts were darkened. Claiming to be wise, they became fools, and exchanged the glory of the immortal God for images resembling mortal man and birds and animals and creeping things.

I would hope, to rightly understand what Intelligent Design theorists ARE saying, one would take the time to read the small portion entitled “The Golden Arm,” posted after an atheists point about ID:

The events were moderated by MSNBC personalities Joe Scarborough, Mika Brzezinski, Dylan Ratigan, and Michael Smerconish. If Fox News seemed to be associated with the Tea Party, then No Labels was an MSNBC affair….

Marooned in Marin picked up this story as well, and here I post some commentary by Marin:

But when you look at the people involved in No Labels, all you have to do is say “liberal.” Michael Bloomberg, Kristen Gillibrand, Charlie Crist, Mike Castle. All joined by alleged conservatives like David Brooks, Joe Scarboring and the contemptable David Frum.

Nice Deb even compares the mission statements of No Labels with the failed Coffee Party.

So what is No Labels? It is liberalism trying to reinvent itself. And wouldn’t you know? The cries about “hyperpartisanship” always happen when conservatism (via the Tea Party) is on the rise and stands up against liberalism.

I’m not fooled for a minute.