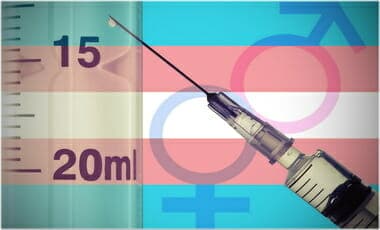 This comes via the HERITAGE FOUNDATION:

Here is more about this from THE CHRISTIAN POST

WASHINGTON — Medical doctors and a mom of a trans-identifying child are urging the government to shut down medical operations that are harming children.

Their efforts to resist the medicalization of gender has led them to discover that government-funded research now allows wrong sex hormones such as testosterone to be given to girls as young as 8.

At a Thursday panel at the Heritage Foundation, a conservative think tank, Dr. Michael Laidlaw addressed the medical harms of hormonal treatments and surgical interventions being performed on young people who believe they are the opposite sex. Doctors administering these treatments are advocating these harmful practices on increasingly younger children, he explained.

Today, medical scenarios such as girls as young as 13 and 14 undergoing double mastectomies and 17-year-old boys with penises of 9-year-olds, developmentally speaking, because of chemical puberty blockers, are now showing up, Laidlaw, a Rocklin, California-based endocrinologist, explained in his remarks.

To date, hormone blockers such as Lupron, which is used to treat both prostate cancer patients and children with precocious puberty, has never been through an FDA-approval process for the purpose of blocking normal puberty, and is prescribed off-label. Laidlaw refers to puberty blockers as a form of “chemical conversion therapy” and noted that the largest professional association for endocrinologists, The Endocrine Society, now recommends delaying puberty in gender dysphoric youth at Tanner stage 2, which is soon after the pubertal signals in the brain begin to occur.

The reason that Jazz Jennings, transgender star of the TLC series “I am Jazz,” has reportedly never had any sexual sensations or orgasms is because his natural puberty was halted at this stage and was not allowed to occur, the California doctor explained. These puberty-blocking drugs also disrupt normal brain and bone development, putting kids at future risk of osteoporosis, he said.

In England, Oxford professor Michael Biggs discovered through a freedom of information request that at the Tavistock gender clinic, children reported greater self-harm with these particular medications, and girls exhibited greater emotional problems and dissatisfaction with their bodies, Laidlaw noted.

“Now you’d think if you had these side effects of these medications, wouldn’t you want to stop?” Laidlaw asked.

During his presentation, he played video clips of two doctors active in the medical transitioning of children, Ilana Sherer and Johanna Olson-Kennedy.

Sherer explained that puberty blockers are given to children at age 8 or 9, when they are in third and fourth grades. Olson-Kennedy is doing a 5-year study, for which she has received a $5.7 million National Institutes of Health research grant, and in one of her publications, it shows that mastectomies have been done on girls as young as 13. In the clip Laidlaw showed, Olson-Kennedy is seen on tape insisting adolescents have the capacity to make life-altering decisions, including to have their breasts removed….