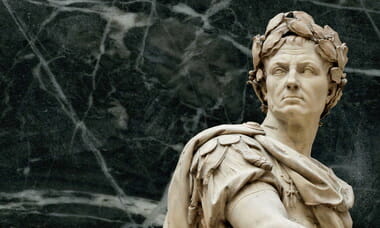 (There are other videos in the above series)

Following is an excerpt from a slightly larger article entitled, “Sources for Caesar and Jesus Compared,” where scholar and professor, Darrell L. Bock*, explains quickly the manuscript integrity in the New Testament. I would even push it further back myself (see my post detailing the differences in Buddhist Scripture and Biblical Scripture).

Tracing ancient history is about examining sources and the manuscripts behind them, as well as the nature of their content and claims. In regard to Julius Caesar, the key sources are his own accounts of the Gallic Wars, the speeches of Cicero, Sallust’s account of Catiline’s War, Suetonius’s section on Caesar in Twelve Caesars, and Plutarch’s section on Caesar in Plutarchs’s Lives.

In some ways, Caesar’s autobiographical account gives us more to consider than the accounts of Jesus do. It provides direct testimony about events Caesar participated in. Sallust and Cicero were Caesar’s contemporaries as well, so there are reliable outside sources closely tied to the time of these events. Two of the most important sources for the emperor’s life, however, Suetonius and Plutarch, write in the early second century. That’s more than 100 years after the time of Caesar.

Manuscript support lies behind these sources. And this is where things get especially interesting. Around 12 manuscripts are essential for determining the wording of Caesar’s account. The oldest manuscript is from the ninth century—a full 900 years removed from the actual events. The list extends to manuscripts from the 12th century. Cicero’s speeches have an even older pedigree. They have about 15 manuscripts ranging from AD 400 to 800. Sallust’s account has around 20 manuscripts from the 10th and 11th centuries.Plutarch’s Lives is also mostly divided across six key manuscripts that range from the 10th and 11th centuries. Suetonius’s manuscript is dated AD 820. Classics scholars build much of our understanding of Caesar around these sources, even though their manuscript traditions contain significant gaps of time.

Gospel authorship is also debated. Conservatives argue the apostles Matthew and John are the sources of the Gospels under their names. If so, this is like Sallust’s and Cicero’s accounts in which the authors are contemporaries of the figure being chronicled. The other two Gospels are also traditionally tied to apostles—Mark uses Peter as a source and Luke uses Paul. This is a well-established tradition tied to Papias in the early second century. Once again, this contemporary link is what we see with Sallust and Cicero. Even if one severs those links with a less conservative reading, authorship remains tied to contemporary figures. Add the corporate and oral nature and role of the Gospels and we have good reason—purely on secular grounds—to regard the traditions we have of Jesus. Our sources give us a solid core for understanding him. Ken Bailey’s essay “Informal Controlled Oral Tradition and the Synoptic Gospels,” James Dunn’s Jesus Remembered, my own and Robert Webb’s edited work Key Events in the Life of the Historical Jesus, and Robert McIver’s Memory, Jesus, and the Synoptic Gospels make this case in detail.

What about the manuscripts? Here the New Testament is far superior to its classical companions. Our earliest manuscripts start appearing within decades of the writing. The fragment p52 is dated around AD 125. It only has a few portions of John 18, but it starts a trail that has full manuscripts of the Gospels appearing by the fourth century. The number of Greek manuscripts we have of the New Testament up to the time of the printing press is more than 5,800. The wording of the New Testament, including the Gospels, is extremely solid. Unclear spots often appear with an “or” note in Bible margins that record such differences. Yet none of those differences affects any core doctrinal teaching of Christianity. The only thing affected is how many verses make that teaching point.

So we can see the Gospels compare favorably to the classics in terms of what the sources say about Jesus and Caesar. If such sourcing works for the classics and the study of Caesar, it should work for Jesus as well….

* Darrell L. Bock is senior research professor of New Testament and executive director for cultural engagement at Dallas Theological Seminary. He has authored or edited more than 30 books, including