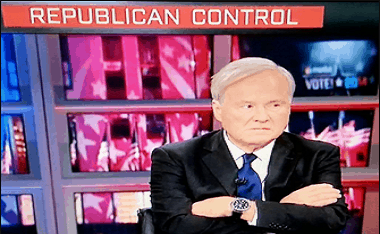 A “Special Report” panel tonight weighed in on the results of the 2014 midterm election and President Barack Obama’s response to it.

Mara Liasson, of NPR, called last night’s results a wave, saying that all big races broke in one direction.

”I think there’s a lot of searching through the rubble for lessons for Democrats today about why they weren’t able to hold onto more,” she said.

Meanwhile, Republicans actually “went to school and fixed some problems.”

Charles Krauthammer then discussed how Obama declined to “read the tea leaves on election results.”

“This was the worst, wall-to-wall, national, unmistakable, unequivocal shellacking that you will ever see in a midterm election […] this is a wall-to-wall rejection of Obamaism.”

While this looks impressive… remember, Reagan got 49 states his second term, and lost his opponents home state by about 3,000 votes or so. So I wanna see a candidate for 2016 that will inspire the same thinking. (Click map to enlarge)

I recently post on my FaceBook my “states in the red category” prediction in November (*not* the map above). One friend wrote that:

Which is true, I am going big, granted. But the following is my small “booster” for the conservative at heart — even if it is fleeting:

I will give you some indicators… but mind you… I am going BIG and will most likely be wrong. But I am confident that we will win:

★  Flashback: Gallup Had Carter Up 4 Points Over Ronald Reagan in September 1980
http://tinyurl.com/9xwbr64

I was thinking it was only a 4% lead that Carter had… in fact, three weeks BEFORE the election Carter rose to 47% and Reagan dropped to 39%! Remember, Reagan took 44-States, he blew Carter out of the water! Then doc Rove shows the lopsided polls in regards to Democrats and Republicans. WOW!

★   Evidence that polls are skewed RIGHT NOW:
http://tinyurl.com/8hy6e56
★   Based upon economic indicators and other supporting data, the Bickers and Berry model has never missed a prediction since 1980.
http://tinyurl.com/9d9efgd
★   I have two stories on scads of Democrats becoming Republican (see both):
https://religiopoliticaltalk.com/tag/democrats-switching-parties/
★   We won 700 elected seats in 2012 — a record set (with switches to our party, way over 700):
https://vimeo.com/album/203863/video/16554880
★   Black Pastors Break With Obama On Gay Marriage
http://youtu.be/ELfFz3S5k-Q (see also: http://tinyurl.com/cao4l46)
★   Anti-Obama ‘2016’ Now Second Biggest Documentary in Film History (the “Michael Moore” effect)
http://www.breitbart.com/Big-Hollywood/2012/09/09/2016-second-biggest-doc

(Click above graphic to enlarge: h/t to Gay Patriot)

Some people see that “God” and “Jerusalem” (the Jewish vote) being re-added (wrongly I might add) is a BIG deal. So the black vote and the Jewish vote will change a bit. Others see the emphasis on abortion at the DNC this year (See for instance: http://tinyurl.com/8w7olch). It was pushed incessantly, and because of Akin, others have heard Obama’s voting record on infanticide. So the women vote will change. Still others note the odd line-up of speakers:

A man who was accused by 15-women of either unwanted sexual advances or rape, Bill Clinton (yeah, Republican war on women); A women who in one breath will say “keep government out of my bedroom,” but then in the next want government to pay for her contraception via acts in the bedroom… who also wants government to pay for sex-change operations, Sandra Fluke (radical genderist); A women caught lying about her ancestry and stories from it, Elizabeth Warren (Obama also falsely tied himself to Native-American ancestry); A racist involved deeply in what would be the White Pride movement if he were white… and has close ties to the Chicano version of the KKK, who’s mom founded both movements in her town (chapters of, so-to-speak), Julian Castro (for some reason Democrats think you cannot be racist if a minority, see: http://tinyurl.com/99ua58z).

So moderates and independents are going to vote a bit more for the RR2. These are just a few reasons to be optimistic… but maybe not as much as me.

The Magic Is Gone:

The most recent WaPo/ABC POLL has Obama up by 1-point Dem/Repub/Indie split is 35/26/33, respectively.

A poll from a month or so ago by CBS/NYT had Obama up and Democrats polled at 9% more. My boss came in one day and said Romney was down 10-points in Ohio… the Democrats were sampled at 35%, and Republicans at 27%. So while the race is close in swing-states, it IS close, and swaying to Romney.

So when Romney and the Left is surprised by it… you know why… they trust the Legacy Media.

The bipartisan Battleground Poll, in its “vote election model,” is projecting that Mitt Romney will defeat President Obama 52 percent to 47 percent. ~ Weekly Standard

“Romney currently leads Obama 52 percent to 45 percent among voters who say they have already cast their ballots,” Gallup reported. “However, that is comparable to Romney’s 51 percent to 46 percent lead among all likely voters in Gallup’s Oct. 22-28 tracking polling.” ~ Gallup

Very early on, before this campaign started in earnest, live or die, I publicly cast my lot with Gallup and Rasmussen. As a poll addict going back to 2000, these are the outlets that have always played it straight. It’s got nothing to do with politics and everything to do with credibility and not wanting to kid myself. So when an outlet like Gallup tells me Romney is up seven-points, 52-45%, among those who have already voted, that’s very big news.

Just as Gallup did with their bombshell survey showing that 2012 is looking like a year where Republicans will enjoy a record three-point turnout advantage over Democrats (a ten-point shift from 2008), for whatever reason, they buried the lede with this latest bombshell, as well. When you consider the fact that the CorruptMedia’s been talking for weeks about how Obama’s crushing Romney in early voting, you would think Gallup proving that Narrative a big fat phony lie would be news. Instead, though, they bury this explosive news at the bottom of a piece headlined: “In U.S., 15% of Registered Voters Have Already Cast Ballots“.

Except waaaaay at the bottom we learn this:

Thus far, early voters do not seem to be swaying the election toward either candidate.

Romney currently leads Obama 52% to 45% among voters who say they have already cast their ballots. However, that is comparable to Romney’s 51% to 46% lead among all likely voters in Gallup’s Oct. 22-28 tracking polling. At the same time, the race is tied at 49% among those who have not yet voted but still intend to vote early, suggesting these voters could cause the race to tighten. However, Romney leads 51% to 45% among the much larger group of voters who plan to vote on Election Day, Nov. 6.

When Gallup says early voters don’t seem to be swaying the election, presumably what they means is that because Romney is ahead by five points nationally, an early voting advantage of seven-points isn’t going to “sway the election.”

The Ohio poll (Cincinnati Enquirer/Ohio News Organization Poll) that has the 49% vs. the 49% close race, is a great example of what I have been talking about here-and-there about the disparity of proper representation of Party affiliates in these polls. For instance, in the poll used by many to show the tie, here is the breakdown:

We know that Independents are tracking more with the Republicans this year, about 54 percent (R/R) to 40 percent (O/B). And of course the difference is obvious in Democrat/Republican, as shown above. If there were a more even sampling between all three… Romney would be up, and by a few percentage points!

Likewise, the Minnesota poll that shows a statistical dead-heat is broke down thusly:

NOW, the important part for my California readers. Yes, this state will go blue… but it is a duty for all Republicans to vote. Why? Because I believe that we will win this election, but a larger popular vote win will give R/R a moral high road for their agenda. The wider the gap the better.

Okay, the Gravis Marketing Poll (Ohio) which has Obama up 1 in Ohio ~ 50 Obama, 49 Romney… Dems are sampled 8% more (also remember Independents are going for Romney in larger numbers). Here is how the poll breaks down:

PPP’s newest Ohio poll finds Barack Obama leading Mitt Romney 51-47, up from a 49-48 margin a week ago. How does this newest poll break down?

The Washington Post-ABC News Poll has Romney at 49, Obama 48. Here is the break down:

Rasmussen has Romney at 49% and Obama at 47% — nation wide average. I can never find the in-depth breakdown… I think you have to be a paying member to do so. At any rate, here is one of their articles in part:

In the 11 swing states, Mitt Romney earns 50% of the vote to Obama’s 46%. Two percent (2%) like another candidate in the race, and another two percent (2%) are undecided.

Romney has now led for 11 straight days with margins of four to six points most of that time.

In 2008, Obama won these states by a combined margin of 53% to 46%, virtually identical to his national margin.

Nationally, Romney remains at the 50% level of support in the Rasmussen Reports daily Presidential Tracking Poll….

Its all about the swing states!

The latest Rasmussen Reports telephone survey of Likely Ohio Voters shows Romney with 50% support to President Obama’s 48%. One percent (1%) likes some other candidate, while another one percent (1%) remains undecided.

And, from the Weekly Standard:

The bipartisan Battleground Poll, in its “vote election model,” is projecting that Mitt Romney will defeat President Obama 52 percent to 47 percent. The poll also found that Romney has an even greater advantage among middle class voters, 52 percent [Romney] to 45 percent [Obama].

While Obama can close the gap with a strong voter turnout effort, “reports from the field would indicate that not to be the case, and Mitt Romney may well be heading to a decisive victory,” says pollster Ed Goeas.

Should Romney win by 5 percentage points, it would increase Republican chances of gaining control of the Senate. His coattails would help elect GOP Senate candidates in Virginia, Wisconsin, Ohio, Pennsylvania, and Florida. “Republicans are now certain to hold the House,” Goeas said, “regardless of how the presidential race turns out.”

The poll’s election model takes into account variables including voter intensity, age, and education, and voters who are certain in their vote. The race “remains very close in the surface,” Goeas said, “but the political environment and the composition of the likely electorate favor Governor Romney.”

The projected outcome by the Battleground Poll is close to that of the Gallup Poll. Last week, Gallup said Romney leads Obama 49 percent to 46 percent in its model of the electorate’s composition on November 6.

The Battleground Poll is conducted by Goeas of the Tarrance Group and Celinda Lake of Lake Research Partners. Goeas is a Republican, Lake a Democrat. The survey is affiliated with Politico and George Washington University.

Taken last week, the poll found that only 37 percent of voters believe the country is headed in the right direction. For an incumbent president to win reelection, that number normally must exceed 40 percent. “Everyone but the core Democratic constituencies holds the strongly held feeling that the country is off on the wrong track,” Goeas said.

For the first time this year, Romney has a majority favorable image. His favorability rating is 52 percent, Obama’s is 51 percent. According to the poll, Romney is viewed favorably by a majority of independents (59 percent), seniors (57), married voters (61), moms (56), college graduates (54), middle class voters (56), and middle class families (61).