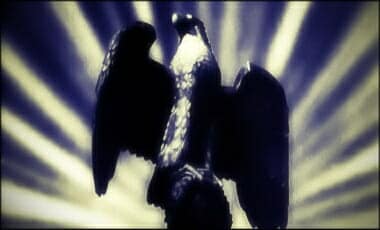 (See also “The Secret Wartime Report on the Mind of Hitler.”) While reading another book, I came across some smaller excerpts, of which I include slightly larger swaths of (getting a used edition of the 1940 book, The Voice of Destruction, it has to do with an expansion of how Hitler viewed the Church as well as what could be understood as demonic episodes:

Our nocturnal conversation arose out of our anxieties regarding such a development. The two Bavarian Gauleiter, Streicher of Franconia and Wagner of Munich, had brought us the tale. It was Streicher who gave Hitler his cue in the conversation. I had not listened to the beginning of it and became attentive only when I heard Hitler’s voice behind me getting louder.

“The religions are all alike, no matter what they call themselves. They have no future—certainly none for the Germans. Fascism, if it likes, may come to terms with the Church. So shall I. Why not? That will not prevent me from tearing up Christianity root and branch, and annihilating it in Germany. The Italians are naïve; they’re quite capable of being heathens and Christians at the same time. The Italians and the French are essentially heathens. Their Christianity is only skin-deep. But the German is different. He is serious in everything he undertakes. He wants to be either a Christian or a heathen. He cannot be both. Besides, Mussolini will never make heroes of his Fascists. It doesn’t matter there whether they’re Christians or heathens. But for our people it is decisive whether they acknowledge the Jewish Christ-creed with its effeminate pity-ethics, or a strong, heroic belief in God in Nature, God in our own people, in our destiny, in our blood.”

After a pause, he resumed:

“Leave the hair-splitting to others. Whether it’s the Old Testament or the New, or simply the sayings of Jesus, according to Houston Stewart Chamberlain—it’s all the same old Jewish swindle. It will not make us free. A German Church, a German Christianity, is distortion. One is either a German or a Christian. You cannot be both. You can throw the epileptic Paul out of Christianity—others have done so before us. You can make Christ into a noble human being, and deny his divinity and his role as a savior. People have been doing it for centuries. I believe there are such Christians today in England and America—Unitarians they call themselves, or something like that. It’s no use, you cannot get rid of the mentality behind it. We don’t want people who keep one eye on the life in the hereafter. We need free men who feel and know that God is in themselves.”

Streicher or Goebbels made some remark which I did not catch—a question perhaps.

“You can’t make an Aryan of Jesus, that’s nonsense,” Hitler went on. “What Chamberlain wrote in his Principles is, to say the least, stupid. What’s to be done, you say? I will tell you: we must prevent the churches from doing anything but what they are doing now, that is, losing ground day by day. Do you really believe the masses will ever be Christian again? Non­sense! Never again. That tale is finished. No one will listen to it again. But we can hasten matters. The parsons will be made to dig their own graves. They will betray their God to us. They will betray anything for the sake of their miser­able little jobs and incomes.

“What we can do? Just what the Catholic Church did when it forced its beliefs on the heathen: preserve what can be preserved, and change its meaning. We shall take the road back: Easter is no longer resurrection, but the eternal renewal of our people. Christmas is the birth of our savior: the spirit of heroism and the freedom of our people. Do you think these liberal priests, who have no longer a belief, only an office, will refuse to preach our God in their churches? I can guarantee that, just as they have made Haeckel and Darwin, Goethe and Stefan George the prophets of their Christianity, so they will replace the cross with our swastika. Instead of worshiping the blood of their quondam savior, they will worship the pure blood of our people. They will receive the fruits of the German soil as a divine gift, and will eat it as a symbol of the eternal communion of the people, as they have hitherto eaten of the body of their God. And when we have reached that point, Streicher, the churches will be crowded again. If we wish it, then it will be so—when it is our religion that is preached there. We need not hurry the process.”

I cannot judge whether Hitler is near madness in the clinical sense. My own experience of him and what I have learned from others indicate a lack of control amounting to total demoralization. His shrieking and frenzied shouting, his stamping, his tempests of rage—all this was grotesque and unpleasant, but it was not madness. When a grown-up man lashes out against the walls like a horse in its stall, or throws himself on the ground his conduct may be morbid, but it is more certainly rude and undisciplined.

Hitler, however, has states that approach persecution mania and dual personality. His sleeplessness is more than the mere result of excessive nervous strain. He often wakes up in the middle of the night and wanders restlessly to and fro. Then he must have light everywhere. Lately he has sent at these times for young men who have to keep him company during his hours of manifest anguish. At times these conditions must have become dreadful. A man in the closest daily association with him gave me this account: Hitler wakes at night with convulsive shrieks. He shouts for help. He sits on the edge of his bed, as if unable to stir. He shakes with fear, making the whole bed vibrate. He shouts confused, totally unintelligible phrases. He gasps, as if imagining himself to be suffocating.

My informant described to me in full detail a remarkable scene—I should not have credited the story if it had not come from such a source. Hitler stood swaying in his room, looking wildly about him. “He! He! He’s been here!” he gasped. His lips were blue. Sweat streamed down his face. Suddenly he began to reel off figures, and odd words and broken phrases, entirely devoid of sense. It sounded horrible. He used strangely composed and entirely un-German word-formations. Then he stood quite still, only his lips moving. He was massaged and offered something to drink. Then he suddenly broke out—

He stamped and shrieked in the familiar way. He was shown that there was nothing out of the ordinary in the room, and then he gradually grew calm. After that he lay asleep for many hours, and then for some time things were durable.

There is an instructive parallel—mediums. Most of these are ordinary, undistinguished persons; yet suddenly they ac­quire gifts that carry them far above the common crowd. These qualities have nothing to do with the medium’s own personality. They are conveyed to him from without. The medium is possessed by them. He, himself, however, is un­influenced by them. In the same way undeniable powers enter into Hitler, genuinely daemonic powers, which make men his instruments. The common united with the uncom-mon—that is what makes Hitler’s personality so desperate a puzzle to those who come into contact with him. Dostoevsky might well have invented him, with the morbid derangement and the pseudo-creativeness of his hysteria.

I have frequently heard men confess that they are afraid of him, that they, grown men though they are, cannot visit him without a beating heart. They have the feeling that the man will suddenly spring at them and strangle them, or throw the inkpot at them, or do something senseless.