Here is another book speaking to what could be considered demonic forces at work in Hitler’s life. Earlier I posted an episode witnessed that also hints at that: Some of Hitlers Demonic Episodes Penned In a 1940 Book

Hitler’s guide is something different entirely. It seems certain that Hitler believes that he has been sent to Germany by Providence and that he has a particular mission to perform. He is probably not clear on the scope of this mission beyond the fact that he has been chosen to redeem the German people and reshape Europe. Just how this is to be accomplished is also rather vague in his mind, but this does not concern him greatly because an “inner voice” communicates to him the steps he is to take. This is the guide that leads him on his course with the precision and security of a sleepwalker.

I carry out the commands that Providence has laid upon me. 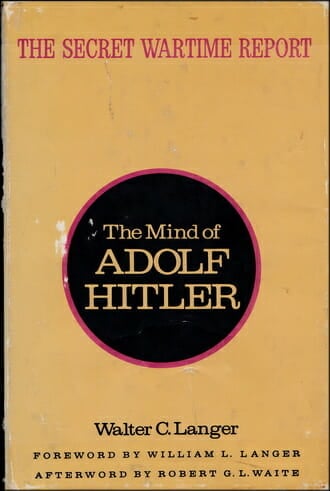 No power on earth can shake the German Reich now, Divine Providence has willed it that I carry through the fulfillment of the Germanic task.

But if the voice speaks, then I know the time has come to act.

It is this firm conviction that he has a mission and is under the guidance and protection of Providence that is responsible in large part for the contagious effect he has had on the German people.

Many people believe that this feeling of destiny and mission have come to Hitler through his successes. This is probably false. Later in our study (Part V) we will try to show that Hitler has had this feeling for a great many years although it may not have become a conscious conviction until much later. In any case it was forcing its way into consciousness during the last war and has played a dominant role in his actions ever since. Mend (one of his comrades), for example, reports: “In this connection a strange prophecy comes to mind: Just before Christmas (1915) he commented that we would at sometime hear a lot from him. We had only to wait until his time had come.” Then, too, Hitler has reported several incidents during the war that proved to him that he was under Divine protection. The most startling of these is the following:

I was eating my dinner in a trench with several comrades. Sud­denly a voice seemed to be saying to me, “Get up and go over there.” It was so clear and insistent that I obeyed automatically, as if it had been a military order. I rose at once to my feet and walked twenty yards along the trench carrying my dinner in its tin can with me.

Then I sat down to go on eating, my mind being once more at rest. Hardly had I done so when a flash and deafening report came from the part of the trench I had just left. A stray shell had burst over the group in which I had been sitting, and every member of it was killed.

Then, also, there was the vision he had while in hospital at Pasewalk suffering from blindness allegedly caused by gas. “When I was confined to bed, the idea came to me that I would liberate Germany, that I would make it great. I knew immediately that it would be realized.”

These experiences must later have fit in beautifully with the views of the Munich astrologers, and it is possible that, under­neath, Hitler felt that if there was any truth in their predictions they probably referred to him.