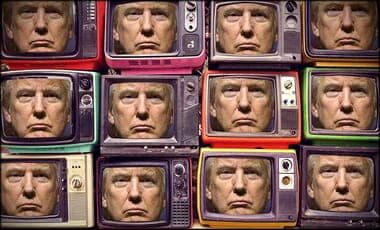 Here are two examples of CNN’s Alisyn Camerota trying to fish out some negativity towards Trump. One with a panel of persons regarding Trump’s Charlottesville response. The other a Goldstar mom after the “call indecent“…

(Above) CNN featured a panel of six Trump supporters (three men, three women) Wednesday morning and despite host Alisyn Camerota’s surprise, they all defended the president and expressed their distrust of the media. (DAILY CALLER)

(Above) That’s the thing about Gold Star families. It’s not about politics to them. They just want their brave relative to be remembered. They don’t all need a call. They don’t all even care about that. Alisyn Camerota really needs to get it together. This is like the millionth time she has had someone on TV with the goal of bashing Trump and it has backfired. (AMERICAN NEWS)

Here is another example similar to the above that is the reason more-and-more people are going to vote GOP next Presidential election. The Democratic (DNC) Chairman Tom Perez said the following:

All these posts by people from the Left on social media, leaders in the Democrat Party, and the Media Complex, calling into question motives of regular people — as they relegate any disagreement as based in white supremacy, racism, bigotry, or some phobia… all they are doing is chasing people to the GOP.

My suggestion to the media and others is to do what former former NPR CEO Ken Stern did (NEW YORK POST)… get out of the New York, D.C. bubble and know the audience you are speaking of.

Most reporters and editors are liberal — a now dated Pew Research Center poll found that liberals outnumber conservatives in the media by some 5 to 1, and that comports with my own anecdotal experience at National Public Radio. When you are liberal, and everyone else around you is as well, it is easy to fall into groupthink on what stories are important, what sources are legitimate and what the narrative of the day will be.

This may seem like an unusual admission from someone who once ran NPR, but it is borne of recent experience. Spurred by a fear that red and blue America were drifting irrevocably apart, I decided to venture out from my overwhelmingly Democratic neighborhood and engage Republicans where they live, work and pray. For an entire year, I embedded myself with the other side, standing in pit row at a NASCAR race, hanging out at Tea Party meetings and sitting in on Steve Bannon’s radio show. I found an America far different from the one depicted in the press and imagined by presidents (“cling to guns or religion”) and presidential candidates (“basket of deplorables”) alike.

I spent many Sundays in evangelical churches and hung out with 15,000 evangelical youth at the Urbana conference. I wasn’t sure what to expect among thousands of college-age evangelicals, but I certainly didn’t expect the intense discussion of racial equity and refugee issues — how to help them, not how to keep them out — but that is what I got.

At Urbana, I met dozens of people who were dedicating their lives to the mission, spreading the good news of Jesus, of course, but doing so through a life of charity and compassion for others: staffing remote hospitals, building homes for the homeless and, in one case, flying a “powered parachute” over miles of uninhabited jungle in the western Congo to bring a little bit of entertainment, education and relief to some of the remotest villages you could imagine. It was all inspiring — and a little foolhardy, if you ask me about the safety of a powered parachute — but it left me with a very different impression of a community that was previously known to me only through Jerry Falwell and the movie “Footloose.”

Early this year, I drove west from Houston to Gonzales, Texas, to try my hand at pig hunting. It was my first time with a gun, and the noticeably concerned owner of the ranch at first banished me to a solitary spot on the grounds. Here, he said, the pigs would come to me and I could not pose a danger to anyone else. It was a nice spot indeed but did not make for much of a story, so I wandered off into the woods, hopefully protected by my Day-Glo hunting vest.

I eventually joined up with a family from Georgia. The group included the grandfather, Paps, and the father, CJ, but it was young Isaac, all of 8 years old, who took on the task of tutoring me in the ways of the hunt. He did a fine job, but we encountered few pigs (and killed none) in our morning walkabout. In the afternoon, with the Georgians heading home, I linked up with a group of friends from Houston who belied the demographic stereotyping of the hunt; collectively we were the equivalent of a bad bar joke: a Hispanic ex-soldier, a young black family man, a Serbian immigrant and a Jew from DC.

None of my new hunting partners fit the lazy caricature of the angry NRA member. Rather, they saw guns as both a shared sport and as a necessary means to protect their families during uncertain times. In truth, the only one who was even modestly angry was me, and that only had to do with my terrible ineptness as a hunter. In the end though, I did bag a pig, or at least my new friends were willing to award me a kill, so that we could all glory together in the fraternity of the hunt.

I also spent time in depressed areas of Kentucky and Ohio with workers who felt that their concerns had long fallen on deaf ears and were looking for every opportunity to protest a government and political and media establishment that had left them behind. I drank late into the night at the Royal Oaks Bar in Youngstown and met workers who had been out of the mills for almost two decades and had suffered the interlocking plagues of unemployment, opioid addiction and declining health. They mourned the passing of the old days, when factory jobs were plentiful, lucrative and honored and lamented the destruction and decay of their communities, their livelihoods and their families. To a man (and sometimes a woman), they looked at media and saw stories that did not reflect the world that they knew or the fears that they had.

Over the course of this past year, I have tried to consume media as they do and understand it as a partisan player. It is not so hard to do. Take guns. Gun control and gun rights is one of our most divisive issues, and there are legitimate points on both sides. But media is obsessed with the gun-control side and gives only scant, mostly negative, recognition to the gun-rights sides…..

….None of this justifies the attacks from President Trump, which are terribly inappropriate coming from the head of government. At the same time, the media should acknowledge its own failings in reflecting only their part of America. You can’t cover America from the Acela corridor, and the media need to get out and be part of the conversations that take place in churches and community centers and town halls.

I did that, and loved it, though I REGRET WAITING UNTIL WELL AFTER I LEFT NPR TO DO SO. I am skeptical that many will do so, since the current situation in an odd way works for Trump, who gets to rile his base, and for the media, which has grown an audience on the back of Washington dysfunction. In the end, they are both short-term winners. It is the public that is the long-term loser.