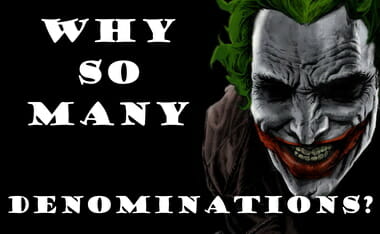 I was recently in a conversation and was challenged with a long litany of items. This is a common tactic of atheists. Not camping on a single topic and dealing with it well. Rather they have a myriad of points combined that they think are sound, which is why I often choose on from their long screed to show them that in similar fashion when each statement is looked at and dealt with properly you often find straw-men, non-sequiturs, of category mistakes. Here is an example:

I thought I responded to this in the past… but after searching through my Word docs and my sites… I have not in fact posted responses to this challenge. So here I wish to do just that. But first, I want to define myself, and what “I am”

I am broadly a theist, which is a theological system which postulates a transcendent God who is the creator of the universe, an immanent God who sustains it, and a personal God who is able to communicate with and redeem his creation. Christian theism is … monotheistic.  I vigorously defend the theistic worldview as well as showing the inequities and the self-refuting nature of the opposing worldviews such as pantheism, panantheism, atheism, and polytheism.

Then I am rightly considered within the Protestantism tradition or movement.  Protestantism is considered the second wave of Christianity, that broke away from the Roman Catholic Church in Europe in the sixteenth and seventeenth centuries.  Its name is derived from Protestatio, a statement issued by 5 reforming princes and 14 cities of the Holy Roman Empire at the Diet of Spayer in 1529.  The term Protestatio did not imply a mere protest, but a confession.  For the early Reformers, Protestantism was not so much a revolution as a revival of the faith and practices of the early church.

The five marks of the Protestant Church may not apply to all churches falling under this rubric, but they express the driving theological convictions of the early Reformers:

Protestant denominations number in the thousands, and vary widely in structure, theology, and forms of worship.  Some denominations are close to Catholic and Orthodox traditions, and others are close to Unitarianism.  The eight principle streams of modern Protestantism are Episcopal or Anglican, Methodist, Presbyterian (including Calvinist or Reformed), Lutheran, Congregational, Baptist, Holiness, and Pentecostal.  Within each of these denominations there are warring liberal and conservative or evangelical factions that sometimes merge and at other times split.  Among the most prominent Protestant theologians of the late twentieth century are Wolfhart Pannenberg, Jurgen Moltmann, John R, Stott, Thomas F. Torrance, J. I. Packer, and E. Jungel.

I am then classed even further by my adherence to Evangelicalism.  It is one of the main strands of Protestant Christianity.  Its distinguishing marks are acceptance of scriptural authority as binding on Christians, personal commitment to Jesus Christ, and adherence to historic Trinitarianism.  In almost all countries, Evangelicals are pitted against the liberals, and there are divisions between conservatives and liberals even within Evangelicalism.  The Laodicean character of the liberal churches, as contrasted with the earnestness of the Evangelicals, has helped the latter gain an edge in terms of converts and growth.

Evangelicals have been on the forefront of the missionary movement.  The Church Missionary Society in England and the British and Foreign Bible Society owe their origins to Evangelicals.  In the nineteenth century, Evangelicalism received a boost from the revivalist movements and from the Keswick Convention.  With Evangelicalism’s twin focus of world missions and personal consecration, the social gospel (a theological movement in North America in the nineteenth and twentieth centuries emphasizing social improvement  over propagation of the Gospel) has disappeared from its horizon.  In the post WWII period, the conservative Evangelicals have spearheaded a revival under the leadership of John Stott, Martyn Lloyd-Jones, Carl Henry, and others.  The crusades of Billy Graham, the Charismatic movement, the impact of Inter-Varsity Fellowship among students, the popularity of theology as an academic discipline, and experiments in new forms of worship and evangelism have contributed to the phenomenal growth of Evangelicalism.

Now on to the challenge itself, which, the self-definition above will exemplify the main points. When I first cam across the argument myself, it was 33,000 denominations, which “WAR_EAGLE” points out is a fluctuating number in his concise refutation of this number:

This morning, an atheist poster was kind enough to provide us with yet another refutation of the “33,000 denominations” lie and I just thought I’d share it with you here, since he is not able to share that here.

Among The Criticism’s Of The Methodology Used To Arrive At That Ever Fluctuating Number:

It is thus incorrect to say that these figures indicate more than 40,000 different beliefs. It is impossible to tell how many differences in belief there would be, and probably impossible even to define. But it would certainly be far less than the 43,000 figure.

The denominations measured in these two reports are not indicators of separate belief, and quoting them as such is a mis-statement of the data. Due to the large number of independent churches, it is impossible to know how much christian belief varies beyond that defined by the 40 or so groups listed in Wikipedia.

In the above challenge of 40,000 denominations… Jehovah’s Witnesses, Latter-Day Saints (Mormons), and other cults are included in the number. Using the same criteria found in the ever-changing large number we see how the criteria works out to an INFLATED NUMBER: Please realize, this includes “Gnostics” (!), Mormons (122 denominations worth!) and Jehovah’s Witnesses (228 denominations)! No Christian church would include them as a “Christian denomination,” unless infected by a form of liberalism that causes a universal viewpoint. That is, all people are going to heaven. This question about denominations comes up often by Mormons. They typically claim they are the one true church… but there are well over 40-factions of Mormonism (“denominations”). How do they themselves distinguish what is true?

Even the Roman Catholic church has 242 “denominations.” (See Dr. White’s presentation near the bottom)

Here is a good concluding remark of a larger response:

Denominations were probably not Christ’s first choice for His church. We recall His prayer that His church would be one (John 17:20-21), and can imagine that He would have preferred for His church to remain fully unified for the cause of Christ. But denominations came to help serve the purpose of God in many important ways:

Thank God there will be no denominational divisions in Heaven, only those who have agreed upon their faith in the precious atoning blood of Jesus Christ.

An historical analogy for one of the bullet points above may help. If the world was made up of a “Pangaea” of a country (one country/one world order), it would be impossible to stop a “Hitler” or Mao,” or “Stalin” conquering said world. But because the world is divided into different cultures, languages, and the like… it is near impossible for a tyrant to overthrow the world. (Which is one reason why a “united Europe” is looked upon as a net negative.) 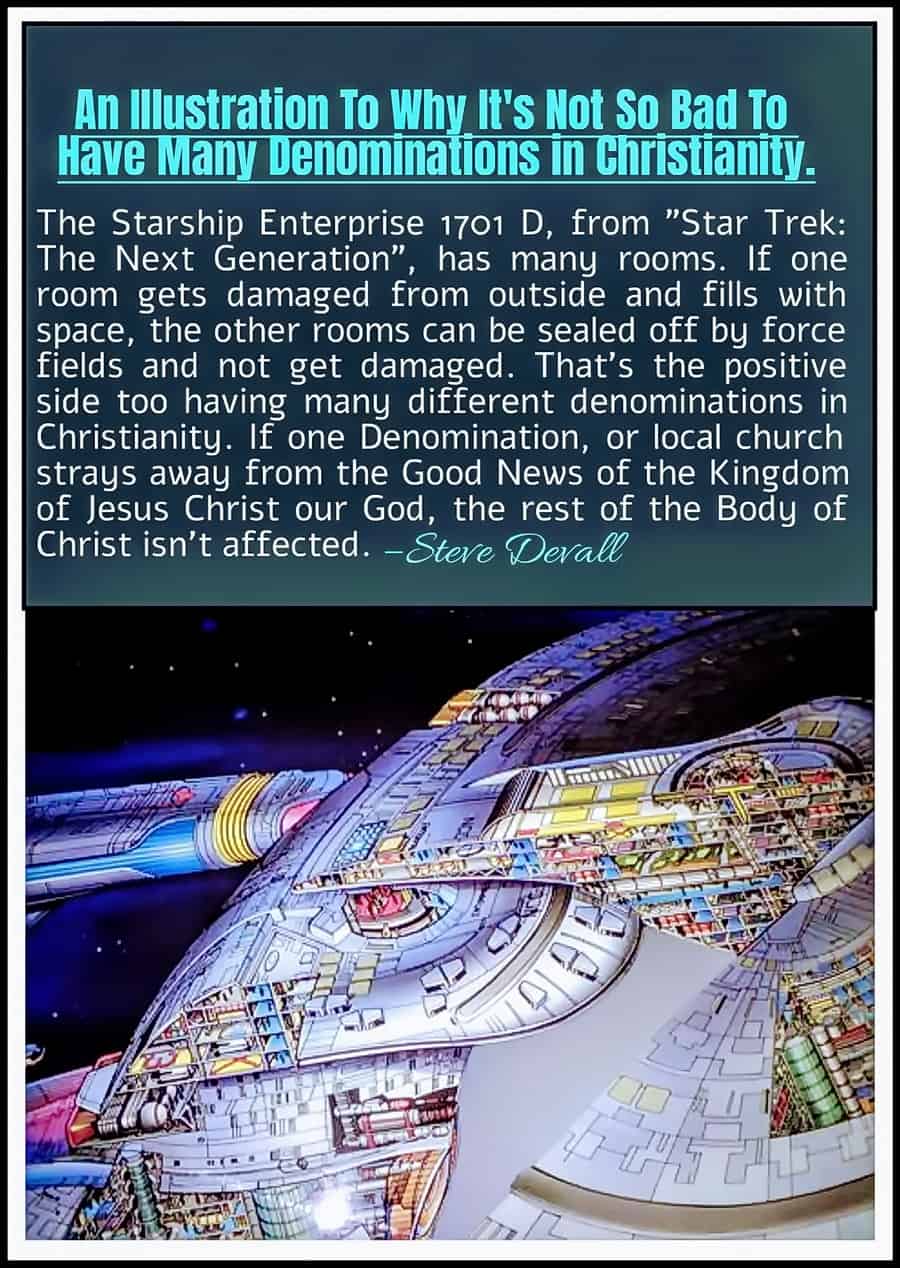 Similarly, as was already pointed out, these many denominations “helped to filter out the spread of harmful heresies and false doctrines.”

There are of course NEGATIVE VIEWS of the “many denominations,” but all-in-all, it is not a very good challenge to a thoughtful Christian that the many denominations are somehow evidence that Christianity is not true, is a battle Catholics have lost FOR A WHILE NOW.

I hope this helps.