A new study warns that a value-added tax would kill 850,000 jobs in a year and cut retail spending by $2.5 trillion over 10 years. Sounds too bad for Washington to pass up.

An analysis for the National Retail Federation by Ernst & Young finds that adding a VAT to the U.S. tax system would reduce GDP for years, causing the loss of “850,000 jobs in the first year,” plus “700,000 fewer jobs 10 years later.”

If you are not aware of what the Value Added tax is (VAT), Dick Army explains it a bit:

“It’s not going to be a VAT instead of – it’s in addition to, and, of course, they are doing exactly what I predicted. Why? Because they’ve got gluttonous spending habits, and they want to spend more, and they need to raise money to do it, and they can’t raise the money out in front of God and everybody for the taxpayer to recognize what they’re doing,” he said.

“So they are looking at that best instrument to hide the tax from the taxpayer. And that’s why the VAT tax is attractive. The VAT tax has never been attractive to anybody except tax leviers,” Armey added.

The VAT is a general sales tax added to the price of goods and services at each step of production whenever value is added to those goods and services. According to the Tax Policy Center, the VAT was first imposed by France in 1948 and then by the European Community (EC) in 1968. To date, over 100 countries impose some form of a VAT except Australia and the United States.

VAT is a good idea (flat tax is the best) if you abolish the income and state taxes all-together. But the Democrats want to add this tax ON TO the already existing tax matrix, thus, hurting the poor the most. Charles Krauthammer has been saying almost immediately after liberal-care (Obama-care) passed. Here is his article on the issue:

…We are now $8 trillion in debt. The Congressional Budget Office projects that another $12 trillion will be added over the next decade. Obamacare, when stripped of its budgetary gimmicks — the unfunded $200 billion­–plus doctor fix, the double-counting of Medicare cuts, the ten-six sleight-of-hand (counting ten years of revenue and only six years of outflows) — is, at minimum, a $2 trillion new entitlement.

It will vastly increase the debt. But even if it were deficit-neutral, Obamacare would still pre-empt and appropriate for itself the best and easiest means of reducing the existing deficit. Obamacare’s $500 billion of Medicare cuts and $600 billion in tax hikes are no longer available for deficit reduction. They are siphoned off for the new entitlement of insuring the uninsured.

This is fiscally disastrous because, as President Obama himself explained last year in unveiling his grand transformational policies, our unsustainable fiscal path requires control of entitlement spending, the most ruinous of which is out-of-control health-care costs.

What will it recommend? What can it recommend? Sure, Social Security can be trimmed by raising the retirement age, introducing means testing, and changing the indexing formula from wage growth to price inflation.

But this won’t be nearly enough. As Obama has repeatedly insisted, the real money is in health-care costs — which are now locked in place by the new Obamacare mandates.

That’s where the value-added tax comes in. For the politician, it has the virtue of expediency: People are used to sales taxes, and this one produces a river of revenue. Every 1 percent of VAT would yield up to $1 trillion a decade (depending on what you exclude — if you exempt food, for example, the yield would be more like $900 billion).

It’s the ultimate cash cow. Obama will need it. By introducing universal health care, he has pulled off the largest expansion of the welfare state in four decades. And the most expensive. Which is why all of the European Union has the VAT. Huge VATs. Germany: 19 percent. France and Italy: 20 percent. Most of Scandinavia: 25 percent.

Ultimately, even that won’t be enough. As the population ages and health care becomes increasingly expensive, the only way to avoid fiscal ruin (as Britain, for example, has discovered) is health-care rationing.

It will take a while to break the American populace to that idea. In the meantime, get ready for the VAT. Or start fighting it.

In this article Charles Krauthammer tackles this idea and shows throughout ours and others cultural histories this is a well known “law.” Charles:

A place is made sacred by a widespread belief that it was visited by the miraculous or the transcendent (Lourdes, the Temple Mount), by the presence there once of great nobility and sacrifice (Gettysburg), or by the blood of martyrs and the indescribable suffering of the innocent (Auschwitz).

To say this is about religious freedom and Muslim’s have just as much right as anyone else to practice their religion are non-sequiturs.

Sacred Ground and History Combined with the Common Sense from Papa Giorgio on Vimeo.

When we speak of Ground Zero as hallowed ground, what we mean is that it belongs to those who suffered and died there — and that such ownership obliges us, the living, to preserve the dignity and memory of the place, never allowing it to be forgotten, trivialized or misappropriated.

That’s why Disney’s 1993 proposal to build an American history theme park near Manassas Battlefield was defeated by a broad coalition that feared vulgarization of the Civil War (and that was wiser than me; at the time I obtusely saw little harm in the venture). It’s why the commercial viewing tower built right on the border of Gettysburg was taken down by the Park Service. It’s why, while no one objects to Japanese cultural centers, the idea of putting one up at Pearl Harbor would be offensive.

And why Pope John Paul II ordered the Carmelite nuns to leave the convent they had established at Auschwitz. He was in no way devaluing their heartfelt mission to pray for the souls of the dead. He was teaching them a lesson in respect: This is not your place; it belongs to others. However pure your voice, better to let silence reign…

…Location matters. Especially this location. Ground Zero is the site of the greatest mass murder in American history — perpetrated by Muslims of a particular Islamist orthodoxy in whose cause they died and in whose name they killed.

Of course that strain represents only a minority of Muslims. Islam is no more intrinsically Islamist than present-day Germany is Nazi — yet despite contemporary Germany’s innocence, no German of goodwill would even think of proposing a German cultural center at, say, Treblinka.

Which makes you wonder about the goodwill behind Imam Feisal Abdul Rauf’s proposal. This is a man who has called U.S. policy “an accessory to the crime” of 9/11 and, when recently asked whether Hamas is a terrorist organization, replied, “I’m not a politician. . . . The issue of terrorism is a very complex question.”

America is a free country where you can build whatever you want — but not anywhere. That’s why we have zoning laws. No liquor store near a school, no strip malls where they offend local sensibilities, and, if your house doesn’t meet community architectural codes, you cannot build at all.

These restrictions are for reasons of aesthetics. Others are for more profound reasons of common decency and respect for the sacred. No commercial tower over Gettysburg, no convent at Auschwitz — and no mosque at Ground Zero….

This post should be understood in the context as well that “part of the landing gear from the first plane to hit the Twin Towers rammed through the roof of the Burlington Coat factory, which is now going to be the ground-zero mosque.” Parts of people were found on the roof of the building as well. 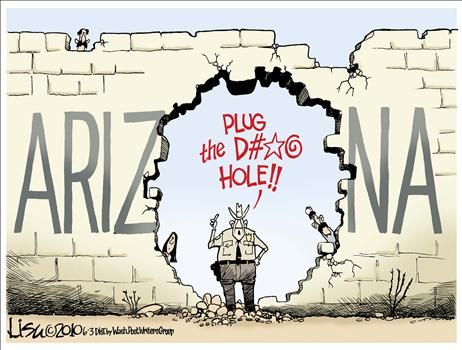 This rash politicization of education is being met with resistance, but here’s what supporters of the proposed curriculum had to say:

According to its press release, “The Los Angeles Board of Education also requested that Superintendent Ramon Cortines ensure that civics and history classes discuss the recent laws with students in the context of the American values of unity, diversity and equal protection for all people.”

“America must stand for tolerance, inclusiveness and equality,” said Board President Monica García, according to the release. “In our civics classes and in our hallways, we must give life to these values by teaching our students to value themselves; to respect others; and to demand fairness and justice for all who live within our borders. Any law which violates civil rights is un-American.”

Very telling that “rule of law” was not one of the “American values” mentioned. 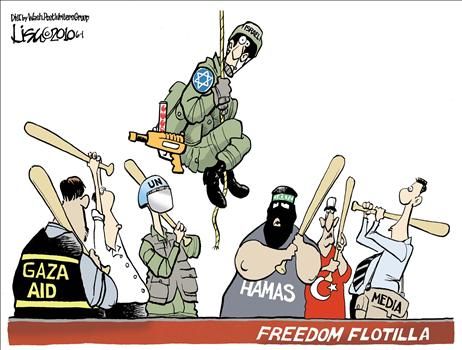 Minnesota Congresswoman Michele Bachmann was quoted in Politico hammering the administration for pulling away from Israel. 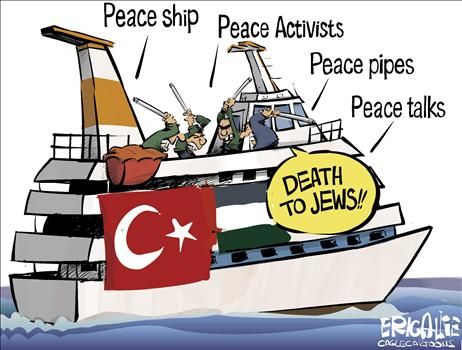 The Dutch government is condemning Israel’s defensive action against the Hamas/Al Qaeda terrorist vessel that entered its waters. However, one Dutch politician is standing against the tide.

From the Dutch News, June 1:

MPs from across the political spectrum, even those traditionally supportive of Israel, have said they were shocked by Israel’s actions.

However, PVV MP Geert Wilders said it is ‘cheap’ to attack Israel. ‘I am certainly not going to make a cheap attack on Israel by howling in the woods with the rest of the wolves,’ he told tv show Nova.

Israel was fully justified in entering the ships to see if they were also carrying weapons, he said. 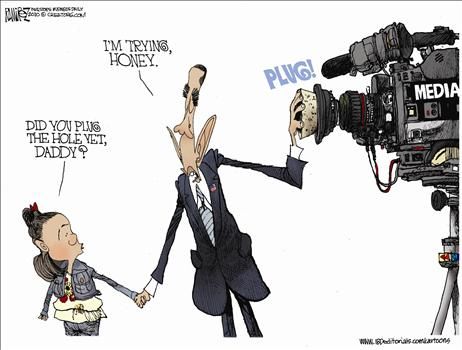 The GOP immediately blasted back, accusing the president of trying to distract attention from the ongoing catastrophe in the Gulf of Mexico. 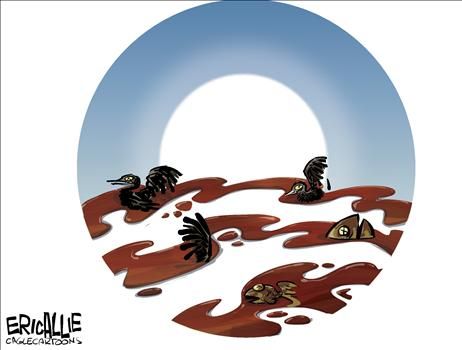 Many reasons, but this one goes unmentioned: Environmental chic has driven us out there. As production from the shallower Gulf of Mexico wells declines, we go deep (1,000 feet and more) and ultra deep (5,000 feet and more), in part because environmentalists have succeeded in rendering the Pacific and nearly all the Atlantic coast off-limits to oil production. (President Obama’s tentative, selective opening of some Atlantic and offshore Alaska sites is now dead.) And of course, in the safest of all places, on land, we’ve had a 30-year ban on drilling in the Arctic National Wildlife Refuge.

So we go deep, ultra deep — to such a technological frontier that no precedent exists for the April 20 blowout in the Gulf of Mexico.

There will always be catastrophic oil spills. You make them as rare as humanly possible, but where would you rather have one: in the Gulf of Mexico, upon which thousands depend for their livelihood, or in the Arctic, where there are practically no people? All spills seriously damage wildlife. That’s a given. But why have we pushed the drilling from the barren to the populated, from the remote wilderness to a center of fishing, shipping, tourism and recreation?

Not that the environmentalists are the only ones to blame. Not by far. But it is odd that they’ve escaped any mention at all.

The other culprits are pretty obvious. It starts with BP, which seems not only to have had an amazing string of perfect-storm engineering lapses but no contingencies to deal with a catastrophic system failure.

However, the railing against BP for its performance since the accident is harder to understand. I attribute no virtue to BP, just self-interest. What possible interest can it have to do anything but cap the well as quickly as possible? Every day that oil is spilled means millions more in losses, cleanup and restitution….

….Well, when you anoint yourself King Canute, you mustn’t be surprised when your subjects expect you to command the tides.

(A disaster with many fathers) 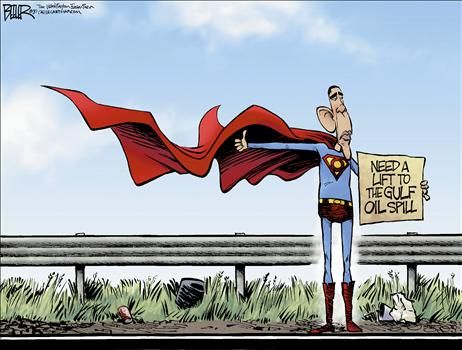